Secret Service knew of Capitol threat more than a week before Jan. 6 riot 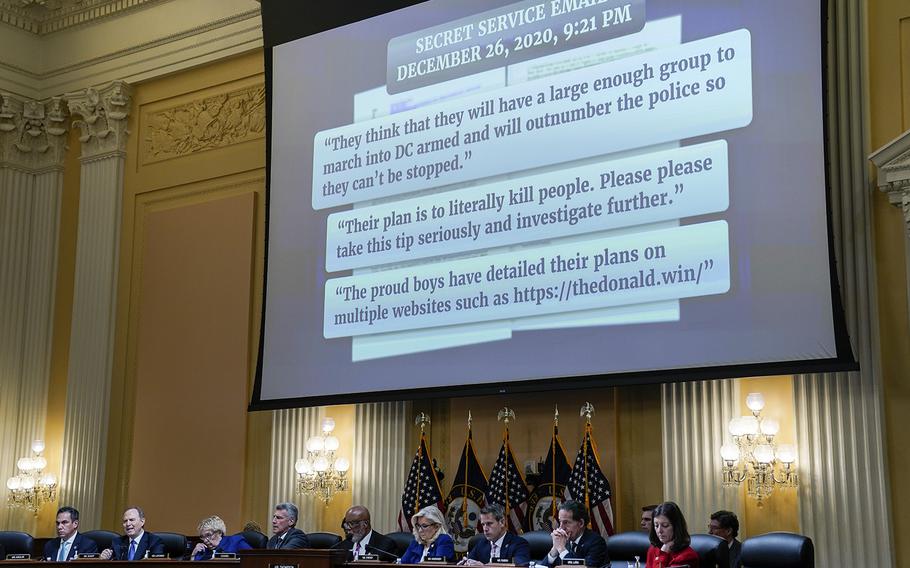 Secret Service emails are displayed during a hearing on Capitol Hill on Thursday, Oct. 13, 2022, as the House select committee investigates the Jan. 6, 2021, attack on the U.S. Capitol. (Jabin Botsford/Washington Post)

The Secret Service had warnings earlier than previously known that supporters of President Donald Trump were plotting an armed attack on the Capitol on Jan. 6, 2021, according to records revealed in a congressional hearing Thursday.

Secret Service agents in charge of assessing the risks around the protests had been tracking online chats on pro-Trump websites and noted that rallygoers were vowing to bring firearms, target the Capitol for a siege and even kill Vice President Mike Pence.

As early as Dec. 26, Secret Service officials were sharing one tipster's warnings about extremist groups coming to the Capitol with murderous plans. "They think they will have a large enough group to march into DC armed and will outnumber the police so they can't be stopped," the tip read.

"Their plan is to literally kill people," the tipster wrote. "Please, please take this tip seriously and investigate further."

The evidence presented at the hearing adds the Secret Service to a long list of national security agencies who received prescient warnings about the assault protesters planned for Jan. 6, yet failed to respond with urgency or cohesion to prevent the riot.

Committee member Rep. Adam Schiff (D-Calif.) said the new details - retrieved in internal emails from a trove of more than a 1 million records the Secret Service provided the Jan. 6 committee - raise questions about how the agency shared its intelligence and whether officials have been forthright about their knowledge of the warnings.

"As we have seen, the Secret Service and other agencies knew of the prospect of violence well in advance of the president's speech at the Ellipse," Schiff said during the hearing. "Despite this, certain White House and Secret Service witnesses previously testified that they had received no intelligence about violence that could have potentially threatened any of their protectees on January 6th, including the vice president. Evidence strongly suggests that this testimony is not credible."

In a statement, Secret Service Deputy Director Faron Paramore noted that the agency is not a "member of the Intelligence Community" and said it had shared its information widely with others.

"In the weeks leading up to Jan. 6, Secret Service was in constant communication and sharing information with our law enforcement partners in the Washington, D.C., area regarding available protective intelligence and open-source information concerning potential violence," said Paramore.

Much of the intelligence cited in Thursday's hearing was alarming in its specificity. One Secret Service unit, Schiff said, flagged a social media account on a pro-Trump site that threatened to bring a sniper rifle to Washington.

In a Dec. 30 email, a Secret Service agent warned of Trump supporters' online threats, noting the U.S. Marshals Service was "seeing a lot of violent rhetoric directed at government people, entities, in addition to our protected persons." The protected person most targeted for attack: the vice president.

On the morning of the rally, Schiff noted, the Secret Service knew many of the protesters in the crowd on the Ellipse had weapons, but it's unclear what steps the agency took as a result. It is a crime to carry a firearm on federal property. Trump was scheduled to speak a little after noon.

Secret Service units shared reports from police that morning that they had seen rallygoers with firearms, including a Glock, a pistol, and a rifle. They knew D.C. police had reportedly detained a person carrying an assault rifle.

At the same time, they were getting reports of death threats against Pence, who had just entered the U.S. Capitol that morning to perform his role in certifying the election.

"Alert at 1022 regarding VP being a dead man walking if he doesn't do the right thing," one Secret Service email warned at 10:39 a.m.

By 12:36, as Trump took the stage, one Secret Service employee emailed another about the barely hidden threat all around them.

"With so many weapons found so far, you wonder how many are unknown" one Secret Service employee wrote to a colleague. "Could be sporty after dark," he wrote, referring to the chance for gun battles.

"No doubt," his colleague wrote back. "The people at the Ellipse said they are moving to the Capitol after the POTUS speech."