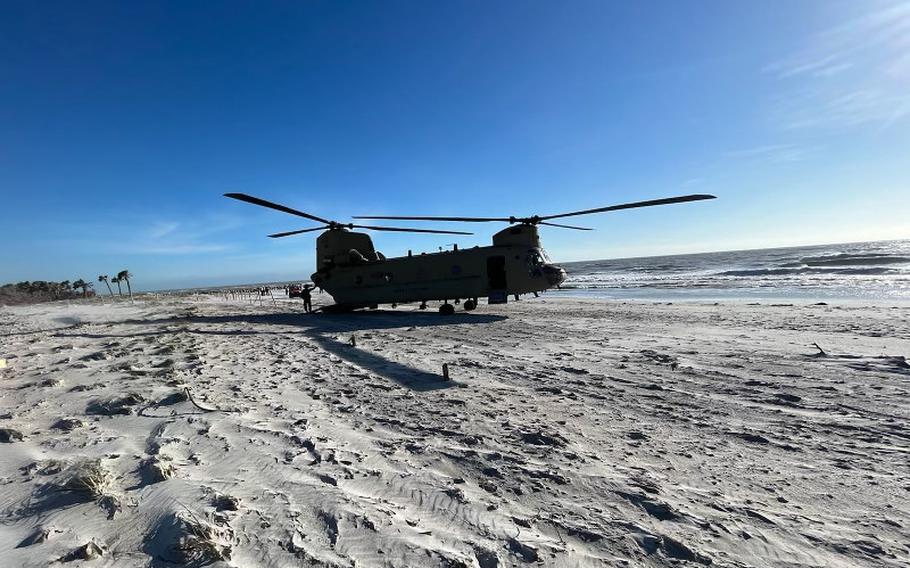 ATLANTA — U.S. service members were working “around the clock” Friday to clear debris and rescue stranded people in at least 20 Florida counties hit by Hurricane Ian, military officials said as the storm made its second landfall in South Carolina.

The military closed bases in coastal Georgia and across the Carolinas on Friday as Ian, which left a path of destruction this week from southwest to northeast Florida, struck South Carolina about 60 miles northwest of Charleston. About 90 South Carolina National Guard members were already on state active-duty Friday to respond rapidly with high-water vehicles once the storm passed, Guard officials in that state said.

In Florida, Guard troops from across the nation joined in response efforts that spanned from the peninsula’s southwest to its northeast coast, after Ian slowly moved across the state flooding the region with rain and seawater. The storm struck initially just south of Florida’s Fort Myers on Wednesday before moving into the Atlantic Ocean as a tropical storm and reforming into a hurricane late Thursday.

The National Guard response grew to nearly 7,000 troops Friday, as Guard members from at least 10 states flowed into the peninsula joining about 5,000 Florida Guard members in their storm efforts, the military said. Those troops were working across the state on missions including route clearance, search-and-rescue, and security operations, according to Florida Gov. Ron DeSantis’ office.

Guard troops were working together in many cases with Coast Guard responders on search and rescue operations on the ground and in the air, said Vice Adm. Peter Gautier, the Coast Guard’s deputy commander for operations.

By Friday afternoon, Coast Guard troops had rescued some 117 individuals in Florida largely via helicopter and the use of shallow water boats, he said. A number of pets had also been recovered in the hours since Ian’s arrival, Gautier said.

“Coast Guard responders continue around the clock operations,” he told reporters Friday at the Federal Emergency Management Agency headquarters in Washington. “Those operations are going to continue for as long as it takes to rescue everyone.” Florida Army National Guard Soldiers from the 153rd Financial Management Support Unit, are called to support the St. Augustine Fire Department for search and rescue efforts in the evening hours of September 29, 2022. The Florida National Guard has been responding with and supporting state and local officials during the aftermath of Hurricane Ian. (Staff Sgt. Leia Tascarini)

The admiral also said Coast Guard members in South Carolina were already staged to respond quickly with search and rescue operations in that state once the storm passed.

The National Hurricane Center warned that record river flooding would continue “through next week” across several areas of central Florida. Despite downgrading the storm Friday evening to a post-tropical cyclone in the hours after Ian struck South Carolina, the hurricane center said more flooding was likely in parts of coastal South Carolina, coastal and northwest North Carolina and southern Virginia into the weekend.