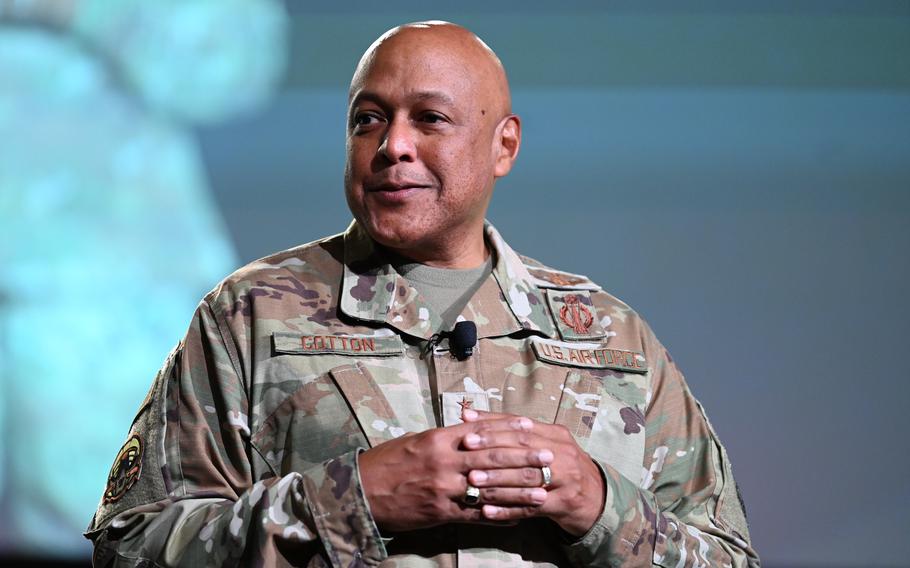 Air Force Gen. Anthony Cotton is pictured on Aug. 17, 2022, speaking with airmen during a symposium in San Antonio. Cotton has been nominated to be the next top commander of U.S. Strategic Command. (U.S. Air Force photo by Master Sgt. Jarad A. Denton)

WASHINGTON — The nation’s nuclear arsenal is helping constrain Russia’s actions in Ukraine and could serve as a bulwark against a Chinese takeover of Taiwan, the nominee to lead U.S. Strategic Command said Thursday.

“I absolutely believe that our nuclear deterrent force held,” he told the Senate Armed Services Committee. “We did not see Russia do anything with our NATO partners. We may have heard the rhetoric, but I think at the end of the day, Russia and China both understand that we have a strong, resilient nuclear force that is offering deterrence to ourselves and extended deterrence to our allies.”

Ukraine’s top general, Valeriy Zaluzhnyi, warned in an article last week that there is a “direct threat” of Russia resorting to nuclear weapons in Ukraine and drawing other powers into a “limited” nuclear conflict, according to the Ukrainian news agency Ukrinform.

Russa’s foreign ministry said last month that Moscow had “no need” to use nuclear weapons in its war against Ukraine and had no interest in a direct confrontation with NATO or the U.S. In the weeks since, the Kremlin has suffered a humiliating retreat from advancing Ukrainian forces in the country’s northeast region.

“I think as we look at the war in Ukraine and some of [Russian President] Vladimir Putin’s statements, there is a renewed concern about what the use of nuclear weapons would mean,” Shaheen said.

Cotton, the commander of Air Force Global Strike Command, emphasized his commitment to deterrence if he is confirmed to lead STRATCOM and oversee the nation’s nuclear arsenal.

He agreed with Sen. Josh Hawley, R-Mo., that a nuclear deterrent combined with conventional warfare denial methods should work “hand-in-hand” to obstruct adversaries such as China. In a private conversation with Hawley on Tuesday, Cotton said China might not escalate an attack on Taiwan if its forces are prevented from entering the Taiwan Strait and Beijing is also made aware of America’s nuclear capabilities, according to Hawley.

Cotton said the U.S. needs to recalibrate its nuclear defense strategy to reflect the rising power of China, which has for the first time put the U.S. in three-way nuclear competition. China’s nuclear weapon development has been astonishingly quick since 2018, he said.

“We have seen the incredible expansiveness of what they’re doing with their nuclear force. … They have a bona fide triad now,” Cotton said, referring to a nuclear force structure consisting of land-launched nuclear missiles, nuclear-missile-armed submarines and aircraft with nuclear bombs and missiles. “We’re going to have to understand more deeply the Chinese nuclear strategy.”

Cotton said he supports accelerating the modernization of the U.S. nuclear triad though he agreed with Sen. Mazie Hirono, D-Hawaii, that the U.S. also has a leading role to play in preventing a new nuclear arms race.

He declined to take a position on the controversial sea-launched cruise missile program launched by the administration of former President Donald Trump. The White House wants to scrap the program for being costly and redundant while top Pentagon officials such as Army Gen. Mark Milley, chairman of the Joint Chiefs of Staff, and Adm. Charles Richard, the current STRATCOM commander, want to keep it.

“I would like to make an assessment on that, if it is able to meet that capability gap that is there. I’d like to be able to see that and assess that so I can make my best military assessment,” Cotton said. “I am not familiar with that weapons system, the specifics of what it can do.”

He also declined to speculate on whether a nuclear war was in the realm of possibility. Sen. Tom Cotton, R-Ark., noted many thought another ground war in Europe was unthinkable until it suddenly wasn’t.

“If confirmed, the role that I would play as commander is to make sure that those 150,000 men and women that are supporting Strategic Command are prepared to do what some folks might think is the unthinkable,” the general said.