Renaming nine Army bases linked to the Confederacy could cost more than $21 million, according to a commission appointed to study the issue. More than 1,100 Defense Department assets have been identified as honoring the Confederacy and it could cost roughly $62.5 million to rename all of them, according to the commission tasked with examining the issue.   (Library of Congress)

More than 1,100 Defense Department assets have been identified as honoring the Confederacy and it could cost roughly $62.5 million to rename all of them, according to the commission tasked with examining the issue.

Members of the congressionally mandated Naming Commission said Tuesday that the group has finished its report and briefed the House and Senate Armed Services committees on its findings. The third — and final — section of the report will be available soon to the public. It focuses on the final costs associated with renaming all assets that the group identified — a number that has increased since the commission began its work — and all recommendations associated with assets not covered by the previous two sections.

The first two sections outlined the renaming of the nine Army bases that bear Confederate-linked names, which is expected to cost about $21 million, and the second focused on the U.S. Military Academy and the Naval Academy, which will cost about $451,000.

“Our goal was to inspire everyone in the Department of Defense, local communities and the nation with names that have meaning,” retired Brig. Gen. Ty Seidule, vice chairman of the commission, said during a call with reporters. “All of us previously have taken the oath of office to support and defend the Constitution of the United States against all enemies, foreign and domestic. That oath was written in 1862 as an anti-Confederate oath. It seems appropriate that we all took that oath again for this mission.”

The final section recommends the Navy rename two ships, the USS Chancellorsville and USNS Maury, the Air Force rename Fort Fisher Recreation Area in North Carolina and the Army to strip the Confederate Memorial at Arlington National Cemetery in Virginia to its base. 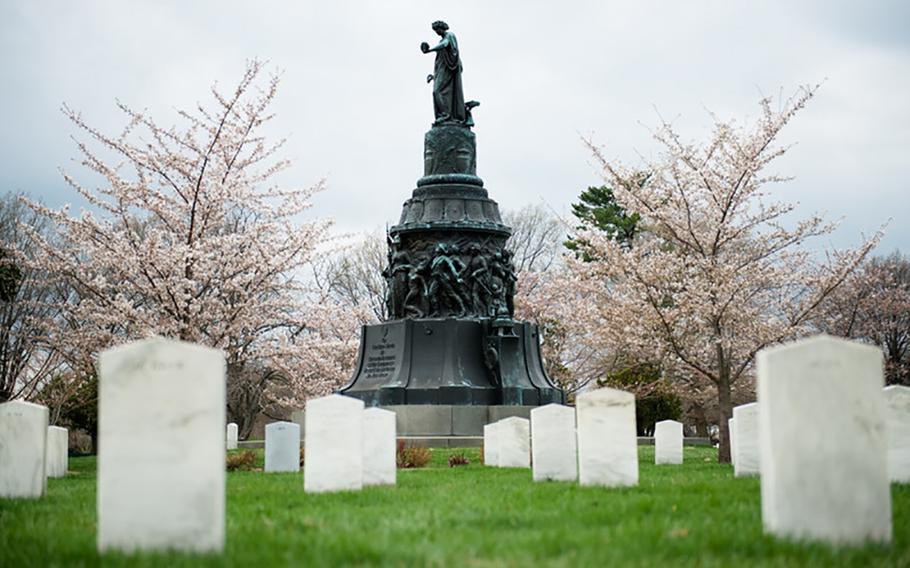 It also suggests the Army review renaming Fort Belvoir in Virginia, which was renamed from Camp Humphreys in 1935 as a direct commemoration of the plantation that once operated on the land.

The commission did not recommend new names for the Navy’s ships because that is a job done regularly by the service’s secretary, Seidule said. The Chancellorsville, a guided-missile cruiser, references a Confederate victory during the Civil War and the Maury, an oceanographic survey ship, honors Matthew Fontaine Maury who resigned from the U.S. Navy to fight with the Confederacy. The Air Force’s Fort Fisher site is named for a Confederate stronghold of the Civil War that honored Charles Frederick Fisher, who served as a colonel in the Confederate army and died in battle in 1861.

The memorial at Arlington was built in 1914 and is “problematic from the beginning to the end,” Seidule said. Designed by a Confederate veteran, the monument depicts a “mythologized version of the Confederacy, including highly sanitized depictions of slavery,” according to the cemetery’s website. It also includes a quote that describes the South’s secession as noble.

The commission was given more than $2.3 million in funding to conduct its examination, but said it only spent a quarter of it, roughly $612,500. It will return the remaining $1.7 million, according to its members. The group’s work lasted 19 months and included 32 meetings, 11 in-person visits to Army posts and nine virtual visits, Seidule said.

Defense Secretary Lloyd Austin has until Jan. 1, 2024, to implement the recommendations, should he choose to do so. The deadline is also included in the National Defense Authorization Act, which sets priorities and spending for the Pentagon.

Retired Lt. Gen. Thomas Bostick, a commission member, said the group spoke with lawmakers on Tuesday about the importance of working with local communities where the Confederate-linked names are associated with nonmilitary assets, such as city streets and businesses.

“I think the bases are going to have to work with the communities together and that's why it was important, we believe, to have the communities involved, to hear their concerns and that they'll work this together,” he said about choosing new names for the nine Army bases.

“I don't think you'll see it change overnight, but we've got a deadline of Jan. 1, 2024, so I'm sure they'll set a plan and work towards it as quickly as they can,” Bostick said.

The commission recommended bases be allowed to work with local historical societies, societies, museums, and veteran associations to donate Defense Department assets that will be removed as part of the renaming process to those interested entities.