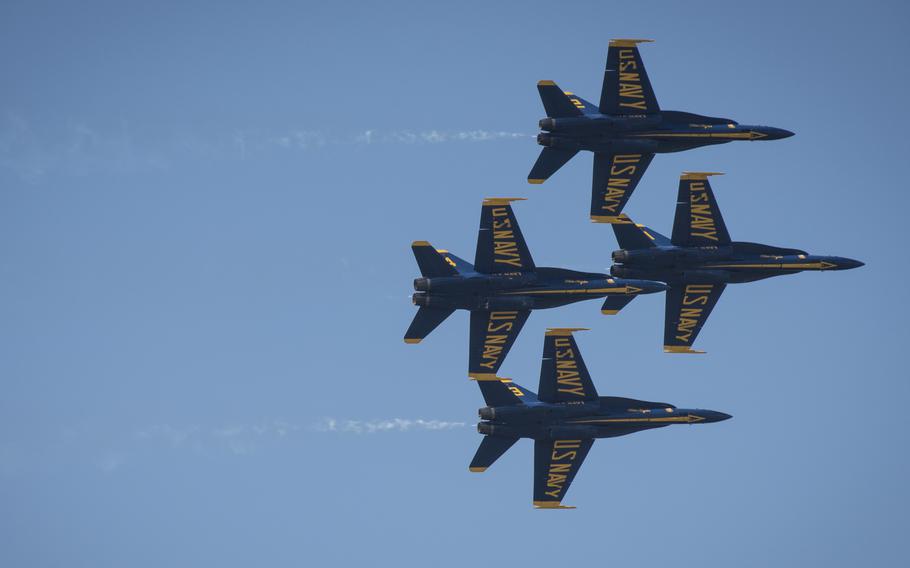 (Tribune News Service) — Over the course of Labor Day weekend, spectators will be immersed in the sights and sounds of vintage aircraft, which the Cleveland National Air Show describes as fully functioning time machines.

Headlining this year's show are the U.S. Navy Blue Angels, showcasing their new F/A-18 Super Hornets for the first time in Cleveland. The F/A-19 Super Hornet was featured in "Top Gun: Maverick."

The Blue Angels transitioned to the larger and more powerful jet platform in 2021. This marked the first time the team changed aircraft since they moved from the A-4 Skyhawk II to the F/A-18 Hornet back in 1986, according to Kim Dell, executive director of the show.

"Cleveland is a part of the Blue Angels' rich history," she said. "The newly minted Blue Angels made one of their first public appearances in the F8F-Bearcat at the 1946 National Air Races in Cleveland on Labor Day weekend."

The F/A-18 Super Hornets will be joined by the U.S. Air Force F-16 Viper Demonstration Team and more. Inside the gates, the public can witness the Blue Angels’ choreographed “walk down” preflight routine and feel the heat from ground-shaking pyrotechnics with a wall of fire.

Randy Ball will pilot the first Cleveland appearance of the MiG-17F. This was the primary enemy aircraft engaged in the skies over Vietnam and one of the first production jet fighters in the world with an afterburner — an auxiliary burner fitted to the exhaust system of a turbojet engine to increase thrust. The aircraft has been filmed on several occasions for the Discovery and History channels.

In addition, spectators can take a sentimental journey when the B-25D Mitchell Bomber "Rosie's Reply" takes to the skies. The B-25 has a distinctive shape with a low rumbling engine and was one of the most significant aircraft in World War II. Ground tours will provide attendees with a close-up look at the aircraft.

"The Cleveland Air Show is one of the oldest and most established annual air shows in the country starting with the National Air Races from 1929 to 1949 and continuing with the current day Air Show since 1964," Dell said.

Between 40,000 and 60,000 people are expected to come out to the show over the holiday weekend. The public will also watch the show not only from buildings, but boats and beaches, Dell said.

Presented by Discount Drug Mart, the air show will take place at Burke Lakefront Airport. Gates and the on-site parking lot will open at 9 a.m., Sept. 3-5. Spectators are being encouraged to arrive early to avoid traffic and ensure they see their favorite acts.

General admission tickets are $30 for adults or $35 after Aug. 29, $20 for children ages 6-11 and free for children 5 and younger. Popular seating options include reserved box seats, sponsor boxes, Barnstormer Club and Flight Deck Lodge. There is no entry or re-entry after 3 p.m.

There are no gate sales as tickets are available only in advance online.