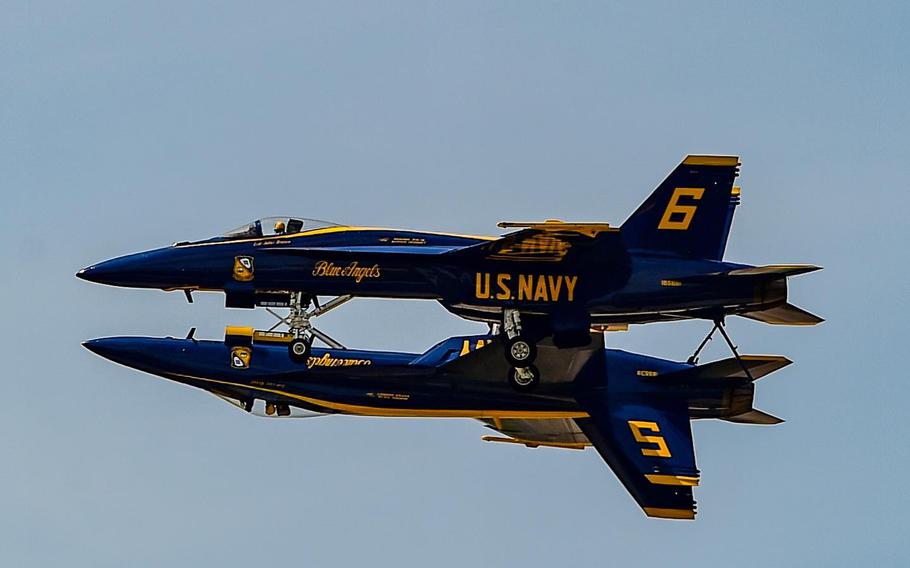 “I think it’s going to be more than 80,000, to be honest with you” when a final count is complete, Scott Buchanan, chairman of the U.S. Air and Trade Show, the event’s parent entity, said at a press conference.

Buchanan and show Executive Director Kevin Franklin acknowledged Monday that parking and traffic were a challenge in Vandalia and around the show this weekend, with a number of people roughly equivalent to six sold-out University of Dayton arenas being funneled into the area around Dayton International Airport over two days.

Buchanan said the show is working with the city of Vandalia to create new parking areas on city-owned land at some point. He declined to elaborate on that, saying, "There are more conversations to be had."

But air show parking has been a challenge over the years at times.

This year, all general admission parking was directed to one unpaved stretch of land off Northwoods Boulevard and North Dixie Drive across from the main show entrance. Compressing some 45,000 people — roughly Saturday's attendance — into three lanes of traffic toward one general admissions parking area was difficult.

"You can only push so many cars up I-75 and that one exit," Buchanan said.

Air show organizers on both Saturday and Sunday advised patrons to leave early and be patient.

Organizers attributed the strong turnout to great weather and a strong slate of attractions — the U.S. Navy Blue Angels flight demo squadron, more than 50 ground displays, including a B-52 Stratofortress from Barksdale Air Force Base, La., and much more.

Fly-bys courtesy of a pair of F-15s were also a treat.

The next show will be July 22-23, 2023. It will be the Air Force Thunderbirds' turn to be the event's headline act, although show officials made no announcement on that Monday.

In 2021, there were two areas for general admission parking, one off North Dixie with another on West National and Helke roads, both grass lots.

The show in 2019 tried shuttling people to the show, after rain made it difficult to park on the grass, but that created some delays.

In 2015, rain and foot traffic turned grass and dirt parking areas to mud, with organizers moving quickly to make alternative arrangements with nearby paved lots and shuttles on the show's second day.

When rain is heavy, parking in unpaved lots can be tricky. Late last year, organizers of the show applied for more than $600,000 in state or federal funding to establish paved parking for visitors.

"We are looking to create a new parking lot," show organizers said in an application to the Dayton Region Priority Development & Advocacy Committee (PDAC) last year. "We've experienced flooded lots in past years which has significantly impacted our show as we've had to implement remote parking."

"Remote parking significantly increases our costs because we have to shuttle everyone," the air show said in its PDAC application last year. "It also has a negative impact on the local economy because people are unable to attend the show and cannot spend time in the local community due to traffic delays."