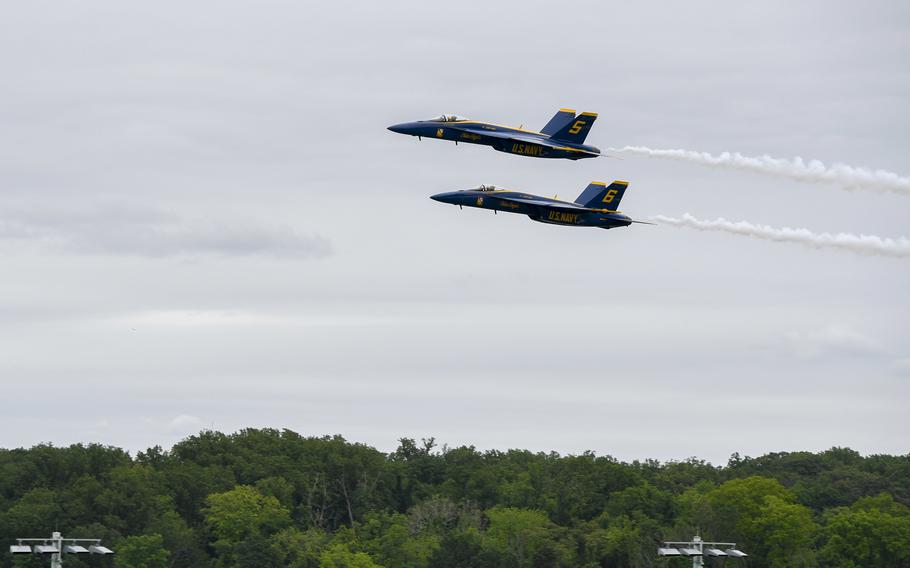 The Blue Angels, the U.S. Navy flight demonstration squadron, perform in F/A-18 Super Hornets at the U.S. Naval Academy during commissioning week, May 24, 2022. The Blue Angels will be the headliner at the Dayton Air Show, July 30-31 at Dayton International Airport. (Jordyn Diomede/U.S. Navy)

The show is July 30-31 at Dayton International Airport, and ticket sales have been strong. Chalet and Chairman’s Club seating is sold out. There were perhaps just 70 pavilion single seats available as of Wednesday — and that is not many.

“We’re feeling really good about where we’re at,” said Scott Buchanan, chair of the US Air and Trade Show Board of Trustees. “It will probably be one of the bigger shows that we’ve had in the last five to seven years, to be honest with you.”

Normally, sales for the Sunday show are a little slower. This year, that is not the case, said Kevin Franklin, executive director of the air show (and president of Wright Brothers Aero Inc.)

What essentially remains at this point are general admission tickets, both men said in an interview last week.

“I think we’re just about sold out of all of our seating,” said Franklin, who this spring succeeded longtime Dayton Air Show executive director Terry Grevious.

“It’s been a full court press for the last six months,” Buchanan said.

Attendance in a “good year” amounts to about 60,000 to 65,000 over a weekend. Jacquelyn Powell, a show board member as well as president and chief executive of the local Convention and Visitors Bureau, has told the Dayton Daily News that the economic impact attached to the annual show goes beyond the $2.32 million in direct spending.

But 2021 was unique — that early July weekend saw light but steady drizzle. And Buchanan and Franklin note that in the space of about a month last spring, the show went from an initially announced drive-in format to a more traditional set-up, which may have been confusing for would be show-goers.

“We were glad just to get a show in last year,” Buchanan said.

This year, he expects a greater number of static or ground displays. He points to the expected appearance of the de Havilland Vampire, making its Dayton debut, and Kent Pietsch, whom Buchanan called one of the best “stickflyers” in the country.

The show remains relevant symbolically and practically, said Tim Gaffney, who was involved with the show as a trustee and an aviation reporter for 35 years.

Flight exhibitions in Dayton stretch back to the early 1900s, when the Wright Brothers refined powered, piloted flight to the delight of spectators on Huffman Prairie. Well into the 21st century, the show continues to reflect the heritage and the character of the community, Gaffney said.

“That’s what these folks make,” Gaffney said. “It’s literally their work that we see on display.”

Gaffney remembered when the F-117 stealth fighter first visited the show as a static display in the early 1990s. The base brought a busload of workers to the show see the Lockheed plane in person.

“I remember one guy saying, ‘Yeah, I’ve been working on this for years, and this is the first time I’ve ever seen it,’” Gaffney recalled.

Tickets for the 2022 show are on sale at www.daytonairshow.com.