White House speeds monkeypox vaccines, but not everyone likes the pace 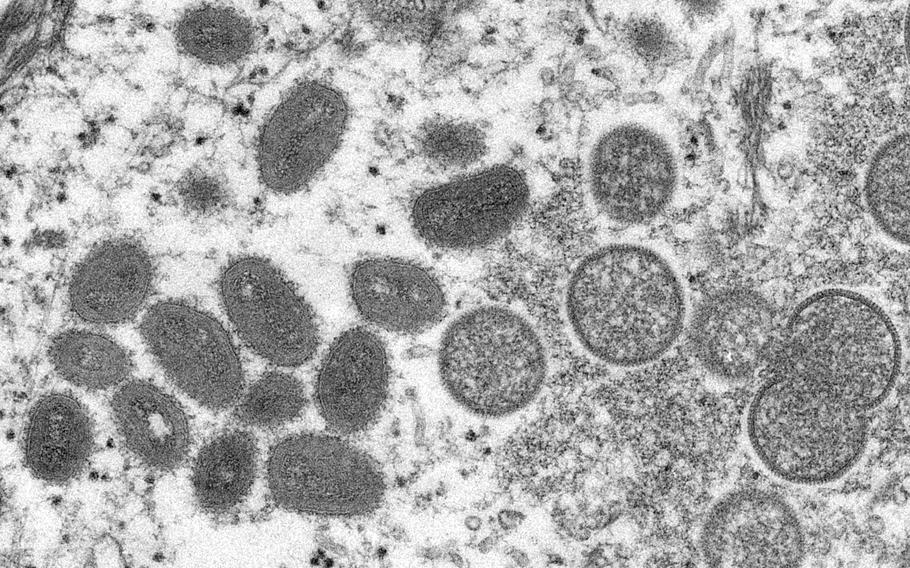 This electron microscopic (EM) image depicted a monkeypox virion, obtained from a clinical sample associated with the 2003 prairie dog outbreak. It was a thin section image from of a human skin sample. On the left were mature, oval-shaped virus particles, and on the right were the crescents, and spherical particles of immature virions. (Wikimedia Commons)

WASHINGTON — White House officials on Thursday touted steps to expand access to monkeypox vaccines, including a deal to finish 2.5 million vials in the United States. Although some local health officials applauded the moves, others were unnerved by a rapid plan to stretch existing supply by splitting vaccine doses into fifths, clamoring for more time to examine the data and train providers to deliver the shots correctly.

The Biden administration is "forcing our hand," said one local health official, who spoke on the condition of anonymity because they did not want to jeopardize vaccine orders. "It's extraordinarily frustrating because we have to execute and defend this strategy . . . it's just a question of giving us the time and the doses to bridge to that strategy."

A team of researchers also urged officials to tweak the plan, saying there was too little data on its effectiveness.

"We propose a mixed-dosing strategy," where all recipients will receive one shot as originally intended, and a second shot via the new approach, researchers from the Rapid Epidemiologic Study of Prevalence, Networks, and Demographics of Monkeypox Infection wrote in a letter to New York and federal officials that was shared with The Washington Post.

The debate over vaccination strategy comes as health officials are racing to vaccinate more than 1.6 million high-risk Americans against a virus that has sickened more than 14,100 people and often resulted in severe pain and other complications but no confirmed fatalities in this country. Cases have been overwhelmingly recorded in gay and bisexual men, who are prioritized for vaccination.

Administration officials have said they are moving to secure more vaccine doses, following criticism they had failed to obtain sufficient supply earlier in the outbreak. On Thursday, they and Danish vaccine maker Bavarian Nordic announced a deal to expedite 2.5 million vials by moving some production to a Michigan-based company, Grand River Aseptic Manufacturing. The first finished doses are expected later this year.

"This partnership between Bavarian Nordic and GRAM will significantly increase the capacity to fill and finish government-owned doses - for the first time in the United States - and allow us to deliver our current and future supply more quickly to locations nationwide," White House monkeypox coordinator Bob Fenton said in a statement.

Biden officials also sought to persuade critics of the vaccine-splitting plan by announcing an additional 1.8 million doses would be available for orders on Monday - if local leaders adopted the strategy to split each single-use vial into five and inject them under the top layer of the skin, known as intradermal vaccination.

Federal officials have said that the new approach will maximize available doses and is a safe alternative to the traditional way of injecting doses into the fatty tissue under the skin, known as subcutaneous vaccination. The Food and Drug Administration last week authorized the change in vaccination strategy, citing a 2015 study on its effectiveness.

"We're really moving to get all jurisdictions to intradermal dosing," said Rochelle Walensky, director of the Centers for Disease Control and Prevention, saying her agency was already working to educate providers on the new approach.

Some local officials have enthusiastically embraced the new vaccine strategy, saying it has allowed them to extend limited supplies.

"It's the only way that we can get enough vaccine to people to eliminate this outbreak," said David Holland, chief clinical officer for the Fulton County Board of Health in Georgia. Holland said he trusts the science behind the strategy, and health officials in his county, which includes Atlanta, have used the approach to vaccinate more than 800 people so far.

"There's a shortage of vaccines, so the thought of being able to get five doses out of a vial instead of one, given the huge demand that we're seeing for the vaccine, was very attractive," said Jim Mangia, CEO of St. John's Community Health in Los Angeles, which serves a predominantly African American and Latino population.

Mangia said his staff "mobilized immediately" after the FDA authorized the new approach Tuesday, holding a 7 a.m. training for staff on Wednesday morning and vaccinating more than 300 people with the method later that day. "I think using intradermal is a great way of getting more people vaccinated," he said.

But many other officials are seeking more time to prepare, said Marcus Plescia, chief medical officer at the Association of State and Territorial Health Officials, adding that he had been on calls with state and local officials who were pressing federal leaders for more data on the safety and effectiveness of the strategy.

"I think states just wanted a little bit more time to transition into it and make sure that they have things in place so they can be successful," Plescia said.

Officials such as Jennifer Avegno, New Orleans' top public health official, also questioned the White House's announcement that 1.8 million doses would become available next week without acknowledging that they had drastically cut the number of vials. She said her city was bracing for far fewer doses than expected after federal officials informed it that its allotment would amount to one-fifth of what had been planned since an additional four doses could be obtained from each vial under the new injection method.

"We are advocating to our federal partners to reconsider and restore Philadelphia's allocation of vaccine, which is urgently needed," Philadelphia Health Commissioner Cheryl Bettigole said Tuesday in a statement, adding that her department had "no choice" but to request that providers adopt the new vaccine strategy. "This is far from ideal in the midst of an outbreak."

The District announced last week it was expanding vaccine eligibility to include nonresidents and heterosexuals because officials expected 12,000 vials that could provide 60,000 doses. But then its allotments were cut to one-fifth of the original allocation.

The city had already mobilized to train all nurses in its public health system to administer shots intradermally, expecting it could vaccinate tens of thousands of additional people. "That's time, energy and money we could have devoted those resources to elsewhere because we were expecting a sudden influx of vaccine," Ashley said.

Biden administration officials separately announced a vaccination program targeted at people attending large LGBTQ events, saying that they would set aside 50,000 doses in a pilot initiative to cover high-risk individuals.

Louisiana heath officials welcomed the arrival of more vaccines in time for its Southern Decadence celebration early next month expected to draw thousands of gay men. But they said they've been raising alarms to federal officials since the early weeks of the outbreak and would have been better protected had they been able to administer more vaccines in mid-July.

"We're still not able to offer pre-exposure vaccine to everyone who is at risk," Joe Kanter, Louisiana's top public health official, told The Washington Post earlier this month. "And the longer we wait on that, the larger that at-risk population will grow. We really have this window of opportunity that is closing as we speak."

Kanter described Thursday's announcement as "welcome news" but said Louisiana officials are waiting to hear how many additional doses they will receive.

"We need to be taking every opportunity to be proactive in this outbreak instead of reactive," he said.

Meanwhile, Biden administration officials said they have been working with Bavarian Nordic on additional strategies to help increase its production capacity.

"They're a small manufacturer," Dawn O'Connell, head of the Administration for Strategic Preparedness and Response, which oversees the national stockpile of vaccines, said at a news briefing Thursday. O'Connell added that the administration was working with Bavarian Nordic on additional manufacturing capacity increases, such as "potentially working with a larger pharmaceutical company."

Administration officials have approached vaccine manufacturers such as Pfizer and Merck to partner with Bavarian Nordic, according to two people with knowledge of the conversations who spoke on the condition of anonymity because they were not authorized to comment.