More than a half billion doses of COVID vaccine made in Baltimore dumped, congressional panel finds 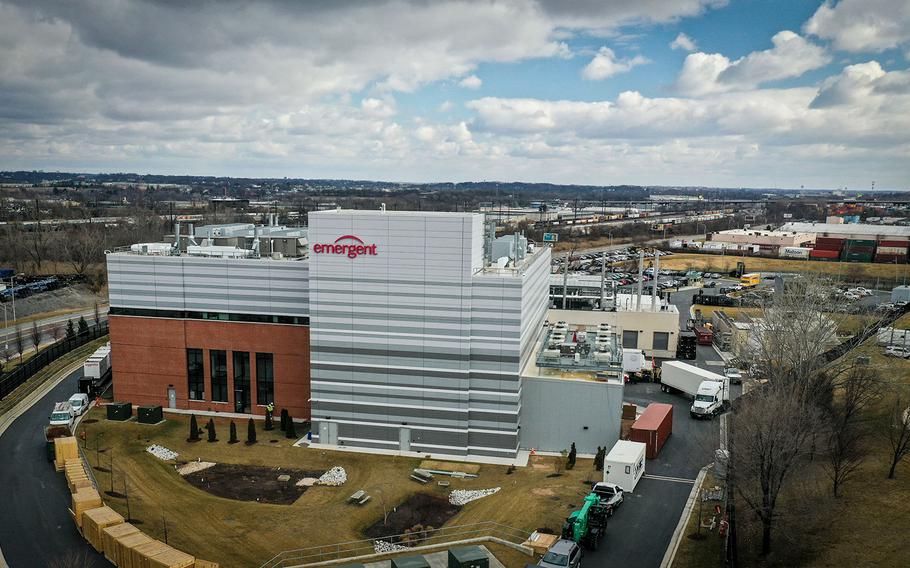 Emergent BioSolutions’ Bayview plant has a contract to bulk produce four COVID-19 vaccines that are not yet authorized but waiting in the wings, including one from Johnson and Johnson that appears close. The Bayview plant was built with government money for just such a pandemic need. (Jerry Jackson/Baltimore Sun/TNS)

BALTIMORE (Tribune News Service) —  The tally of wasted COVID-19 vaccine continues to climb at the troubled Emergent BioSolutions plant in East Baltimore and now exceeds a half billion doses, according to findings a congressional panel released Thursday on the manufacturer once central to the U.S. coronavirus pandemic response.

The new total includes an additional 135 million doses dumped over quality deficiencies that were discovered after operators of the Bayview facility had pledged to address problems identified by federal regulators and had resumed manufacturing.

“It is deeply disappointing that Emergent, after collecting millions in taxpayer dollars and having many months to fix the serious manufacturing problems plaguing their Baltimore facility, has yet to competently perform the essential task they committed to perform,” said Rep. James E. Clyburn, the chairman of the Select Subcommittee on the Coronavirus Crisis, which has been probing the plant’s issue for more than a year.

“Their continued failure has hampered vaccination efforts in areas of the world where vaccines are still in short supply,” the South Carolina Democrat said in a statement. “Emergent executives clearly have a great deal of work to do to eliminate these systemic problems at their company.”

Rockville-based Emergent had been given $163 million in 2015 to build and prepare the Baltimore plant to produce vaccine for any pandemic. Despite early warnings about readiness, investigators say officials in the Trump administration awarded Emergent a $628 million contract to make COVID-19 vaccines developed by AstraZeneca and Johnson & Johnson.

The Biden administration canceled the deal last year after the U.S. Food and Drug Administration flagged manufacturing troubles and paused production. Since then, some batches of vaccines have been cleared for use, some overseas because AstraZeneca hasn’t been given authorization for use in the United States.

The FDA asked AstraZeneca to move production elsewhere and had Johnson & Johnson take over manufacturing of its vaccine at the plant. The one-shot Johnson & Johnson vaccine is one of four vaccines now authorized here, but it’s used far less than the vaccines from Moderna and Pfizer/BioNTech. The Novavax vaccine was only recently authorized.

The Congressional subcommittee has been sorting out what went wrong at Emergent BioSolutions and issued two previous reports. The findings released Thursday found the total discarded doses is now 525 million due to contamination, expiration or other issues.

Emergent has said it’s been fully cooperating with inspectors and has disputed some of the findings, though officials have said they warned federal regulators about the difficulties of making two different vaccines at once.

On Thursday, Matt Hartwig, a spokesman, said in a statement that the company “remains committed to being a trusted partner of the U.S. and allied governments helping to supply medical countermeasures for biological, chemical and nerve agent attacks.”

He noted that Johnson & Johnson was in charge of manufacturing the vaccine at the plant from April 2021 until it stopped in early 2022.

“While unfortunate, a batch of drug substance may test out of specification for a variety of reasons whether during the manufacturing process or after the process is complete. Rigorous testing and reporting when such events occur is critical, and it is what happened in the case of the single batch of J&J drug substance found to be out of specification in March 2021,” he said. “To equate these quality control actions with a ‘discarded dose’ figure displays a lack of understanding regarding the biomanufacturing process.”

Emergent continues to produce other vaccines and therapeutics at other facilities for both the government and private vaccine makers.

One product gaining national attention is the smallpox vaccine ACAM2000 that Emergent has a long-term contract to supply to the Strategic National Stockpile. It’s now being deployed to counter the monkeypox outbreak, though due to significant side effects, it’s not being as widely used as another vaccine.

The Bayview plant, which produces bulk vaccines that are put in vials and packaged at other facilities, remains at the center of the COVID vaccine controversy. In addition to the congressional investigation, Emergent faces lawsuits by shareholders who say officials made false claims about their capabilities to inflate the stock price.

The company’s stock price had peaked at $134 in August 20202 but plunged after the news broke that the company needed to dump vaccine doses. It sank by about half as the lawsuit became known in April 2021 and has hovered in recent months around $30 a share.

Emergent officials previously said the lawsuits are without merit.

In the congressional committee’s latest release, officials said there was a batch from the 135 million Johnson & Johnson doses, made between August 2021 and February 2022, that failed inspection, rendering all the vaccine unusable. The vaccine had been sequestered at the time of the committee’s last report in May.

Johnson & Johnson said previously that it was cooperating with the investigators and Thursday said it no longer produces vaccine at Bayview.

“Johnson & Johnson has provided formal notice of termination of our agreement with Emergent due to Emergent’s continued breaches, including its failure to supply drug substance for our COVID-19 vaccine,” the company statement said. “The quality and safety of our COVID-19 vaccine are paramount. No vaccine doses containing Emergent drug substance produced after the restart of the Bayview facility in August 2021 have been released to any market.”

The committee found that Emergent officials said they had corrected deficiencies before resuming production in August 2021 but problems persisted. The European Union, South Africa and Canada also said Emergent’s processes did not meet quality standards.

The committee investigation, which began in April 2021, has relied on hearings with Emergent officials, site visits and documents from the company, vaccine makers and federal health agencies.

The latest release said Trump administration officials said during testimony that they were unaware of the extent of the company’s failures before awarding Emergent the vaccine contract, though earlier inspections already had warned of “substantial evidence” of non-compliance with good manufacturing processes and mold, poor disinfection of plant equipment and inadequate training of Bayview employees.

“Once again, our committees have found evidence that unacceptable and irresponsible business practices by Emergent BioSolutions have limited our ability to meet the urgent, global need for coronavirus vaccines,” said Rep. Carolyn B. Maloney, chairwoman of the Committee on Oversight and Reform.

“Companies benefitting from taxpayer dollars intended to produce vaccines must put the public good first,” the New York Democrat said in a statement. “By repeatedly failing to meet quality standards even after being notified of serious problems, Emergent BioSolutions has wasted hundreds of millions of vaccine doses and violated the public’s trust.”