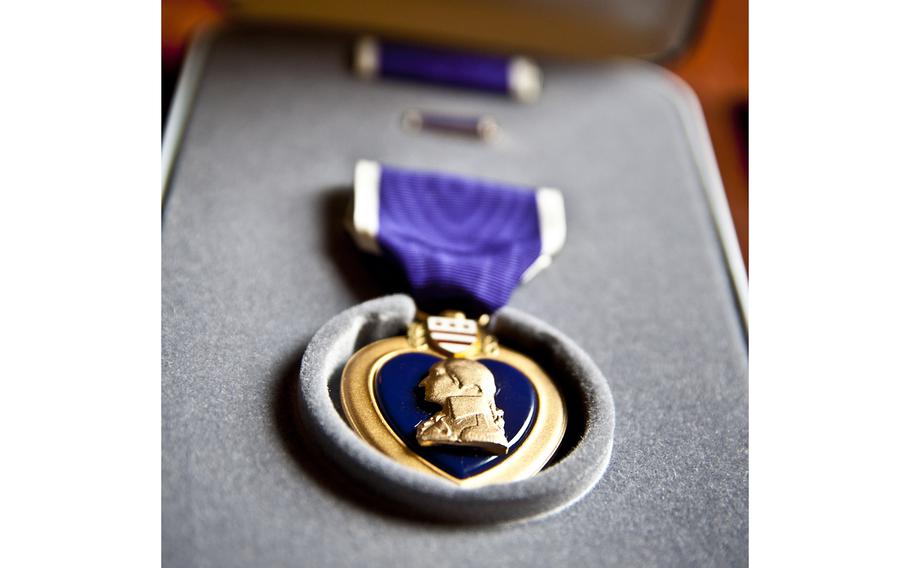 (Tribune News Service) — Alvin Lawrence Alce was surrounded by family when an Army general pinned a Purple Heart medal to his shirt this week.

The Vietnam War veteran had earned the honor more than a half century ago in Vietnam.

Alce, born and raised in Key West, Fla., was wounded at the Battle of Hamburger Hill, a 3,000-foot mountain nickname for the number of lives lost there during a several-day period in May 1969.

A year before, Alce had been drafted into the Army. He was 18.

“It’d been raining every day and it was close fighting,” said Alce, 72. “It was rough.”

The bullets were relentless. “Like bees chasing you,” he said.

Grenades would land near the U.S. soldiers, Alce said, and they’d pick them up and throw them back at the enemy troops.

“All you could do was keep pushing,” the veteran said of the battle, in a short interview Monday at the Harvey Government Center in Key West.

Alce spoke after a medal presentation ceremony complete with a color guard, bugle call and speeches.

“So proud of you,” Lopez told Alce with a handshake. “But I always have been.”

He was one of 372 Americans wounded at Hamburger Hill, where 72 others died.

As Alce greeted friends, elected officials, military veterans and other well-wishers Monday, he offered a few times to show his back and arm scars to people. He would lift the shirttail of his light blue guayabera just a bit to show where the gunfire struck.

Monroe County officials on Monday didn’t offer an explanation for why Alce had to wait 53 years for the Purple Heart.

In 2019, the county’s Veterans Affairs department, led by Director Cathy Crane and Deputy Director James Carey, discovered Alce lacked a Purple Heart, which they knew he had earned in Vietnam.

But the Purple Heart had never materialized for Alce, who was honorably discharged on Aug. 1, 1970, having served in the 3rd Battalion, 1st Infantry, Americal Division and the 101st Airborne Division.

The Army announced Alce would receive the Purple Heart in an order on March 20, 2020. But that date coincided with the start of the pandemic shutdown.

Alce finally got the medal on Monday.