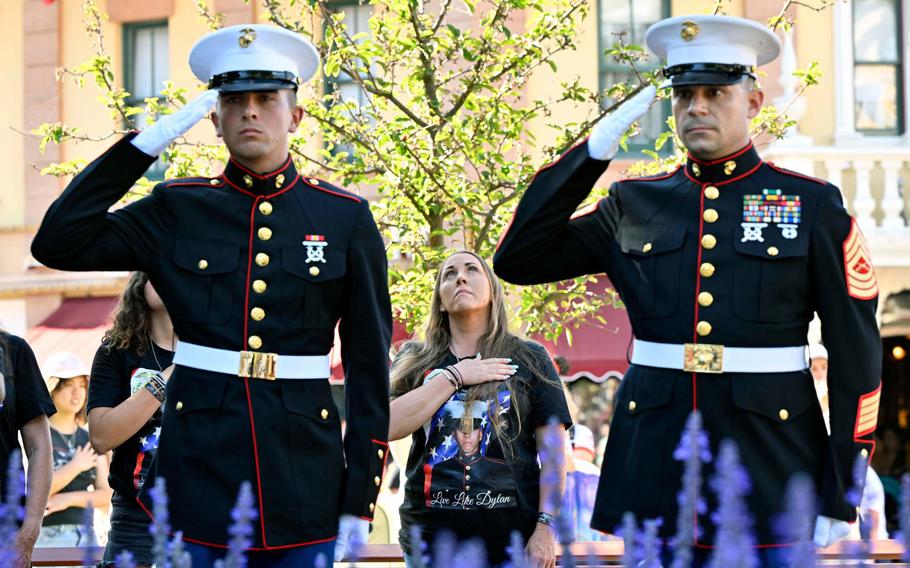 Cheryl Rex, center, stands as the flag is lowered with her son, Marine Private Branden Murrell, left, and Master Sergeant Patrick Hause, during the flag retreat at Disneyland in Anaheim, CA, on Monday, August 8, 2022. (Jeff Gritchen)

(Tribune News Service) — Space Mountain was Lance Cpl. Dylan Merola’s favorite ride. Disneyland was his happy place. So on Monday, Aug. 8, it was only fitting that a posthumous medal — commemorating the young Marine for his actions on Aug. 26 while standing guard at Kabul’s airport in Afghanistan — was presented to his family during Disneyland’s somber Flag Retreat Ceremony.

The notable lowering of the flag is held daily at the theme park’s Towne Square near the end of Main Street. But, a medal presentation there is a rarity, park officials said.

The ceremony included the playing of each service branch’s theme song  — “The Cassions Go Rolling Along,” “Anchors Away,” “The Marines’ Hymn,” “Semper Paratus,” and “The U.S. Air Force Song.” Veterans attending the event stepped forward to represent their respective branch. The Disneyland Band played while the Dapper Dans sang the lyrics.

After the U.S. flag was lowered, Marine Master Sgt. Patrick Hause — the Casualty Assistance Calls Officer (CACO) who assisted Merola’s family after his death — presented the Navy & Marine Corps Achievement Medal posthumously to Merola’s mother, Cheryl Rex, who attended with her children Branden Murrell, 24, and Olivia Hernandez, 14, along with her parents.

“Receiving Dylan’s award at Disneyland was very emotional,” said Rex. “It was also calming to know that this was Dylan’s place where we spent a lot of time for Dylan’s whole life.”

The medal with “C” for combat was presented to Merola for “heroic service above self” on the day that the Hamid Karzai International Airport was bombed during the evacuation of Americans and Afghan allies.

Merola, 20, of Rancho Cucamonga, was one of 11 Marines, a Navy sailor, and an Army soldier killed that day. Most Marines were part of the 2nd Battalion, 1st Marines at Camp Pendleton.

Two other Southern California Marines — Cpl. Hunter Lopez, 22, and Lance Cpl. Karem Nikoui — have also posthumously been awarded similar awards. All those killed received the Purple Heart Award, and in November, Congress approved for all 13 to receive Congressional Gold Medals, one of the highest civilian awards. The attack, which also killed 170 Afghans and wounded another 45 U.S. troops, was the deadliest against U.S. forces in Afghanistan since Aug. 6, 2011.

The idea to host the award ceremony at Disneyland came from Hause’s wife, Monica, a veteran of the Army and U.S. Air Force. She became close with Rex and her children because of her husband’s connection to the family: Patrick Hause was the knock on the door notifying Rex that her son had been killed.

The initial plan was to hold the presentation with Merola’s unit at Camp Pendleton, but scheduling conflicts made that impossible. Monica Hause connected with officials at Disneyland. Rex and her children had been longtime pass holders at the theme park, said Susi Brown, a spokeswoman for the park, so putting the event together was extra special.

“We felt a strong connection to them,” Brown said. “This is something very out of the ordinary.”

Monica Hause worked with Brown and on Monday was happy with the results. She and her husband spent the day with Rex and her children and enjoyed rides, food, and a special behind-the-scenes tour of Walt Disney’s apartment located just above the fire station at the theme park.

The SALUTE team, a Disneyland cast with military backgrounds, presented Rex with a cased flag that had once flown over Disneyland. And the family enjoyed front row seats for Monday’s Main Street Electrical Parade and fireworks.

“I’m happy for them,” Monica Hause said. “It was a day of spending time with good friends and supporting them.” For Rex, the event was emotional. As a single mother, Disneyland was her family’s “home away from home.”

“We had season passes here since my kids were small,” she said. “It was ours and Dylan’s happy place.”

Getting the tribute during the Flag Retreat Ceremony was incredibly meaningful, Rex said. The family attended the Veterans’ Day ceremony there while visiting the theme park. And they stopped by for a commemoration even if it wasn’t a holiday.

“I taught my kids to respect and honor the flag here,” she said.

That patriotism wore off not only on Merola but on Rex’s oldest son, Branden. On Aug. 5, he graduated from boot camp at Marine Corps Recruit Depot San Diego and is now a private in the Marines.

Murrell reports back to Camp Pendleton on Aug. 16 where he will train to become either an air traffic controller or work with unmanned vehicles.

“I’m really proud of my brother for getting this award,” he said. “He always inspired me to do what I want to do. As the oldest brother, I stayed back, but when Dylan (died) I didn’t see myself doing anything else but becoming a Marine. I always saw how military service members were respected, and I wanted to do something that people looked up to, too.”

At the ceremony, Murrell witnessed the respect his brother received as hundreds of park visitors took time out of their day to watch the flag come down. Among the crowd, dozens of veterans participated as their service branch was recognized.

Among them was Leroy Homer, 63, a Navy veteran from Lompoc who was visiting Disneyland with his wife. The flag ceremony is a “must-do” whenever they visit the theme park.

“When you sign the contract, we’re putting our lives on the line for our country,” Homer said. “We understand that’s part of our job, and someone has to defend our way of life.”

Attending Merola’s ceremony made his visit to Disneyland all the more special.

I’m here to honor a brother-in-arms,” he said. “We have to support each other.”