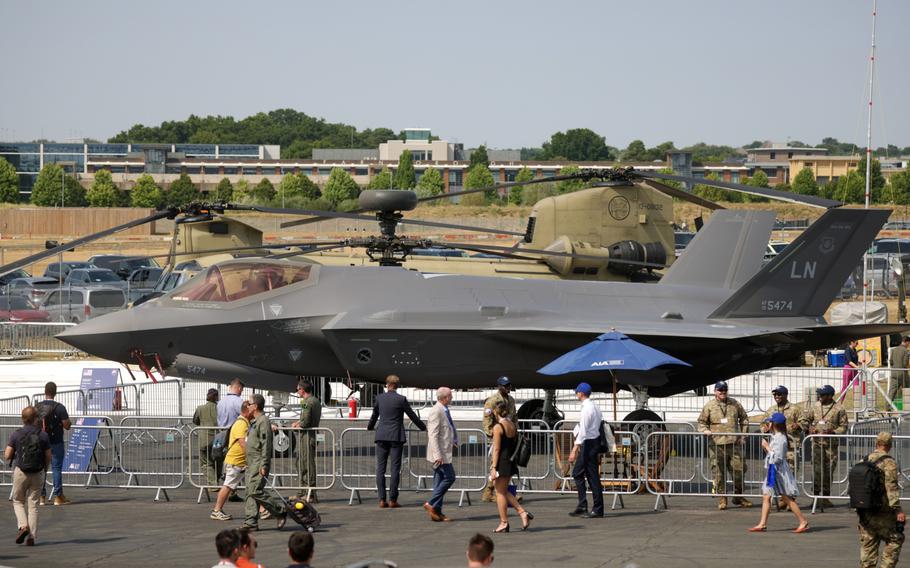 A U.S. Air Force F-35A fighter jet on the opening day of the Farnborough International Airshow in Farnborough, UK, on July 18, 2022. (Jason Alden/Bloomberg)

Lockheed Martin Corp. has delivered more than 800 F-35 fighter jets, but production is still marred by excessive defects and rework that risk substantial delivery delays and reduced readiness, according to the Pentagon’s Defense Contract Management Agency.

Lockheed, the Defense Department’s top contractor, has improved in many regards from the F-35’s first production lot through the current 14th batch, but “too many quality assurance defects” aren’t found at the initial assembly station only to be discovered either before or after formal acceptance of the warplanes, the agency said in a statement.

These are “an issue to the user community and a major concern negatively impacting the fleet,” the agency added, referring to deployed units and pilots. Despite some improvement, “substantial Lockheed Martin behind-schedule performance risk remains” until the need to scrap, rework or repair parts is “significantly reduced,” it said.

F-35 subcontractors Northrop Grumman and BAE Systems also “have had many manufacturing non-compliances,” the contracting agency said in its comments on the costliest U.S. weapons system.

The lingering aircraft production issues come on top of shortages of engine modules, inadequate depot facilities and cost increases for the hardware processor needed for a key software upgrade. Pending also are possible costly retrofits if major problems are discovered during an often-delayed simulation exercise scheduled for next year to test the aircraft virtually against the most advanced Russian and Chinese threats.

International orders for the F-35 continue to rise, with Finland, Switzerland, Germany and Greece the latest overseas customers. South Korea has indicated it wants more of the jets. The more than 800 F-35s delivered worldwide are out of a potential fleet of more than 3,300 for the U.S. and partner nations.

The Defense Contract Management Agency said some of the persistent quality issues are being discovered after formal acceptance of aircraft. It said it is working with the Pentagon’s Joint Program Office “to identify where these quality issues originate in the production cycle and are making the necessary changes in oversight to mitigate these issues.”

The Pentagon’s F-35 program office said it couldn’t comment on specific defects that affect “fleet readiness for operational security reasons” but said it “continually attacks any quality issues at the plant to avoid issues in the fielded fleet.”

The defense contract agency said Lockheed’s facility in Fort Worth, Texas, has substantially improved its parts supply chain management and greatly improved a key reliability metric over the past four to five years: the mean flying hours between failures caused by flawed components. On-time delivery has also improved, as have overall assembly times.

Lockheed said in a statement that it “works closely with our customers and is committed to delivering quality products on time.” Specifically, the company said, the need to scrap, rework or repair parts “has continuously improved lot-over-lot since the F-35 program began, and we reduced it by 7.6% in 2021 from 2020.”

“During and post-Covid, we hired and trained more than 500 new production line employees on manufacturing and quality processes, we are actively working continued improvements and presented these plans” to the Pentagon’s F-35 office and the contracts management agency in April, the Bethesda, Maryland-based company said. “Quality escapes” — defects not caught before final delivery -- for this year are 0.28 per jet, “a 45% improvement from 2021,” the company said.