Secret Service's own secrets come under scrutiny in Jan. 6 probe 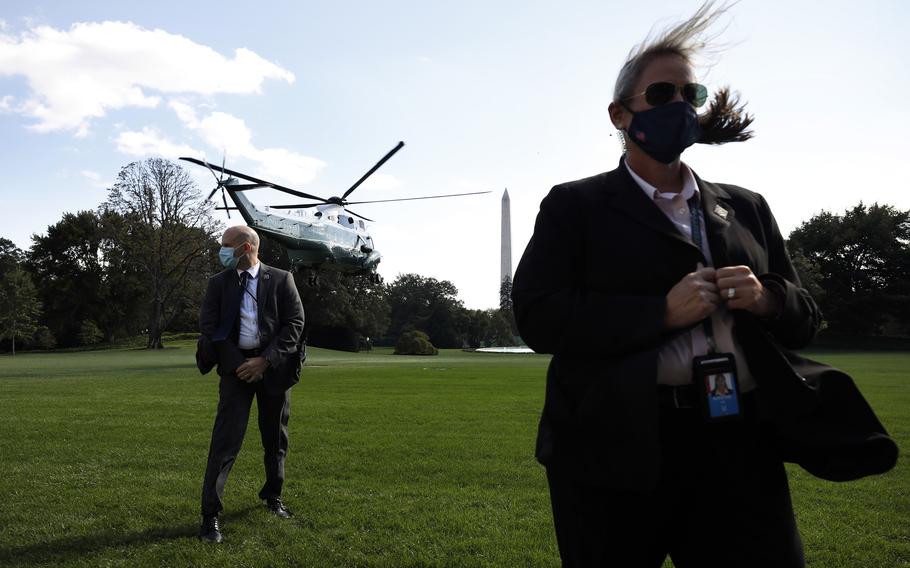 U.S. Secret Service agents stand guard as the Marine One helicopter, with former President Donald Trump on board, departs from the White House in Washington, D.C. for a campaign event in Duluth, Minnesota, on Sept. 30, 2020. (Yuri Gripas/Abaca Press/TNS)

WASHINGTON (Tribune News Service) — The name expresses it all — the Secret Service is supposed to operate in the shadows as an apolitical agency protecting U.S. officials and their families. Like oxygen, it should be vital but largely invisible.

So when it emerged that Secret Service text messages tied to last year's lethal attack on the U.S. Capitol had been deleted, and that Vice President Mike Pence disagreed with the agents on the scene, grievous questions of integrity and politicization loomed. Had the agency been hijacked by Donald Trump?

"This feeds the perception that they've taken a side in the political war," said Paul Rosenzweig, who helped oversee the service during the George W. Bush administration.

The service acknowledges that some texts of 24 of its employees from Jan. 5 and 6, 2021 were erased despite federal laws requiring they be kept, but says it was an accident that occurred during a shift to new mobile phones. That, despite at least two prior demands from Congress that it preserve material related to the attack.

The matter has spawned a slew of investigations — first by the Secret Service itself — until the inspector general of the Department of Homeland Security, which oversees the agency, took control of the probe. The National Archives and Records Administration wants a report within 30 days. A congressional committee may convene hearings. On Friday, Senate Judiciary Committee Chairman Dick Durbin asked the Justice Department to investigate.

Meanwhile, the episode has renewed accusations that the Secret Service allowed itself to be co-opted by Trump. The inspector general leading Homeland Security's probe, Joseph Cuffari, is a Trump appointee who waited months before telling the House committee that some of the messages it wanted were missing.

Cuffari has himself been the subject of an unrelated inquiry over his management, and several lawmakers have asked that he be replaced on the probe. Cuffari didn't alert Congress for months about the missing Secret Service texts.

"Inspector General Cuffari's actions in this matter, which follow other troubling reports about his conduct as Inspector General, cast serious doubt on his independence," Rep. Carolyn Maloney, D-N.Y., chairwoman of the House Oversight and Reform Committee, and Rep. Bennie Thompson, D-Miss., chair of the Homeland Security committee and the one investigating the Jan. 6 riot, wrote in a letter released Tuesday.

Furthering the concerns: the head of the Secret Service, James Murray, is also a Trump appointee. And Tony Ornato, a veteran agent at the center of an alleged incident involving Trump in his vehicle on Jan. 6, had been promoted by the president to a top political role at the White House.

"Of course, it is very suspicious — they are from the 5th and 6th — Wow! What a coincidence," Joseph Petro, a 23-year agency veteran and former senior executive who co-wrote a book on the Secret Service, said about the missing texts. With regard to the agents' closeness to Trump, he added, "In some ways, they've brought it upon themselves."

Anthony Guglielmi, spokesman for the Secret Service, said in a statement on Wednesday that agents protect presidents "regardless of political affiliation or sentiment" with "integrity and honor."

The agency, he said, "will continue to cooperate fully with the January 6th committee who carry the duty to investigate the unspeakable events of that day."

The Secret Service is celebrated in American culture for heroics, real and imagined. Agent Jerry Parr pushed Ronald Reagan into the presidential limousine during an assassination attempt in 1981, likely saving his life. Clint Eastwood's fictional agent Frank Horrigan jumped in front of an assassin's bullet in the 1993 Hollywood thriller "In the Line of Fire."

In fact, though, this isn't the first time that questions have been raised about the agency. It has a track record of protecting presidential privacy, most infamously regarding John F. Kennedy's sexual affairs.

Some may argue that it was a different era. Nonetheless, recent stumbles more closely resemble the Keystone Cops. In 2011, the Secret Service didn't realize shots were fired at the White House until maintenance staff later noticed bullet damage, including a cracked ballistic window on then-President Barack Obama's second-floor residence. In 2014, a knife-wielding man jumped the fence and made his way into the executive mansion through an unlocked front door. In 2017, another fence jumper eluded capture for 17 minutes, pressing his face against White House windows and jiggling a door handle while Trump watched television in the residence upstairs.

Other embarrassments include two senior agents crashing into a White House barricade during an active bomb investigation in 2015, after they were drinking at a party. In 2012, agents hired prostitutes during a presidential trip to a Summit of the Americas gathering in Cartagena, Colombia.

The text deletions surfaced after riveting testimony to the House Jan. 6 panel from former Trump White House aide Cassidy Hutchinson. Under oath, she said Ornato told her on the day of the insurrection that Trump exploded at Secret Service agents who refused to take him from a rally to the Capitol to join protesters and that he lunged for the steering wheel of his armored vehicle.

People close to Ornato have anonymously disputed the account but not under oath. Nor has he answered questions on it publicly.

Aides to Pence also told the panel that the vice president refused Secret Service requests to get in his armored vehicle during the attack, fearing he'd be spirited away. That raised questions about whether removing him might have figured in plans to interfere with the certification of Joe Biden's victory.

As the committee sought agency texts, Cuffari notified the panel that messages from 24 employees on Jan. 5 and 6 had been erased.

Cuffari has been criticized for delaying the release of survey results showing widespread sexual harassment among Homeland Security personnel and waiting at least nine months to raise the alarm on the lost texts, according to the Project on Government Oversight.

The texts episode spotlighted the unusual role of Ornato, who moved from leading Trump's Secret Service detail to White House deputy chief of staff. He later returned to the Secret Service as an assistant director in charge of training.

"It sets a terrible example of political influence for other Secret Service members," Eisen said. "I would never allow that."