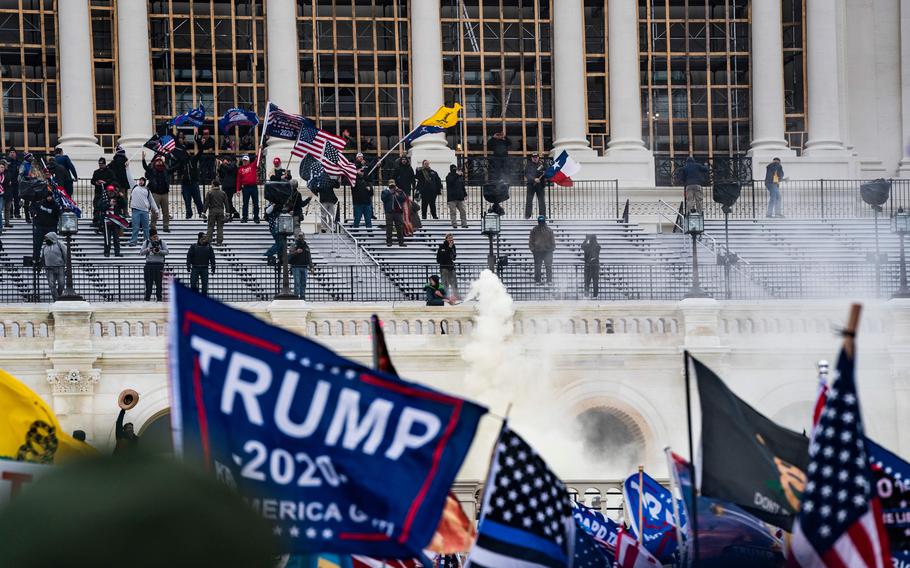 Protesters clash with police during a riot at the U.S. Capitol on Jan. 6, 2021, in Washington, DC. (Alex Edelman/AFP/Getty Images/TNS)

Text messages from the two top officials in the Department of Homeland Security around the Jan. 6 attack on the Capitol were reportedly inexplicably deleted and may not be able to be recovered.

Messages sent by Homeland Security Secretary Chad Wolf and deputy secretary Ken Cuccinelli were scrubbed in a so-called "phone reset" that went ahead in the weeks after the attack despite the obvious need to preserve records related to the attack, Washington Post reported Friday.

The inspector general who oversees the department knew about the missing cases as early as February 2021 but failed to inform Congress or take any steps to recover the missing messages.

The new revelation is the latest disclosure about missing evidence surrounding the Jan. 6, 2021, effort to prevent the peaceful transfer of power from one president to another.

It comes after the Secret Service, which is part of Homeland Security, says it somehow allowed text messages from agents involved in responding to the Jan. 6 attack to be deleted.

The congressional panel investigating Jan. 6 wants to know why all the texts were allowed to be deleted in apparent blatant violation of rules requiring preservation of federal records and specific requests to keep all records related to Jan. 6.

Wolf and Cuccinelli are both staunch Trump loyalists, although Wolf resigned in the days after Jan. 6 and issued a lukewarm criticism of his ex-boss.

The Secret Service has already been locked in a damaging standoff with both Cuffari and the Jan. 6 committee over the actions of agents, including those in direct contact with former President Donald Trump and Vice President Mike Pence.

Despite being crucial witnesses to the infamous attack and the response of top leaders, the agents were allowed to decide for themselves whether to save or delete messages, the agency said.

The agents protecting Trump came under a harsh spotlight when bombshell witness Cassidy Hutchinson testified to the panel that she was told the former president physically accosted one in an effort to force them to drive him to the Capitol to lead the violent attack.

The Secret Service claimed the agents would be willing to counter those claims, but they have since chickened out of testifying and hired private attorneys, casting serious doubt on their assertions.

Pence refused to get into a Secret Service vehicle inside the Capitol out of fear they would whisk him away without his permission.