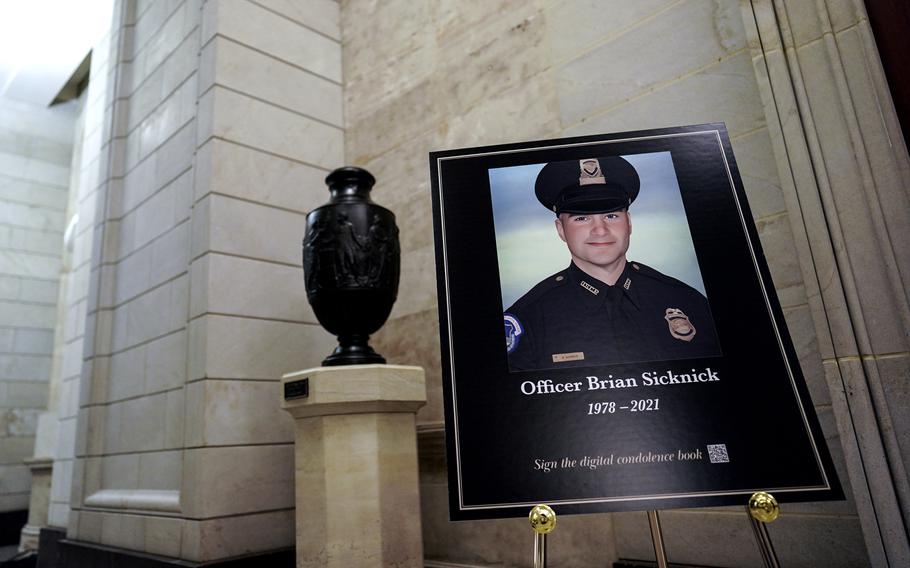 WASHINGTON — One of two men charged in the Jan. 6, 2021, chemical-spray assault on three police officers at the U.S. Capitol, including Brian D. Sicknick, is set to plead guilty to reduced charges Wednesday, court filings show.

A plea hearing for Tanios was set Wednesday for 2 p.m. in federal court in Washington. A plea is not final until it is accepted by a judge, and Tanios can change his mind at anytime until then.

The case of Tanios and his co-defendant Julian Elie Khater is among the more high-profile Jan. 6 prosecutions, as both men were accused of assaulting Capitol police officer Sicknick, 42. Sicknick was injured while attempting to hold back a violent crowd on the west terrace of the Capitol, collapsing hours later and dying the next day of natural causes, officials said. Neither Tanios or Khater is alleged to have caused Sicknick’s death.

It could not immediately be determined whether Tanios would be pleading guilty in a cooperation deal with prosecutors. In April, defense attorneys for both co-defendants said they were working toward plea deals with the government in successfully asking U.S. District Judge Thomas F. Hogan to postpone a July trial to allow more time for talks.

Attorneys for Tanios, of Morgantown, West Virginia, and for Khater, of State College, Pennsylvania, did not immediately comment.

“We typically do not comment beyond public filings and statements to the Court and have no comment,” said Bill Miller, spokesman for the U.S. attorney’s office for Washington, which is overseeing the prosecution of Capitol riot cases.

Khater and Tanios, who ran smoothie and sandwich shops in their respective college towns, were arrested in March 2021 and pleaded not guilty to the assaults on Sicknick, a fellow Capitol Police officer and a D.C. officer.

Khater has been jailed since then, but an appeals court in August ordered Tanios to be released, saying that he had “no past felony convictions, no ties to any extremist organizations, and no post-January 6 criminal behavior that would otherwise show him to pose a danger to the community.”

Hogan had earlier ordered both men held pending trial, saying government videos of the assaults on the three officers showed a degree of premeditation and future dangerousness.

“These two gentlemen are law-abiding, respected individuals in the community, and it makes it very difficult for the court to make this conclusion, but they still committed this attack on uniformed police officers. I don’t find a way around that,” Hogan said at the time.

Prosecutors in detention hearings alleged that Khater sprayed a canister Tanios had purchased and carried to the Capitol in his backpack, deploying it at close range against Sicknick, U.S. Capitol Police officer Caroline Edwards, and a D.C. police officer identified as B. Chapman from the police line, incapacitating them.

“Give me that bear sh--,” Khater allegedly told Tanios on video recorded nine minutes earlier, at 2:14 p.m. at the Lower West Terrace of the Capitol, where Sicknick and other officers were standing guard behind metal bicycle racks, according to charging papers.

Tanios attorney Elizabeth Gross has argued that he was 30 feet away from Khater when he sprayed the officers and did not aid or abet any crime.