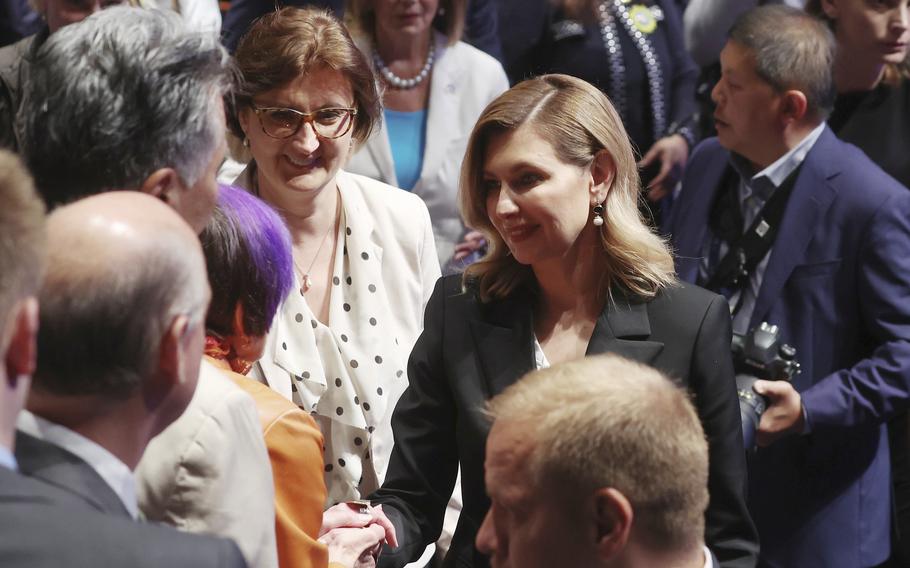 WASHINGTON — Ukraine’s first lady Olena Zelenska appealed to Congress on Wednesday for air defense systems, pleading for more weapons for her country to fend off Russia’s deadly attacks on civilians.

Zelenska made the request from the same auditorium in the U.S. Capitol where her husband Ukrainian President Volodymyr Zelenskyy appeared virtually in March. She stood in front of a rotating photo display of the war’s many casualties and asked Congress not to think of her as a first lady, but as a daughter and mother.

“Will my son be able to return to his school in the fall? I don’t know, like millions of mothers in Ukraine. Will my daughter be able to go to university at the beginning of the year and experience more student life? I cannot answer,” Zelenska said, speaking in Ukrainian. “We would have answers if we had air defense systems. … Help us to stop this terror against Ukrainians.”

Russia has launched more than 3,000 cruise missiles into Ukraine since invading in February, Zelenska said. But all it takes to destroy someone’s family is shrapnel, she said.

Zelenska highlighted several of the lives upended by Russian aggression. She showed images and a video of Liza Dmitrieva, a “cheerful, playful, little rascal” killed this month in a Russian strike on the city of Vinnytsia. Zelenska said she met the 4-year-old girl, who had Down syndrome, during the filming last year of a Christmas video.

The last photo of Liza showed the girl’s dead body lying next to her toppled stroller. In the next photo, a 5-year-old girl in southern Ukraine lay buried in rubble. Others were pictured, before the war killed or maimed.

Zelenska spoke of the 20 Ukrainians who died in a shopping mall, the journalist who died in a missile attack and of Andriy, a 3-year-old boy who survived a Russian bombing and is now learning to use a prosthetic in Germany.

“How many children like him are there in Ukraine? How many families like this may still be destroyed by the war?” she said. “These are Russia’s ‘Hunger Games,’ hunting for peaceful people in peaceful cities of Ukraine. They will never broadcast this on their news, that’s why I’m showing it to you here.”

The first lady also spoke of a 96-year-old man who survived four Nazi concentration camps and died from Russian shelling and the family of policeman Oleh Fedko, whose father, mother, wife, 6-year-old daughter and 1-month-old son were shot while trying to evacuate in a car. Fedko told Zelenska that the adults died right away but the children cried for an hour and a half before succumbing to their wounds, she said.

“The war is not over, the terror continues, and I appeal to all of you, on behalf of those who were killed, on behalf of those people who lost their arms and legs, on behalf of those who are still alive and well and those who want to come back from the front,” Zelenska said, noting she was the first wife of a foreign leader to address Congress. “I’m asking you something now I would never want to ask: I am asking for weapons. Weapons that would not be used to wage a war on somebody else’s land, but to protect one's home.”

“We must continue supporting our Ukrainian allies and work together to hold [Russian President] Vladimir Putin accountable,” she tweeted.

Sen. Chris Coons, D-Del., praised Zelenska’s “strength and courage” and said it should move “all of us in Congress to keep our focus on helping the Ukrainian people fend off Russia’s brutality.”

Rep. Bill Pascrell, D-N.J., watched Zelenska speak with a Ukrainian flag draped around his shoulders, later tweeting out emojis of the American and Ukrainian flags side by side.

Zelenska’s visit to Capitol Hill coincided with the announcement Wednesday that the U.S. will give Ukraine four more High Mobility Artillery Rocket Systems to help beat back Russian forces attempting to swallow up the eastern Donbas region. The U.S. also pledged this month that it will send Ukraine the National Advanced Surface-to-Air Missile System, which guards airspace over the White House and the Pentagon.

Zelenska thanked lawmakers for the continued support and said the U.S. stands united with Ukraine in the fight for human life and independence.