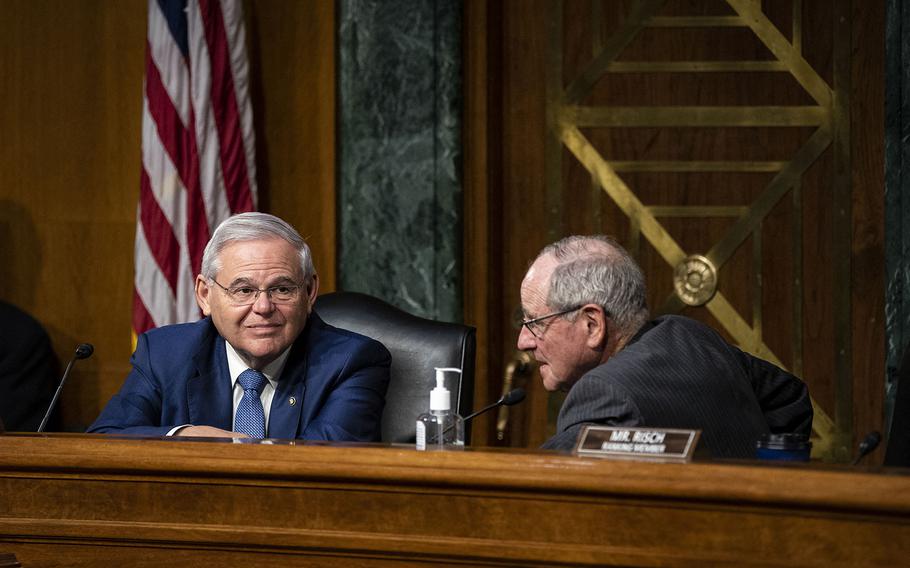 WASHINGTON (Tribune News Service) — Lawmakers in both parties are signaling that Turkey President Recep Tayyip Erdogan should not expect them to sweeten the pot as he seeks concessions in return for dropping his objections to Sweden and Finland joining NATO.

Erdogan’s objections to the Nordic countries joining the Western military alliance have injected some high-stakes drama in the lead-up to this week’s NATO summit in Madrid, which President Joe Biden will attend. Erdogan’s grievance is ostensibly over the two wealthy democracies’ ties to a Kurdish group that Turkey contends is linked to terrorists.

Decisions to expand NATO require the unanimous signoff of all 30 member states, so Ankara’s decision to withhold its approval has the potential to drag out the accession process for some months — though it is widely expected Turkey will eventually relent and lift its objection. Meantime, Sweden and Finland are in a bit of a perilous gray area security-wise. They have given up their long-standing neutrality in order to join NATO while not yet receiving the critical benefit that comes with official treaty membership: Article 5 guarantees that member countries will defend each other.

“I don’t know what Turkey’s trying to extract from them, but at the end of the day that’s what this is about. And maybe if we get in the game, they’ll want to extract from us, too, which I will be vehemently opposed to,” Senate Foreign Relations Chairman Bob Menendez, D-N.J., said at a June 22 committee hearing on NATO enlargement. “We don’t need for any extraction to take place or any concessions to take place to have two great democracies join NATO.”

The longer Ankara withholds its consent, the more uncomfortable the Swedes and Finns may become with their security position in Europe vis-a-vis Russia.

Moscow has been surprisingly muted over their collective decision to pursue NATO membership — perhaps in order to save face by not acknowledging how much its February invasion of Ukraine has backfired against its own strategic interests, spurring the Western alliance to become more united and, soon, more militarily capable. Swedish and Finish membership also would give NATO much greater proximity to Russian territory. Still, that doesn’t mean Sweden and Finland are safe from Russian threats or surprise actions.

There are likely multiple reasons for Erdogan’s objections to Sweden and Finland joining NATO.

One is the illiberal longtime Turkish leader’s genuine opposition to the close working relationship the U.S. military has developed with the YPG, a Syrian Kurdish militia, in the fight against the Islamic State terrorist group. Another is a desire to see the lifting of certain European and U.S. sanctions on Turkey’s ability to purchase their weapons. And a third is likely a wish to project an image of a tough and strong leader on the international stage amid a tanking domestic economy with an inflation rate of 74%, which has greatly complicated Erdogan’s reelection hopes.

At any rate, Erdogan has a long history inside NATO of playing hardball, particularly when it comes to other member states’ dealings with the Kurds. This has caused a certain amount of jaundice around Capitol Hill when lawmakers are asked for their thoughts on the latest Turkey-NATO dustup.

“Turkey’s such a complicated situation, right? They obviously have their own agenda. They have not been playing well with the team in NATO. But they do have the ability to stop Finland and Sweden from joining,” House Foreign Affairs Committee member Adam Kinzinger, R-Ill., told CQ Roll Call. “I don’t envy the administration in those conversations and trying to figure out how to get there. But I really wish Turkey would play ball.”

While Ankara has not been able to persuade Washington to sever support for the Syrian Kurds, it has demanded that Sweden and Finland extradite alleged members of a Turkish Kurdish militant group, the PKK, which the United States and European Union have deemed a terrorist organization. Though Erdogan does not distinguish between the YPG and the PKK, which has carried out multiple attacks over the years inside Turkey, the United States does so.

Likewise, Ankara has pushed for the severing of ties and the extradition from Sweden and Finland of members of the Fethullah Gulen movement, which Erdogan believes was behind a failed 2016 military coup against him. Ankara also wants the two Nordic countries to lift the arms embargoes they imposed on Turkey as punishment for its 2019 military incursion into Syria to attack Kurdish positions.

“Let’s recognize, I think, that the positions that Sweden and Finland have taken are pretty much on the same page with the position that the United States has taken with respect to the [Syrian Kurds] and the very important fight against ISIS and terrorism,” said Sen. Chris Van Hollen, D-Md., at the Foreign Relations Committee hearing. He also noted that Ankara has pushed for the United States to extradite Gulen, who has lived for decades in Pennsylvania. Washington has declined, due to a lack of evidence the Turkish cleric was tied to the coup plot.

“President Erdogan also wants to extradite Gulen. We’re a country that recognizes rule of law. So are Sweden and Finland,” Van Hollen said, noting that Sweden already has responded to some of Turkey’s concerns by lifting its arms embargo.

Testifying before the committee, Assistant Secretary of State for European Affairs Karen Donfried said Finland and Sweden have “been engaging very constructively in these talks [with Turkey], and they have been forward-leaning in terms of being responsive to the concerns raised.”

Ankara is also unhappy over the continuance of congressionally mandated sanctions on its ability to acquire the U.S.-made F-35 fighter jet. Turkey was expelled from the multination Joint Strike Fighter program in 2019 by the Trump administration as a consequence of its decision to purchase a Russian-made missile defense system. That purchase was made in contravention of U.S. sanctions on Russia’s weapons industry and in spite of alliance concerns about the purchase offering an intelligence backdoor for Moscow to learn about the F-35’s stealth capabilities.

And though the Biden administration has reportedly given its backing to Turkey’s request to modernize its aging F-16 fleet, Congress has yet to be formally notified of the proposed export of 40 new fighters and upgrade kits for 80 existing jets, which Ankara has said it wants.

Key lawmakers, such as Menendez, who have the power to stymie any proposed major weapons sale, have warned Turkey against trying to hold Sweden and Finland’s alliance accession hostage over getting the F-16 sale approved.

And the ranking Republican on the Foreign Relations Committee, Sen. Jim Risch of Idaho, has also indicated that he has concerns about Turkey trying to use U.S. lawmakers’ overwhelming desire for Sweden and Finland to join NATO as leverage to override their other concerns about any F-16 sale.

Congressional concerns over the reported F-16 deal are related to Ankara’s treatment of the Syrian Kurds, past flirtations with closer relations with Moscow and Turkey’s long-standing dispute with fellow NATO member Greece over maritime boundaries and Cyprus.

“All of these things are interrelated, obviously. When I make a decision on that, I’m always cognizant of how good of an ally is Turkey,” Risch said in an interview about NATO enlargement and Turkey’s desire for the F-16. “So, this is a matter that is fluid right now, and we’re going to continue to monitor it.”

Turkey’s issues with Sweden and Finland are best resolved in talks between the three countries, Risch said, adding that he does not want the United States “being involved at this point.”

“I consider Sweden and Finland in the future will be members of NATO if they satisfy Turkey’s security interests. It’s not improper to expect from Sweden and Finland to satisfy them. So, I’m optimistic about the future,” said Burhanettin Duran, the general coordinator of the SETA Foundation, a Turkish think tank with close financial ties to Erdogan allies.

Duran, who was speaking from Ankara on June 21 as part of a SETA webinar on NATO enlargement, repeatedly emphasized that the Madrid NATO summit should not be viewed as the cutoff point for Ankara lifting its objections to Sweden and Finland joining the alliance.

“This should not be realized within a week,” he said. “The Madrid summit is not the deadline. We have time. We are not short of time.”

Niels Lesniewski contributed to this report.