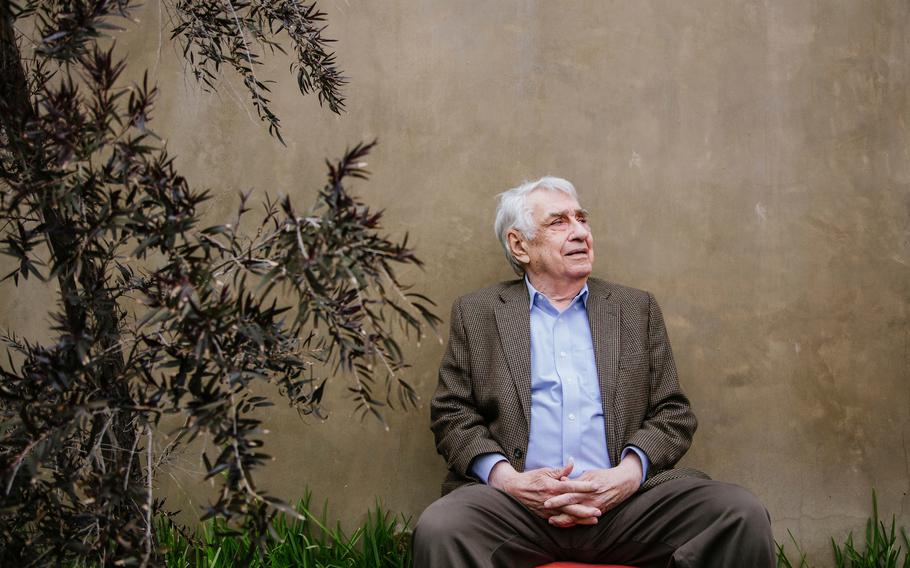 Philip Baker Hall at his home in Glendale, Calif. in 2017. (Brinson+Banks/The Washington Post)

Philip Baker Hall, a jowly actor whose air of ruefulness and scowling impatience elevated even the briefest of appearances into masterful portrayals of gravity and silliness, best captured best in an unforgettable role on "Seinfeld" as a hardcore library cop, died June 12 at his home in Glendale, Calif. He was 90.

His daughter Anna Ruth Hall said the cause was complications from emphysema. In some of his later screen work, he used a portable oxygen tank.

With his raspy delivery, grizzled hair and doleful face, Hall excelled as government and military officials with urgent agendas as well as Hollywood and business executives with ulterior motives. He played enough judges to form a bar association, but the hint of menace in his voice also made him effective as old-school hoods and others on the fringes of society.

When choosing roles, he once told the A.V. Club, he was drawn to "really off-center parts that are so ludicrous that you almost can't believe them. It's always fun to take those kinds of parts and play them with as much serious passion as you can muster."

One of his most indelible characters was the aptly named library investigations officer Lieutenant Bookman on the sitcom "Seinfeld."

Larry David, who created the show with comedian Jerry Seinfeld, once told The Washington Post that Hall never played his scenes for laughs, which only intensified the bonkers absurdity of punchlines such as, "I've got a flash for you, joy boy!"

David recalled that Hall was so effective playing the library cop inspired by "Dragnet," a Detective Joe Friday of the stacks, that "Jerry had problems getting through the scene."

Although his television and film appearances were often too fleeting to merit mention in reviews, Hall became one of the most reliable and welcome character actors of his era. Film scholar David Thomson described him as having a "wonderfully sour presence." Thomson added, "He looks like a guy on the subway, at the end of the diner counter, a face that knows its place is in the crowd and several rows back." Yet that veneer of anonymity propelled one of the busiest late-blooming careers in show business.

Hall, who came from a blue-collar Ohio family, did not start acting professionally until he was 30 but made up for lost time with hundreds of roles, from the works of Shakespeare to those of Arthur Miller and Philip Barry, with regional theaters across the country.

He came to greater prominence in 1983 as the star of the off-Broadway drama "Secret Honor," a one-man show focused on the brooding post-presidential life of Richard M. Nixon. It was mostly a Faustian story with a political spin, Hall told the Boston Globe, "really about anybody who comes to a crisis, anybody whose ambitions have been high and who has had to compromise to reach those ambitions."

Hall copied neither Nixon's voice nor his mannerisms but, by all accounts, he succeeded in portraying a wounded soul. New York Times cultural critic Mel Gussow wrote that Hall "seems to capture a full measure of the man - his edginess, suspicion, resentment and unconscious humor - as he wills himself into failure."

Robert Altman directed a screen version of the play in 1984, and film critic Roger Ebert praised Hall for giving "one of the great performances in American movies." But it tanked commercially, relegating Hall to another decade of minor parts on both side of the law, among them, a mob boss fixer in "Midnight Run" (1988) and an IRS agent in "Say Anything" (1989).

In the early 1990s, he was working on a television production when Paul Thomas Anderson, then a gofer on the set, offered Hall the lead role of a gambler in a short film he was planning. The project, "Cigarettes & Coffee" (1993), featuring an interconnected series of stories set in a diner, became a hit at the Sundance Film Festival and launched Anderson's feature career.

For years, Hall remained part of Anderson's unofficial stock company of actors, and the writer-director gave him some of his most memorable dramatic opportunities: a rare leading role as a mysterious professional gambler with a guilty past and a deep sense of honor in "Hard Eight" (1996), a commercially-minded theater magnate who foresees the future of videotape in the pornographic film industry in "Boogie Nights" (1997), and a quiz show presenter who faces his mortality in "Magnolia" (1999).

Hall's trio of high-profile roles for Anderson, along with his "Seinfeld" appearance, were his windfall. He began appearing in so many movies and television shows in any given year, with a dozen credits in 1998 alone, that he sometimes forgot in interviews which characters he played and what the projects were called.

He was the harried police captain in "Rush Hour" (1998) and its action-comedy sequels and the embattled "60 Minutes" producer Don Hewitt in the tobacco whistleblowing drama "The Insider" (1999). He was as much at home in Lars von Trier's scathing minimalist avant-garde drama "Dogville" (2003) as he was in his prolific supporting parts in major studio releases of the 1990s, 2000s and 2010s, among them "The Rock," "Air Force One," "The Contender," "The Truman Show," "The Talented Mr. Ripley," "The Sum of All Fears" and "Argo."

In a testament to his omnipresence, Hall appeared as a handwriting expert in director David Fincher's acclaimed "Zodiac" (2007) and as a police department chief in the lower-profile film "The Zodiac" (2005), both about the hunt for a San Francisco serial killer.

Philip Baker Hall was born in Toledo on Sept. 10, 1931. His father, a factory laborer, had difficulty finding work during the Great Depression, and the family scraped by in what Hall later called "the slums of the north end" of the city.

At a young age, Hall developed an interest in entertainment and began performing magic shows at lodge meetings and banquet functions, aided by a resonant baritone that came into full pitch by the time he was 12.

He was active in his high school drama club and majored in speech and drama at the University of Toledo, where he worked as a ditchdigger to pay for his education. After graduating in 1953 and completing Army service, he supported himself and a growing family as a high school teacher in Ohio before tiring of the "hypocrisy and bureaucracy" of academic life.

He uprooted his wife and children to New York and was quickly exposed to the vagaries of professional show business. He toured South America with a cultural exchange program sponsored by the Kennedy administration, performing small parts opposite Helen Hayes. He also did a stint in Boston with an offshoot of the Second City improv group, amid a hectic schedule of roadshow productions and off-Broadway work.

Hall periodically returned to the stage, notably in a 2000 London and off-Broadway revival of David Mamet's "American Buffalo" opposite William Macy. But he mostly stayed close to Hollywood, remaining in seemingly constant demand for guest appearances on shows such as "3rd Rock From the Sun," "Boston Legal," "Modern Family," "The Loop," "Messiah" and "Curb Your Enthusiasm," reuniting in the last with Larry David as his crotchety doctor.

By Hall's telling, he was bemused to find that his years of compelling dramatic work onstage, as Prospero or Willy Loman, had been almost entirely overshadowed by a few minutes as a flinty library detective.

"It was kind of incredible," he added. "I'm not putting it down. It's just that when people say, 'I loved you as Bookman,' I can't help but think, 'But what about the other 280 roles I've done?' I don't say it, though. Because with Bookman, I kind of hit the jackpot."