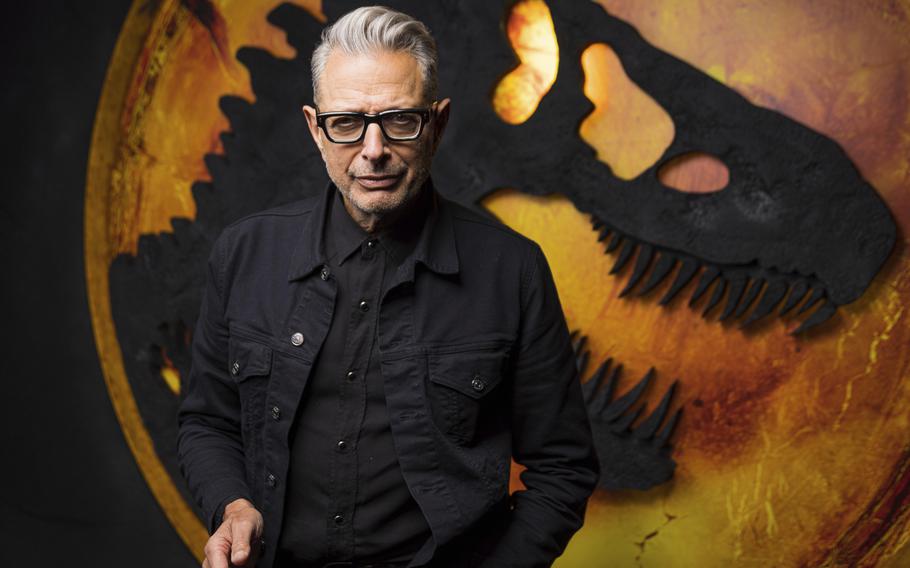 Jeff Goldblum poses for a portrait to promote the film “Jurassic World Dominion” at the Universal Studios Lot in Los Angeles on on Tuesday, May 10, 2022. (Willy Sanjuan/AP)

There is only one person who, in the middle of a massive dystopic dinosaur movie, can utter a line like “That’s bananas” with just the right timing and inflection.

For almost three decades, off and on, Jeff Goldblum has played Dr. Ian Malcolm with particular Goldblumian panache. As the stylish chaos theorist of the “Jurassic Park” and “Jurassic World” films, Goldblum is the voice of reason and comedy relief in one, an augur of nature’s unpredictability who can’t help marveling at seeing his theories in action, even if that poses immediate danger to himself.

It’s one of the 69-year-old actor’s best-known characters. Yet in even big movies like “Jurassic Park” and “Independence Day,” Goldblum has such a singular manner and much-imitated tempo that he's never been particularly defined by those roles. It's more that Goldblum, in putting his own idiosyncratic spin on them, marks the characters, rather than the other way around. Life finds a way in “Jurassic Park," and so does Goldblum.

In Colin Trevorrow’s “Jurassic World Dominion, ” which opens in theaters Thursday, Goldblum — along with original cast members Laura Dern and Sam Neill — returns to close out the franchise’s second trilogy of films in a sprawling adventure set in a near future where dinosaurs have spread across the world, as has ecological imbalance and a plague of giant locusts.

For Goldblum, the son of a doctor and host of the Disney+ series “The World According to Jeff Goldblum,” the subjects and themes of the movie dovetail with some of his own curiosities and interests in how we might, he says, “upgrade our stewardship of the planet.” What does Goldblum, the movies’ resident chaotician, think of our increasingly tumultuous times?

“I don’t know anything about what I’m talking about. But let’s utter the word ‘entropy’ and ‘systems’ and how things break down,” Goldblum says, speaking from London. “Before the butterfly comes out of the chrysalis, the caterpillar has some convulsions, chaotic convulsions. But it’s not death, necessarily. It’s the onset of transformation.”

Satisfied that he’s perhaps arrived at a kernel of truth, Goldblum concludes, “Hey, what about that?”

Chaos and harmony feature prominently in most conversations with Goldblum, an ever-riffing, cosmically attuned raconteur. He tends to speak as if narrating his brain's inner-workings in real time, arriving now and then at ideas worth pausing to savor and existential epiphanies that delight him.

One question, for example, about whether his sons’ names — River Joe and Charlie Ocean — suggest some ecological bent sends Goldblum on a jag about ocean environmental health, fundraising for Oceana, the song “Moon River” (which Goldblum, an accomplished pianist, says his band might soon record), Carly Simon’s “Let the River Run,” the movie “Working Girl,” Mark Harris’ Mike Nichols biography and a white-water rafting trip on the Kern River.

“Water is life, isn’t it?” says Goldblum. “If they ever wanted to drop the Goldblum and just go with River Joe, that sounds evocative to me, that sounds like a good character. Or Charlie Ocean. I like both of those. Nothing wrong with Goldblum, but if they want to change it, fine with me.”

Either through experience (Goldblum’s early films included two with the improvisational Robert Altman, “a dipsy doodle of an artist,” he says) or practice (Goldblum credits acting teacher Sandy Meisner with instilling in him “a continuity of digging”), Goldblum has arrived at his unique cadence and perpetual state of curiosity.

“At the beginning of the day, I remind myself: free association, stream of consciousness, perceptual readiness and then openness,” says Goldblum. “This whole business of acting and music seems to be, if nothing else, an invitation toward opening up. Opening yourself up in both directions. Not only to what’s around you in reception but then in your giving back, reacting and offering something.”

After co-starring in “Jurassic Park” and its 1997 sequel, “The Lost World,” Goldblum returned to Ian Malcolm in 2018's “Jurassic World: Fallen Kingdom" during which his character testifies to the U.S. Congress. Malcolm recommends letting the exploding volcano determine the fate of the dinosaurs on Isla Nublar. Goldblum relished it.

“I was full of juice,” he says. “I was in this froth of fun, which I sometimes get in.”

Trevorrow, who has co-written the trilogy and directed the first and third installments, first worked with Goldblum on a “Jurassic World” Super Bowl ad for Jeep. Goldblum wasn't what he expected.

“You think that he’s purely improvisational and maybe even a loose canon,” says Trevorrow. “But on this movie, I'd just see him walking out on the garden at the hotel we were staying in going over his lines again and again and coming in and delivering a very precise, considered performance.”

Production on “Jurassic World Dominion" was halted in 2020 due to the pandemic. When shooting restarted, the studio rented out a hotel in England near Pinewood Studios for cast and crew. Goldblum would sometimes play the piano there with his castmates and Trevorrow — “musicales and hootenanny's of one kind or another,” Goldblum says. Dern posted one video of her, Neill and Goldblum singing the Beatles' “Blackbird.”

“He’s a beautiful man,” says Trevorrow. “We would have really thoughtful conversations about his perspective on where we’re at. There was a depth to it all, honestly, when it comes to the experience of making the film and going through pandemic together.”

For the “Jurassic World Dominion” cast and filmmakers, making a movie about nature's resistance to humankind's meddling during the pandemic took on real-world resonance. As in the movie, the world might be ending but Goldblum is still there keeping the spirits up.

"What else can we do?" says Goldblum. “Being a Sandy Meisner devotee, I’m a romantic about the ensemble credo and synergy and, like this movie depicts, what educated, smart and deeply caring people can do — even a few of them — together at a crucial moment. They can even sometimes defeat the forces of ignorance, corruption and greed, and keep the homo sapiens ball moving along a little more. Maybe.”