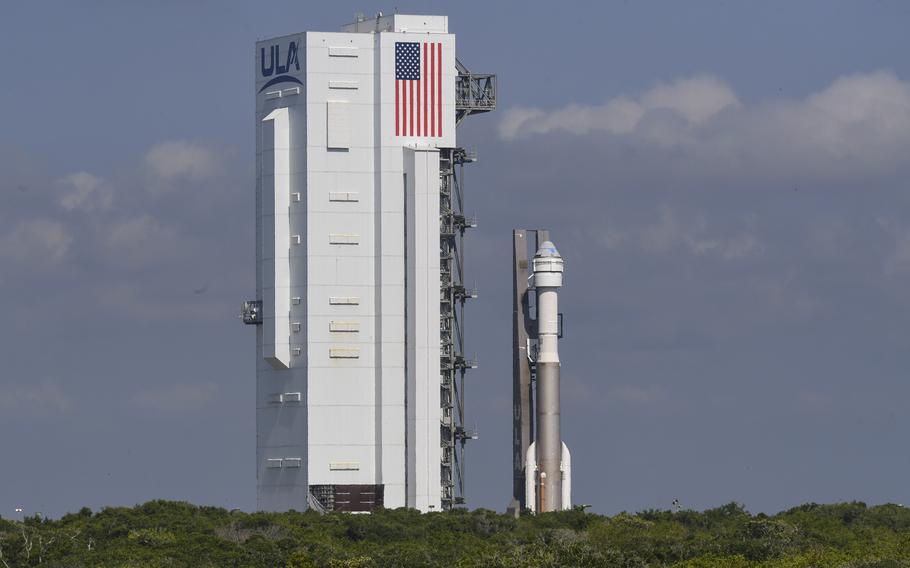 The Boeing CST-100 Starliner spacecraft rolls out of the Vertical Integration Facility to the Space Launch Complex-41 on May 18, 2022. (Jonathan Newton/The Washington Post)

It has been a brutal few years for Boeing. There were the deadly 737 Max crashes, the ensuing scandal, the firing of its CEO and the coronavirus pandemic, which dried up supply lines and drastically cut demand for air travel.

Last month, in its most recent quarterly earnings report, Boeing posted a $1.2 billion loss as it suffered delays with commercial aviation and various Pentagon programs. It also said it has taken losses on building the next Air Force One.

Now, Boeing faces another major test — a repeat attempt to fly its Starliner spacecraft to the International Space Station. For a company trying to crawl out of crisis, it simply has to go well.

Boeing has already tried and failed — twice — to fly the capsule to the station in a test flight without any astronauts on board. The first try came in December 2019 in a flight marred by faulty software. The second try was last summer, when 13 valves remained stuck in the closed position. In all, the botched attempts have cost Boeing nearly $600 million.

The newest effort is scheduled for Thursday at 6:54 p.m. Eastern time from Cape Canaveral, Fla. The test, however, is now about much more than carrying astronauts to space: Can Boeing get back to something resembling its once-lofty status at the pinnacle of aerospace or will it continue to be a symbol of mismanagement and distrust?

“They’re not performing,” said Ronald Epstein, an analyst at Bank of America. “And it gets back to an issue that I think has been highlighted about Boeing in other areas of the company — that they’ve lost their way in engineering for some reason.”

If the flight goes well — from launch on the United Launch Alliance’s Atlas V rocket, to a successful autonomous docking with the station about 24 hours later and then a successful return to Earth — it will be followed by a flight with a pair of NASA astronauts on board.

The company’s woes with Starliner have been compounded by the fact that its rival, SpaceX, is flying its Dragon spacecraft to the space station for NASA routinely. After completing a test without astronauts in 2019, it has flown five crewed missions for NASA, as well as two private astronaut missions.

SpaceX has raced ahead, despite being awarded a much smaller fee under what’s called the commercial crew program: $2.6 billion vs. the $4.2 billion NASA awarded Boeing to develop Starliner.

Boeing first attempted its test flight without a crew in December 2019. But shortly after the launch, ground controllers sensed something was terribly wrong and later realized that the onboard computer was 11 hours off, making it think it was in an entirely different portion of the mission. While in space, Starliner struggled to communicate with the ground. And by the time controllers could figure out what was going wrong, it had burned too much fuel, which prevented it from docking with the station, one of its primary objectives. Instead, it came home after just two days.

The flawed flight touched off an independent investigation that called for dozens of corrective actions and identified nearly 50 gaps in Boeing’s testing procedures. In a statement at the time, NASA said, “there were numerous instances where the Boeing software quality processes either should have or could have uncovered the defects.” It added that those problems could have had serious consequences and “led to risk of spacecraft loss.”

The problems also forced NASA to rethink its relationship with Boeing, which for decades had been one of its most trusted partners but now, the agency decided, required more rigorous oversight. “NASA oversight was insufficient — that’s obvious,” Doug Loverro, then NASA’s head of human exploration, said at the time. “And we recognize that.”

By last July, some 18 months after the first attempt, Boeing was ready to try again. The software had been fixed and tested. And executives said they were confident that their second attempt would be successful. “It is of paramount importance that we have a successful flight,” John Vollmer, then a Boeing vice president who oversaw the program, said at the time.

It didn’t. Starliner didn’t even get off the ground.

Hours before launch, engineers discovered 13 valves in the service module that would not open. For days engineers struggled to figure out why the valves wouldn’t open, finally deciding to roll the spacecraft back into the factory to investigate.

Eventually, it concluded that its propellant had seeped through a valve and interacted with moisture in the air, creating nitric acid that corroded the valves and forced them to remain shut.

Since then, Boeing has said it has been able to fix the problem and has done additional testing on a new service module, the part of the craft that housed the valves. That has “built more confidence that it’s ready for operation, and it’s got the highest probability of successful launch,” Mark Nappi, a Boeing vice president who is now the third person to oversee the Starliner program, recently told reporters. He said the company has “high confidence that that vehicle is ready for launch as well.”

Speaking to reporters Wednesday, NASA astronaut Barry “Butch” WiImore, who could be one of the first to fly in Starliner, said: “We wouldn’t be here right now if we weren’t confident that this would be a successful mission. But as you mentioned, there are always unknown unknowns. That’s what historically has always gotten us. It’s those things that we don’t know about, and we don’t expect.”

Still, he added, “We’re ready. The spacecraft is ready. These teams are ready.”

Last week, NASA and Boeing completed a “flight readiness review” and decided that all systems were operating normally and that they should proceed with the launch. Such reviews, however, are not a guarantee of success. Similar reviews preceded the two earlier tests.

“There was really nothing that was a big item that we’re tracking as we move forward toward launch,” Steve Stich, NASA’s commercial crew manager, told reporters. “So it was a very clean review compared to many that I’ve participated in.”

Still, Boeing is “under significant pressure,” said Ken Herbert, a managing director at RBC Capital Markets. “We’re at the point where you need to be wondering what’s going on. But I think if they have a successful uncrewed launch this week, that will go a long way toward addressing concerns around Starliner, at least.”

If it is successful, Boeing hopes to follow up with Starliner’s first crewed flight with a pair of astronauts later this year or early next year.

If, however, it suffers another failure, some think Boeing might just give up on the program - even though the company has said repeatedly it would stick it through.

“If this thing becomes an expensive distraction, I could see them want to just cut their losses,” Epstein said. “I don’t think that’s an unreasonable point of view.”

NASA wouldn’t want that, however. The whole point of picking two companies for the program was to have a backup in case one falters.