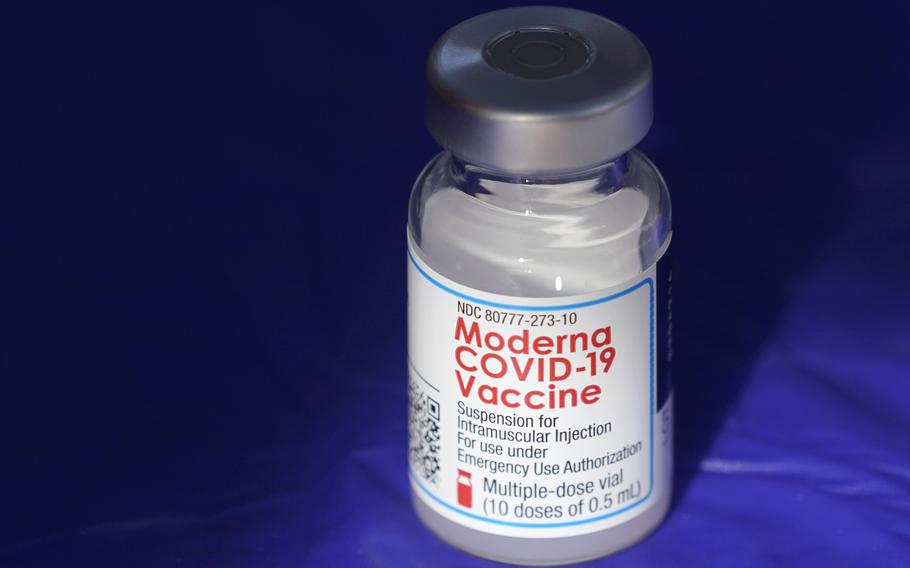 A vial of the Moderna COVID-19 vaccine rests on a table at a drive-up mass vaccination site in Puyallup, Wash., south of Seattle. (Ted S. Warren/AP)

WASHINGTON — The White House told federal agencies Thursday to hold off on reinstating a coronavirus vaccination mandate for millions of employees, hours after an appeals court rejected an earlier injunction that had blocked the executive order.

In a message to agency officials, the White House cautioned that “there are still procedural steps that need to take place to lift the injunction; at this time the district court’s preliminary injunction remains in effect.”

It’s not clear when the agencies might begin enforcing the mandate, which makes unvaccinated federal employees subject to discipline up to and including firing — unless they qualify for an exemption on medical or religious grounds or have such a request under consideration.

The most recent accounting from the administration, from early December, showed that about 93% of employees had been vaccinated and an additional 4% had either approved or pending requests for exemptions.

The White House’s message came after a ruling by a divided panel of the U.S. Court of Appeals for the 5th Circuit to restore President Joe Biden’s executive order. The court majority held that the Civil Service Reform Act, the general body of laws governing the 2.1 million executive branch workers, requires that any challenge to the order must go through the government’s internal appeals channels, and not directly into the courts.

Under that law, the Merit Systems Protection Board - which acts much like an internal court system for federal employees - “can order reinstatement and backpay to any nonexempt plaintiffs who are disciplined for refusing to receive a COVID-19 vaccine.” Employees also could ask a separate agency, the Office of Special Counsel, to bring a case before the merit board by arguing that the order violates civil service protections, it added.

“The court’s decision is good news,” an Office of Management and Budget spokesperson said Friday. “Based on the prior implementation of the requirement for largest and most occupationally diverse workforce in the country, we know vaccination requirements save lives, protect our workforce, and strengthen our ability to serve the American people.”

The earlier injunction, which came in a lawsuit filed by a group called Feds for Medical Freedom, had barred agencies from taking disciplinary actions against vaccine holdouts and from continuing to process requests for exemptions.

The injunction was applied nationwide, although it did not apply to mandates that individual agencies put in place for their own employees ahead of Biden’s executive order last September - including one for medical personnel in the Department of Veterans Affairs.

The lower court’s late-January ruling came just as agencies were preparing to take disciplinary actions against employees not in compliance.

In February a different panel of the appeals court, also in a divided opinion, had refused the administration’s request to lift the injunction on an emergency basis.

Dissenting from Thursday’s ruling, Circuit Judge Rhesa Hawkins Barksdale wrote that employee appeal rights under the Civil Service Reform Act, or CSRA, apply only after an agency has taken a disciplinary action, and noted, “Here, there is no agency action. Rather, the President is attempting to impose a sweeping mandate against the federal civilian workforce . . . the President seeks to require an entire class of employees to be vaccinated or be subject to an adverse action.