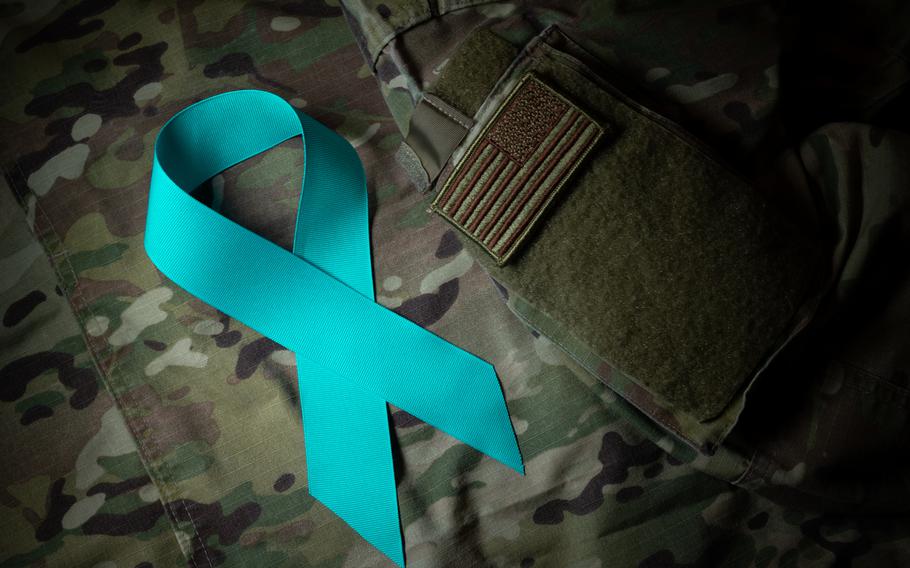 The teal ribbon is a national symbol of support for victims of sexual assault, and is used by the Defense Department’s Sexual Harassment/Assault Response and Prevention programs. A Government Accountability Office review found that the armed services failed to fully implement more than 10% of legally imposed requirements to address sexual assault, including some that date to more than 15 years ago. (Don Hudson/U.S. Air Force)

The military failed to keep up with the mushrooming number of measures that Congress has required the armed services to implement to address sexual assault, a government watchdog revealed.

As of October 2021, the Defense Department had not fully implemented 18% of the nearly 200 unique requirements imposed in legislation since 2004, the Government Accountability Office found in a report published this week.

The Homeland Security Department had not fully implemented six of 36, or about 16% of those affecting the Coast Guard, the report said.

The departments’ lack of full implementation of dozens of requirements could have stymied efforts to combat what Defense Secretary Lloyd Austin has called “persistent and corrosive problems” of sexual assault and harassment.

Both DOD and Homeland Security concurred with the report’s 23 recommendations, which largely call on the agencies to fully implement the unmet parts of the requirements that are still active.

In separate responses, the departments said they are addressing several of the requirements.

Many of the unmet requirements involve oversight, evaluation and reporting on military efforts to prevent sexual assault, investigate crimes and protect or advocate for victims.

DOD has long faced criticism for its handling of sexual assault and harassment issues, including from the public, service members and lawmakers.

Late last year, Austin approved a series of actions recommended by an independent review commission, ordering the military departments to implement the plan swiftly and deliberately.

But the latest GAO audit, ordered by Congress two years ago, looked at earlier measures intended to combat the problem. Those measures were enacted in annual defense authorization bills from 2004 to 2019.

In all, some 249 measures were passed into law, of which 181 remained in effect at the end of the 15-year period.

The greatest share of these affected the Pentagon or the military branches. While DOD satisfied most of them, “several issues limit oversight” of prevention and response programs, the GAO found.

Noncompliance with all the requirements could have left DOD, Congress and the public without the data needed to ensure adherence to efforts to support victims and prevent sexual assault, or to direct resources where they were most needed, the report suggested.

For example, investigators found that from 2005 to 2021, DOD often omitted information about retaliation complaints and investigations of those complaints.

The Army and the Air Force failed to implement measures related to annual organizational climate surveys imposed in 2014. And the Army did not ensure that commanders complied with the requirement to conduct them, auditors reported.

The following year, Congress required that the appraisals of commanding officers’ performance consider elements of command climates concerning sexual assault issues. But the GAO found that the Marine Corps and the Air Force both failed to implement those measures.

Some of the issues the GAO found date back nearly 20 years to requirements that have since expired without being fulfilled. Others involve repeated failures to satisfy Congress’ specifications.

The independent review commission that Austin established found that training was “outdated and out-of-touch,” a deficiency that might have come to light sooner had assessments been reported annually, as Congress required several years earlier, the GAO said.