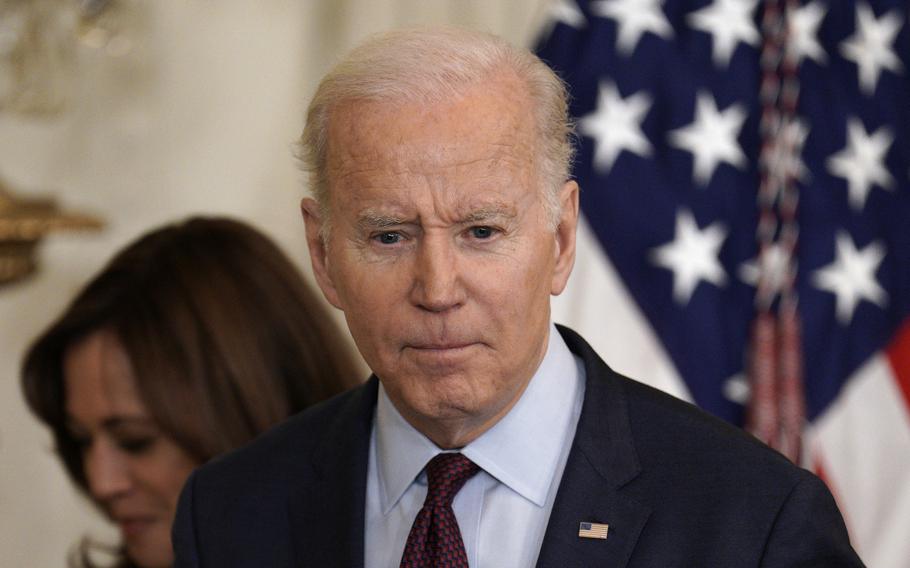 WASHINGTON (Tribune News Service) — President Joe Biden’s new defense budget request is more sizable than many observers had expected, and Congress is all but certain to beef it up further.

But with inflation eroding the power of each dollar more by the day, how much Biden’s huge proposed budget would actually buy in 12 or 16 months is very much up in the air.

The fiscal 2023 defense budget was written before the Russian invasion of Ukraine in February, and Pentagon officials said Monday they did not change the budget because of the war.

Inflation, however, had an outsize impact on that internal administration debate, they acknowledged, because the military’s expenses, like everyone else’s, have been rising fast.

It is not known whether the Ukraine war and inflation will still be raging during the time the fiscal 2023 bill would presumably be in effect, if it were enacted on time — that is, from Oct. 1, 2022 through Sept. 30, 2023.

Regardless, both the Russian threat and inflation — and the Ukraine war’s upward pressure on inflation — are feeding a bipartisan riptide that will pull the Biden administration toward a national security budget in fiscal 2023 that is higher even than his $813.4 billion request, $773 billion of which is for the Defense Department.

Those two issues will be central, first off, to the implementation of the fiscal 2022 budget for the next six months, whether or not they will still be actually relevant, as opposed to politically salient, in fiscal 2023. That is because there is no debate that the war and the cost of living — and fighting — are raging as we speak in fiscal 2022.

Congress helped the Pentagon deal with inflation in fiscal 2022 by allocating in the omnibus bill fully 6 percent more than in the previous fiscal year, and that bill provided the Pentagon $6.5 billion to deal with the war in Ukraine’s costs, as well as billions more to meet other emergencies. But if inflation has not subsided significantly in a year’s time, the Pentagon may actually find its budget has effectively been cut — unless, or until, Congress intervenes.

Republicans are already marshaling their forces to do so.

“The Pentagon’s inflation assumptions for 2023 are almost certainly low, nor does the budget make up for current record inflation rates,” Sen. James M. Inhofe of Oklahoma, the top Republican on the Armed Services Committee, said in a statement.

Inhofe, citing Congress’ boosting of the fiscal 2022 defense dollars, said there is “broad bipartisan appetite for a higher defense budget.”

Sen. Roger Wicker of Mississippi, the Republican who is expected to replace the retiring Inhofe in the committee’s top GOP seat next year — maybe as chairman, if Republicans take the Senate this fall — agreed with Inhofe on what’s likely ahead.

“This moment demands decisiveness and strength through a sustained increase in defense spending,” Wicker said in a statement. “We will ensure that America meets that moment, even if the Commander-in-Chief has other priorities.”

“At a time when we are already spending more on the military than the next 11 countries combined, no we do not need a massive increase in the defense budget,” Sen. Bernie Sanders, an independent from Vermont, said in a statement.

But Congress has gone along with Inhofe and Wicker, not Sanders, before — and is likely to again.

Mike Maugeri, an analyst with Wolfe Research LLC, an equity research firm, said in an interview that Congress has added to the defense budget request each year for more than two decades — with an average annual increase, including supplementals, of 2.6 percent.

Biden is requesting more growth for the Pentagon in the coming fiscal year than he did in his fiscal 2022 budget.

In fiscal 2022, Biden sought a 1.6 percent nominal increase in national defense spending over fiscal 2021. Congress upped it to a 6 percent raise, but even that generous payment is being fast eroded by inflation.

The question now is: How long will high inflation last?

For fiscal 2023, the Pentagon’s share of Biden’s national security budget request is $773 billion. That compares to $756.6 billion in fiscal 2022, a figure that included $14.3 billion for Ukraine, Afghanistan refugees, natural disasters and dealing with a massive leak of military fuel into drinking supplies in Hawaii.

If Biden’s request were enacted as is, that would be a 2.2 percent increase in nominal terms from this fiscal year to next, before considering inflation.

But inflation is now higher than 7 percent. If inflation were to continue at that level or even close in fiscal 2023, then Biden’s request will amount to “effectively a cut in funding,” said Todd Harrison, a defense budget expert with the Center for Strategic and International Studies, in an email.

Of course, inflation may cool off in six months when fiscal 2023 starts, or in 12 months, when fiscal 2023 will be halfway over, or after that, Pentagon Comptroller Mike McCord told reporters Monday.

Even so, when administration officials put the final touches on the budget in recent months, inflation was very much a factor, McCord and other officials said Monday.

McCord and Deputy Defense Secretary Kathleen Hicks noted the proposed 4.6 percent pay raise for troops and civilians — which would be the biggest in 20 years, they said — is patterned after the rising private sector wage rates.

They also said inflation drove them to put more money into defraying troops’ housing costs, child care expenses and a new “basic needs allowance” for lower-income military personnel. The Pentagon is also under administration orders to pay a $15 minimum wage to department civilians, and a similar mandate applies to defense contractors.

People in the military are “the center of our universe,” said Adm. Christopher Grady, vice chairman of the Joint Chiefs of Staff, at the Pentagon press briefing. “In that regard, then, how we take a look at inflation and the pressures that it puts on our service members are front and center to everything we do.”

Mackenzie Eaglen, a defense budget expert with the conservative American Enterprise Institute, said the rising prices, especially in the labor market, forced Pentagon leaders to either boost defense spending more than the White House may have intended or reduce the scope of key programs.

“They didn’t want to take it out of hide,” she said.

Despite inflation’s eroding effect on Pentagon buying power, the fiscal 2023 defense budget is sizable — historic, even, in its dimensions.

In addition to the unusually large pay raise for military personnel, Biden has proposed $276 billion for research and procurement programs — the most ever, officials said. In particular, the proposed research budget increase, 9.5 percent over last year, is extremely likely to keep ahead of inflation.

“It looks like the big drivers of this budget were higher labor costs, higher inflation, and some selective investments in modernization,” Harrison said in an email.

“It’s higher than I was expecting,” said Mark Cancian, a former Office of Management and Budget official, referring to the overall defense budget number.

Cuts in the fiscal 2023 defense budget are few and far between. The F-35 fighter jet program is slated to buy 61 planes, about one-third fewer than previously planned. Numerous assets — from Littoral Combat Ships to A-10 Warthog attack planes — will be retired. Army active-duty end strength will drop by 3,000 soldiers, compared to the projected fiscal 2022 level (and 9,000 fewer than the authorized level).

Still, William Hartung, a research fellow at the Quincy Institute for Responsible Statecraft, a left-leaning think tank, said Biden’s defense spending blueprint is “substantially more — adjusted for inflation — than spending at the height of the Korean or Vietnam wars, and over $100 billion more than peak spending during the Cold War.”

It will be months before Americans know the size of the next defense budget. Barring a reversal of recent trends, the final spending bill will clear after the midterm elections this fall — and maybe not until next year.

Before then, Congress is likely to add money, if only to deal with fallout from the Ukraine conflict, even if it ends soon, Cancian said.

McCord, for his part, allowed for the possibility of asking Congress to reprogram money within its fiscal 2022 allocation to meet emerging needs, whether driven by Ukraine, rising prices or some other unforeseen event.

Senate Minority Leader Mitch McConnell has already begun to prepare the congressional battlefield for the next fiscal skirmish.

“The world is dangerous and getting smaller,” he said in a floor speech last week.