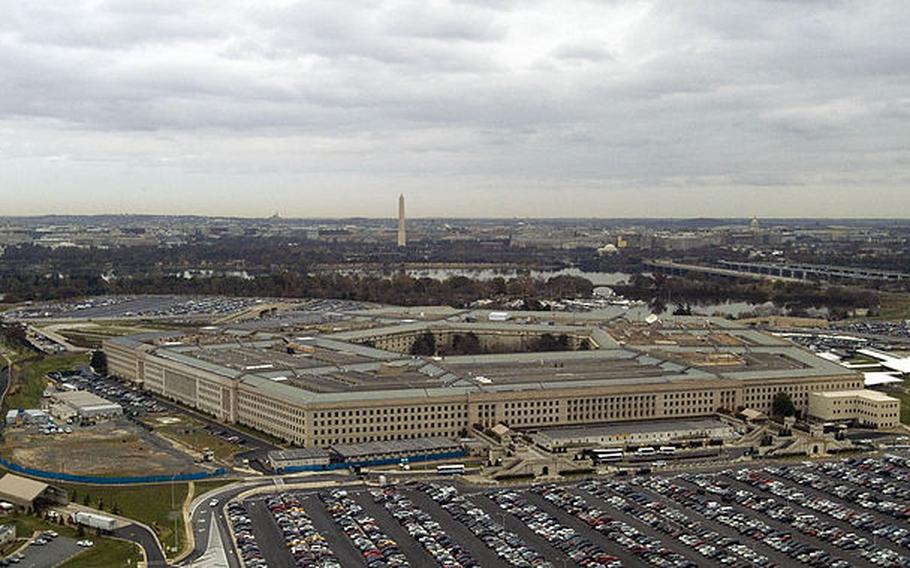 An aerial view of the headquarters of the United States Department of Defense located between the Potomac River and Arlington National Cemetery. President Joe Biden’s defense spending proposal met an onslaught of criticism from congressional Republicans upon its release Monday for failing, they say, to adequately address escalating inflation and the West’s standoff with Russia over Ukraine. (Wikimedia)

WASHINGTON — President Joe Biden’s defense spending proposal met an onslaught of criticism from congressional Republicans upon its release Monday for failing, they say, to adequately address escalating inflation and the West’s standoff with Russia over Ukraine — growing crises that, officials acknowledged, did not factor into the Pentagon’s request to Congress.

The administration is seeking a budget of $773 billion for the Defense Department in fiscal 2023, which begins in October — an increase of more than $30 billion from what Congress approved for the current fiscal year. The request envisions spending increases for the development of next-generation weapons, including hypersonic missiles, and modernizing the nuclear triad.

Such “foundational” changes, Pentagon Comptroller Michael McCord told reporters, are vital considering China remains the “long-term, big-picture” threat to the United States. McCord said that the proposal was finalized before Russian President Vladimir Putin’s invasion of Ukraine in late February and that “it was too late to change it even if we had wanted” to reflect the growing anxieties the United States and its NATO allies are facing as a result.

The omission has put the Pentagon’s budget request at odds with the wishes of some in Congress who will make the final decisions about defense spending.

Sen. James Inhofe of Oklahoma, the Senate Armed Services Committee’s top Republican, characterized it as inadequate and a reflection of the world that Biden “wishes for - but not the world as it is.”

Such politically charged disputes are a perennial affair in Washington, where defense the only category of federal spending that Congress has jealously guarded as its right to authorize, and not simply appropriate, year after year. Armed Services Committee Chairman Jack Reed, D-R.I., nodded to this in a statement Monday, noting that Biden’s request “is an outline and a starting point.”

Defense Secretary Lloyd Austin cheered the budget proposal for prioritizing the challenge posed by China while preserving the U.S. military’s posture of deterrence against “the acute threat of an aggressive Russia and the constantly emerging threats posed by North Korea, Iran, and violent extremist organizations.”

But Republicans say the Pentagon is being unrealistic about its numbers. At the core of their concerns is the inflation rate, which was at 7.9% in February. Biden’s defense request, however, is a 4% increase over this year’s spending — a net loss, the GOP points out, unless economic trends radically reverse.

“My colleagues and I were clear with President Biden: our warfighters need a defense budget that is 5% above the rate of inflation,” the House Armed Services Committee’s top Republican, Rep. Mike Rogers of Alabama, said in a statement.

A report published Monday from management consulting firm McKinsey & Co. found that if inflation hovers at 7%, the Pentagon would lose about 20% of its current purchasing power. “The cumulative loss of buying power from 2021 to 2026 could be some $480 billion, which is equivalent to the cost of about 6,000 F-35 fighter jets or 160,000 Patriot missiles,” the report states.

At a time in which the Pentagon has enhanced its force posture in Europe to counter Russia, sought to invest in the defense of allies in the Indo-Pacific threatened by China’s rise and tried to maintain at least some influence in the Middle East, there are growing demands for such hardware — and it is unclear whether the Pentagon’s plans will keep pace, critics say.

The fiscal 2023 budget request would fund 61 new F-35 fighter jets at a cost of $11 billion — the current budget cycle devoted $8.7 billion to procure 85 — as well as about two dozen new F-15EX fighters and 15 new KC-46 aerial refueling tankers. It also lays out $28 billion for nine new battle force ships, $7.2 billion for long-rage precision weapons, including hypersonic and subsonic weapons, and $34.4 billion to modernize the nation’s nuclear arsenal. There is also almost a billion dollars in there to improve Guam’s defenses.

But other key initiatives remain largely static. The European Deterrence Initiative, a framework for countering Russia, was awarded $4 billion for this year, and the Pentagon is seeking $4.2 billion in fiscal 2023; meanwhile the request for military assistance for Ukraine remains steady at $300 million. The administration is seeking $6.1 billion in fiscal 2023 for the Pacific Deterrence Initiative, a program rolled out in 2020 as a framework for countering China and funded at a top line of $7.1 billion this year.

Democrats already are warning that tough trade-offs may be coming, especially as the military seeks to decommission certain platforms and systems and invest those funds elsewhere. “Belt tightening in any department, particularly defense, is always a challenge, but it is also an opportunity to evaluate what is necessary and what drives innovation,” Reed said in his statement, indicating his support for “efforts to achieve billions of dollars in savings by offloading unnecessary equipment and programs.”

But Republicans maintain the Pentagon simply needs more to work with.

“We must do more to change the military balance of power in the next five years,” Inhofe said, warning that “cuts to key capabilities . . . mean we will lose ground against China’s and Russia’s rapidly expanding arsenals.”