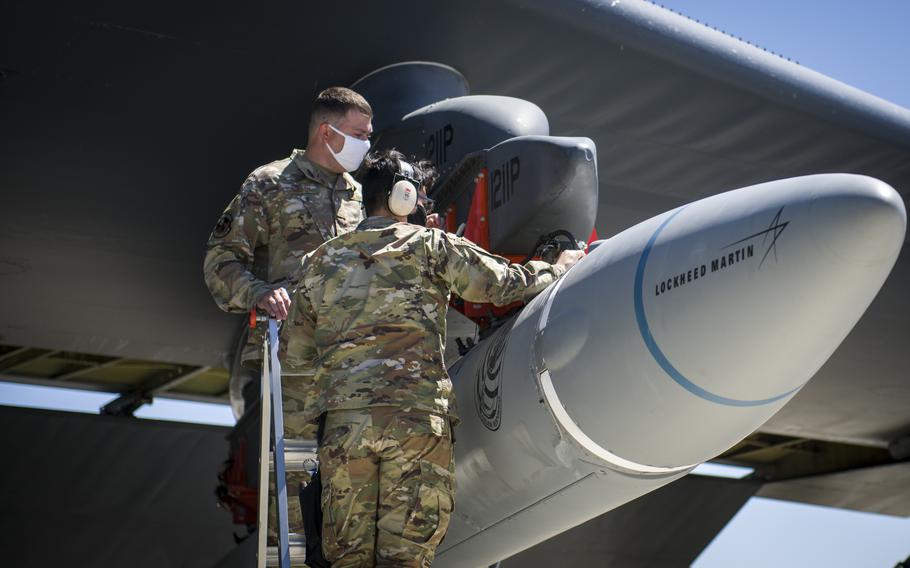 Master Sgt. John Malloy and Staff Sgt. Jacob Puente, both from 912th Aircraft Maintenance Squadron, secure the AGM-183A as it is loaded under the wing of a B-52H Stratofortress at Edwards Air Force Base, Calif., Aug. 6, 2020. (Giancarlo Casem/U.S. Air Force)

U.S. efforts to catch up with China and Russia in developing hypersonic weapons may be set back after Lockheed Martin’s air-launched missile suffered three consecutive test failures that left it on a tight schedule.

China and Russia have conducted test launches and fielded their versions of the new weapons, which can travel five times the speed of sound and maneuver in flight like a cruise missile, making them harder to detect and shoot down.

The U.S. weapon faces several hurdles in a development phase now expected to cost at least $1.4 billion before it can be found to have “early operation capability.” The Air Force hasn’t yet released an estimate of total acquisition costs or said how many of the weapons it wants.

The latest hurdle: successfully conducting fourth and fifth tests of its booster motor by June 30. Their timing will be contingent on the results of a failure review board for the third test that was to be complete by the end of last month, according to the Air Force program office.

If successful, those tests would be followed by the program’s key flight test of a fully operational missile between July and September. Added to that is completion of a production readiness review to assess Lockheed’s capability to manufacture and integrate hardware for delivery.

The hypersonic Air-Launched Rapid Response Weapon is a fast-track “rapid prototype” program that’s intended to cut months, if not years, off its development and deployment in the face of rapid progress by adversaries. The weapon is intended to be dropped from a B-52H bomber and accelerated by its booster motor before a solid glide body separates and flies at hypersonic speeds to its target.

Russia said last month that it test-fired a hypersonic missile, sending a message to the U.S. and NATO allies in advance of its invasion of Ukraine. Defense Minister Sergei Shoigu has asserted that hypersonic weapons will make up the core of Russia’s non-nuclear deterrence capability in the future. The U.S. says Russia has deployed its Avangard Hypersonic Glide Vehicle and its Tsirkon hypersonic anti-ship and land-attack missile.

China is investing heavily in hypersonic weapons as well, putting one in orbit in July that flew 25,000 miles in more than 100 minutes of flight, according to the top U.S. nuclear commander.

Russia and China are able to press ahead on new weapons without the oversight by lawmakers and the public that can slow testing and deployment under the Pentagon’s acquisition system.

Heidi Shyu, the Defense Department’s undersecretary for research and engineering, said through a spokesperson that she’s “supportive of the Air Force’s aggressive efforts to accelerate development,” but “the Sept. 30 operational capability date is a very aggressive schedule.”

The Air Force is also hedging its bets on the declaration date. Its program office said in a statement that it “continues to aggressively pursue” an early operational capability “while maintaining high standards of technical rigor.” In spite of the test failures to date, “it is still possible to provide” that capability “in late calendar year 2022 provided future flight testing concludes as per the current plan.” The flight test program “has successfully demonstrated a number of first-time events,” it said.

The chairman of a House subcommittee that monitors the program is skeptical of U.S. efforts to date and specifically whether the Air Force can achieve its goal this year. “The U.S. has a lot of catching up to do with China,” Representative Jim Cooper, a Tennessee Democrat, said. “It will take much more than a Sept. 30 press release to regain the lead we’ve squandered since the 1970s.”

The Pentagon’s hypersonics effort needs “funding, engineering excellence, and rapid testing to begin to reach parity. Even then, I worry that the U.S. doesn’t even know how to catch up, particularly given the repeated failures” with the missile program that “we’ve had to date on components that should not be technically challenging,” Cooper said in a statement.

A production decision on the first 12 missiles that was previously planned for January is on hold pending the results of the December failure review, the two additional booster motor tests and the full-missile flight. The program office said it “will not award a production contract without a Production Readiness Review and a successful All Up Round Test Flight.”

“To date, the team has not found any systemic quality issues at Lockheed or its subcontractors” that caused the test failures, the program office said.

The three failures so far have occurred during limited exercises focused on demonstrating the performance of the missile’s booster motor after separating from the bomber but without the hardened glide-body warhead of an operational missile.

The remaining schedule of increasing complexity to meet a Sept. 30 declaration “leaves little to no room for test delays or additional flight failures, and so it will likely be challenging,” said Kelley Sayler, an analyst in advanced technology such as hypersonics.

Cristina Vite, a spokesman for Bethesda, Maryland-based Lockheed, said in an email that “the joint government and Lockheed Martin team closely reviews every test to ensure quality measures remain in place.” She said that with each test the missile “continues to gain significant technical maturity while accomplishing many first-time milestones.”

Lockheed was awarded an initial $480 million development contract in April 2018 that was broadened in December 2019 to $986 million.