In a divided nation, a rare moment of unity on Ukraine Iryna Tomaieva, left, gathers with others to show their support for Ukraine near the White House on Feb. 27, 2022. (Matt McClain/The Washington Post)

For Houston restaurant owner Jerry Jan, 41, it’s the images of Ukrainian families being separated, possibly forever, that breaks his heart.

At an American Legion hall in Phoenix, Gary Horton, 68, wants to see Russia cut off completely, including its oil.

And at a market in Louisville, Paige Stoltz, 30, says she feels grateful to wake up in her own bed, although there’s a heaviness about that relief because she knows so many others have lost their sense of safety.

In a divided nation, the invasion of Ukraine is proving the rare moment when Americans of differing political persuasions can find agreement. In dozens of interviews across the country, Democrats, Republicans and independents expressed dismay at the violence and backed sanctions against Russia, while stopping short of advocating military intervention.

Many said they were following the conflict daily — watching the nightly news, skimming Facebook and scrolling through videos on Twitter. There was near-universal condemnation of the war, but also unease about the potential for escalation.

In his State of the Union address on Tuesday, President Joe Biden pledged to hold Russian President Vladimir Putin “accountable” for the invasion and said that Putin would pay a “high price” for his actions. Biden also made clear that the United States would not engage militarily except to protect members of NATO.

As Biden spoke about the United States’ support for Ukraine, Republican and Democratic members of Congress rose together to applaud, an unusual tableau in today’s harshly partisan landscape.

Americans still differ markedly by party in their assessment of Biden’s handling of the situation. Still, recent polls show large majorities in agreement on certain aspects of the war in Ukraine.

A survey conducted last week by Yahoo News and YouGov found 74% of Americans believe that the invasion of Ukraine was unjustified. A CBS News-YouGov poll found 65% of Americans say the United States should send weapons and supplies to Ukraine.

Americans have turned out at pro-Ukraine demonstrations and donned the blue and yellow of the Ukrainian flag. Several states — run by Democratic and Republican governors — have banned Russian liquor from their shelves in a gesture of solidarity. 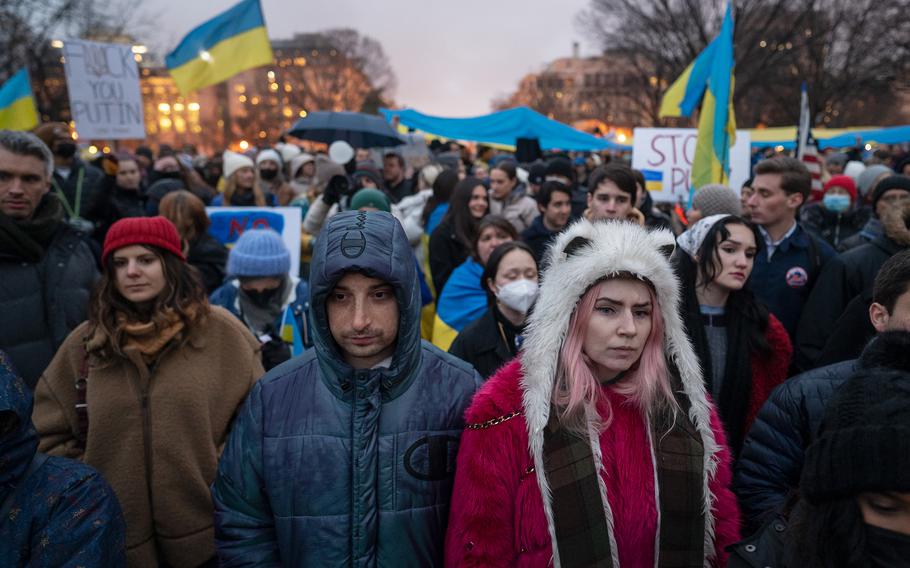 Protesters demonstrate against Russia's invasion of Ukraine across from the White House in Lafayette Square in Washington on Feb. 24, 2022. (Craig Hudson/for The Washington Post)

“We’re seeing missiles crash into Ukrainian apartment buildings, we’re seeing tanks rolling in the streets, we’re seeing hundreds of thousands of people stream across the border into neighboring countries,” said Charles Kupchan, a professor of international affairs at Georgetown University and a former official at the National Security Council.

This is not a moment where “the majority of the American public is saying, ‘I’m not interested, let’s tend our own garden,’ “ Kupchan said.

Scott Allen, 43, a software engineer in Houston, says he has been “doom scrolling at least twice a day” on Twitter for updates on the crisis. He has a Ukrainian colleague who fled to Spain before the invasion started. Allen doesn’t see the conflict ending “easily or well” but thinks Biden was wise to focus on it in the State of the Union address. “Ukraine is clearly something that Americans can come together on,” Allen said.

Horton also watched the speech Tuesday. The following day, he was sitting on a bar stool at the American Legion Post 107 in Phoenix, talking with a friend. Horton dislikes Biden — “too socialist for me” — but said he agreed with the president’s approach to the crisis. “I don’t want any of our troops in there,” he said.

Putin’s actions are galvanizing some Americans to call for more sanctions. The United States has banned Russian aircraft from American airspace, worked to cut off major Russian banks’ access to the global financial system and sanctioned a circle of oligarchs close to Putin. But the Biden administration has not taken aim at Russia’s energy exports, partly because it could send oil prices soaring.

Ime Etuk, 47, a filmmaker and founder of a nonprofit in Portland, Ore., noted the absence of the topic of energy sanctions in Biden’s address. “It’s a little bit of the elephant in the room,” he said.

Etuk said he would accept a temporary jump in gas prices if it would end the Russian invasion and limit Ukrainian suffering. He said it’s a conversation that U.S. leaders ought to be having. “There’s an opportunity to say to people, ‘If we’re all united, how much do we really want to support Ukraine? Let’s talk about this together. Are you willing to pay more?’ “

Several supporters of Donald Trump said the former president would have done a better job handling the situation in Ukraine. Biden is “pretty much going to be the weakest president in history,” said Robert Joseph Durst, a U.S. Army veteran in Douglasville, Ga. “It’s sad.” 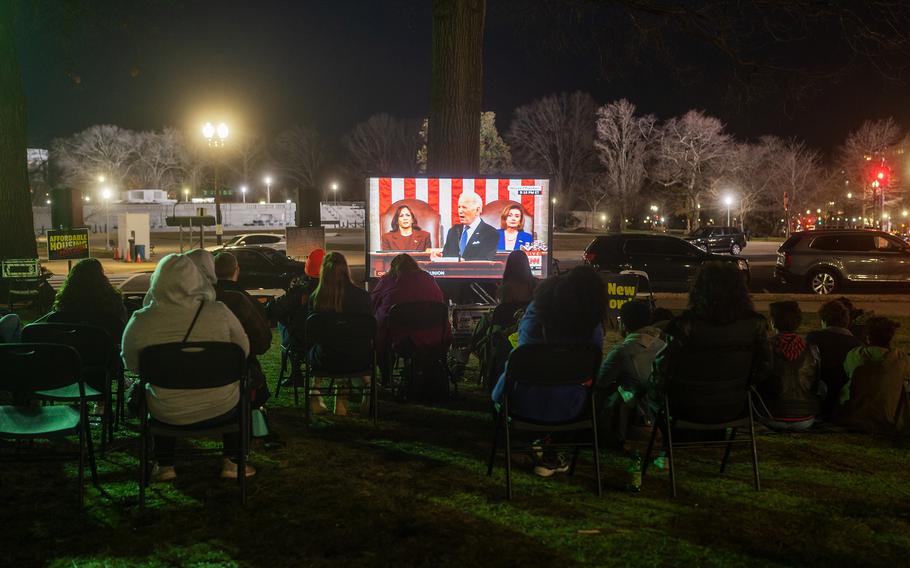 Many expressed a clear desire to do more to help Ukrainians, within limits. Bonnie Jenkins, 52, a sales manager who lives outside Nashville, said she felt horrible about what was happening. “I think we should do everything we can outside of actually fighting for them,” she said. “You wish we could, but no one wants to see Afghanistan happen again, either.”

Jenkins said she sometimes feels that democracy is under attack at home, too — by the far right and the far left, with everybody else stuck in the middle. But she knows it’s nothing like what is happening in Ukraine. “We don’t have to worry about our kids going to school and putting their blood types on their backpacks, or getting home safely, or fleeing to another country,” she said.

Adela Justice, 49, a medical librarian and bass player in Houston, said she is filled with anger toward Putin and sorrow about the plight of refugees fleeing Ukraine. Justice, whose family immigrated to the United States from Mexico several generations ago, said she’s frustrated that Americans have not focused on helping refugees from other violent conflicts across the globe.

“We’re so united in saving Ukrainians, but why not Somalians, Syrians and people from Central America?” she asked. “Because they’re Brown and the other countries are Muslim-majority. We should be united on all of it, but we’re not. That brings me great sadness.”

When Wes Lites, a philosophy professor in Louisville, thinks about the war in Ukraine, he also thinks about the long-term costs of conflict for civilians and soldiers alike. His stepson is a retired Marine who served in Kuwait and Iraq. Lites said he returned home with shoulder injuries, hearing loss and psychological trauma.

Though Lites, 66, supports Ukrainians in their fight, he doesn’t want to send American troops because the “antagonism between the U.S. and Russia has too much potential” to escalate.

Sitting at a nearby picnic table, Jose Espinoza, 24, a law student at the University of Louisville, is looking at his laptop while wearing aviator sunglasses. He says he spends at least 20 minutes a day checking in on the conflict in Ukraine, watching videos uploaded on Twitter or reading news reports.

Espinoza said he didn’t watch the State of the Union speech and doesn’t have faith that the nation’s leaders will do the right thing. “When it comes to global conflict, it’s easy to paint good guys and bad guys,” he said. “But it’s clear that Russian people aren’t in favor of this.”

Ukraine is one of so many problems to pay attention to, he said, from mitigating climate change to improving immigration policy. “It’s sensory overload,” Espinoza said. “A lot of people in my generation feel that way.”

For some Americans, the conflict in Ukraine feels far away. They’re preoccupied with more pressing concerns in their daily lives, including the recovery from two years of a deadly pandemic.

At Paradise Valley Community College in Phoenix, Mozella Crawford, 65, was using the school’s computers to search for a job. Out of work and without a permanent place to stay, Crawford was getting her news about the crisis in Ukraine through Facebook, which she logs into at a library.

“I think Putin’s acting like the school bully, picking on the smaller country,” she said. “Right now, we’re just doing sanctions, but Lord help us if we start sending troops in there.”

She laughed and said she would rely on the power of prayer. “Sometimes I think God’s the only one who can put a stop to this,” Crawford said.

Blumberg reported from Houston and Killough from Louisville. The Washington Post’s Jimmy Magahern in Phoenix; Alexandra Baumhardt in Portland, Ore.; Mark Shavin in Atlanta and Jaimie Seaton in Hanover, N.H. contributed to this report.