Mothers who fled Afghanistan for Philadelphia are welcoming 16 babies. They got a baby shower. 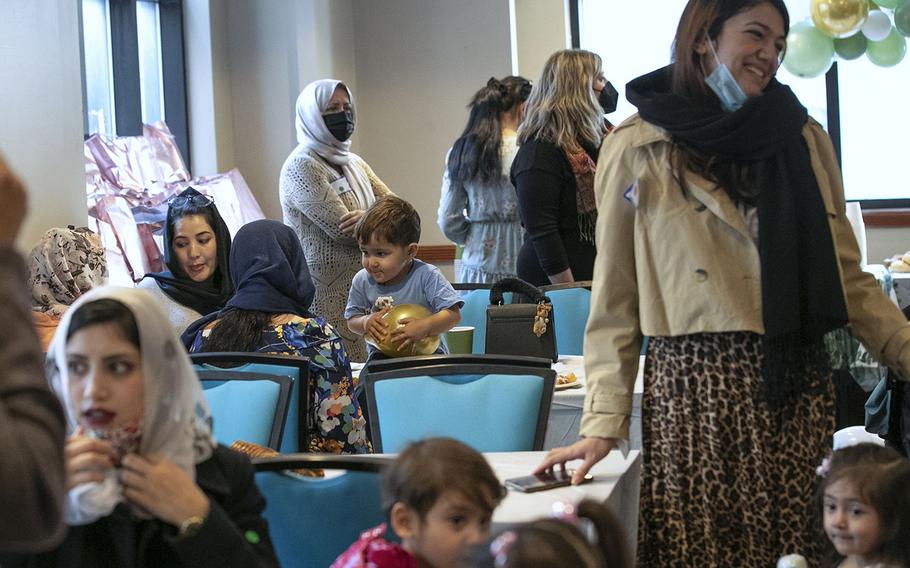 Afghan women and their children attend a baby shower hosted by the Nationalities Service Center at the Philadelphia Residence Inn by Mariott on Wednesday, Feb. 16, 2022. (Heather Khalifa, The Philadelphia Inquirer/TNS)

PHILADELPHIA (Tribune News Service) — The invitations were written in Dari, Pashto, and English.

The babies were, well, adorable.

By turn they cried out loud or slept in silence, as around them balloons popped and plates spilled and older siblings laughed and chased across a brightly decorated conference room on the second floor of a Center City hotel.

That’s where newly arrived Afghan mothers and mothers-to-be were welcomed to an old American tradition — a baby shower, and a big one, thrown last week by Nationalities Service Center, the immigrant-services agency that leads the Philadelphia region’s effort to resettle hundreds of evacuees from fallen, war-riven Afghanistan.

Some of the little ones who arrived alert in their mothers’ arms or dozing in plastic carriers are new American citizens, born in this country after their parents reached temporary, “safe haven” housing on U.S. military bases. Other babies were born in Afghanistan shortly before the Taliban takeover, held close as their families crammed aboard huge C-17 Globemasters that carried them up and out of their homeland.

None yet knows of their parents’ perilous evacuation from Kabul, of the abiding fear and torment for family members left behind, or how, as they cooed or gurgled or smiled during the baby shower, around them swirled their mothers’ dreams for their futures.

“I want him to have an education, and a good life, and a good job,” said Madina Mohammad, who cradled her 3-month-old son, Younus, named for the faithful prophet who delivered messages from Allah.

Her baby, then still in the womb, traveled 7,000 miles from a crumbling Afghanistan to be born in South Jersey, at a hospital near Joint Base McGuire-Dix-Lakehurst.

The child paid no mind to a shower that grew chaotically joyful, with balloons bouncing across tabletops and the volume of conversation rising in three languages — an event “to celebrate all the women who care for others,” said Christina Kubica, NSC’s manager of specialized health services.

And also a time to at least briefly set aside the sorrows and demands of the moment — most Afghans arrived owning only the clothes they wore — and consider the possibilities of the future.

“I have a lot of wishes for my daughter,” said Raihana Hashimi, as she held her 15-month-old child, Omalbanin. “To study and get a good job, and help the country.”

She thinks she’s found a good place to try to make those wishes a reality. “I like the city of Philadelphia. It’s good for living.” 15-month old Omalbanin Hashimi poses for the camera at a baby shower for the Afghan women and their children living in the Philadelphia Residence Inn by Mariott, hosted by the Nationalities Service Center, in Philadelphia on Wednesday, Feb. 16, 2022. (Heather Khalifa, The Philadelphia Inquirer/TNS)

The tumultuous U.S. evacuation of its allies commenced the largest national resettlement effort since the end of the Vietnam War, one in which the Philadelphia region has played a central role.

More than 30,000 evacuees have landed at Philadelphia International Airport, designated as the country’s central arrival hub. At peak, Joint Base McGuire-Dix-Lakehurst housed more than 11,000 evacuees, among the largest populations on eight military installations.

Federal officials announced on Saturday that the last group of evacuees had left the base, the final “safe haven” still in operation.

The dramatic end to the 20-year American war saw 84,600 people brought to the United States — and proved that life is unstoppable. At least 570 babies have been born in this country to Afghan evacuees, according to the Department of Homeland Security.

Locally, NSC clients have had seven children, and more are on the way, with nine women pregnant.

At the Wednesday shower, Najia Haidari held her sleeping 5-month-old daughter, Eliana, born when the family was living at Camp Atterbury in Indiana, before they were transferred to Philadelphia.

“I want her to be someone who pays back the U.S.,” Haidari said. “To be a doctor, an engineer. Whatever we received, to pay them back.”

Yes, hardships have been many and change constant, she said. But as she conversed with other mothers and friends at the shower, she declared: “I’m feeling great, because of my kids, my family, and the family of NSC that supports us.”

For now, Haidari and her family live in the Marriott Residence Inn, among about 240 evacuees who await permanent housing after being moved off the military bases. The hotel’s large, second-floor lounge has become a de facto organizing area for NSC’s efforts to provide families not just with government authorizations but a sense of community.

“Part of what’s so tough about resettlement is the loss of connection, the grandmother who would have held your baby for you while you prepared dinner,” said Gretchen Shanfeld, NSC’s senior director of program operations. A gift box is given to Madina Mohammad, who is holding her 3-month-old son, Younus, at a baby shower for the Afghan women and their children living in the Philadelphia Residence Inn by Marriott, hosted by the Nationalities Service Center, in Philadelphia on Wednesday, Feb. 16, 2022. The event celebrated the women who recently had babies or were about to give birth. Many Afghan families are still living in the hotel while they await permanent housing. (Heather Khalifa, The Philadelphia Inquirer/TNS)

Before the shower guests arrived, an adjoining conference room became a whirl of plastic table cloths, streamers, and “Very Hungry Caterpillar” cut-outs being attached to the walls.

Crayons and coloring paper were set up at a table for older siblings, as NSC staffers hustled to prepare for the event. Where were the food tongs? And scissors?

The shower was women-and-children only. All the agency’s female clients were invited, and many came, helping crowd the room with 30-some parents, children, and friends.

Glittery gift bags were stacked on a table and halfway up the wall, those and other packages containing scarves, nail polish, shampoo, pacifiers, books, clothes, winter hats, and wool play balls.

“It’s a way to say, ‘We see you, we get it, we care. We know you’re afraid,’” said NSC executive director Margaret O’Sullivan. “We all have a shared humanity here.”

In Afghanistan, the nearest thing to an American baby shower is a tradition called “jorra,” which means “gifts for the day of celebration,” Afghan journalist Malali Bashir explained in her blog, Afghan Watch.

Presents are given only by the mother of the mother-to-be, while the paternal grandmother is responsible for hosting an all-women luncheon at her home. Gifts tend toward clothes and herbal baby medicines, though better-off families may give cradles and bath sets, or even a gold ring or a locket carved with verses from the Quran, Bashir explained.

“I’m so happy to see the rest of the moms and the families,” said Fariha Hajizada, whose 2 1/2 -year-old daughter, Souda, busied herself engaging with other toddlers at the baby shower. “My daughter can play.”

The shower also was a chance for NSC workers, exhausted by the months-long demands of a sudden, mass resettlement, to put aside the daily struggle and converse on happier topics with women they’ve come to know intimately.

NSC expects to ultimately resettle 500 Afghan evacuees, by far the most among local agencies.

“We’re happy to be here with the rest of the moms and see each other, said Mohsina Ahmadi, holding her 18-month-old daughter, Boshra. “I want my kids [to have] a good education, a good life, to study and get a good job. To work for the city and the country.”