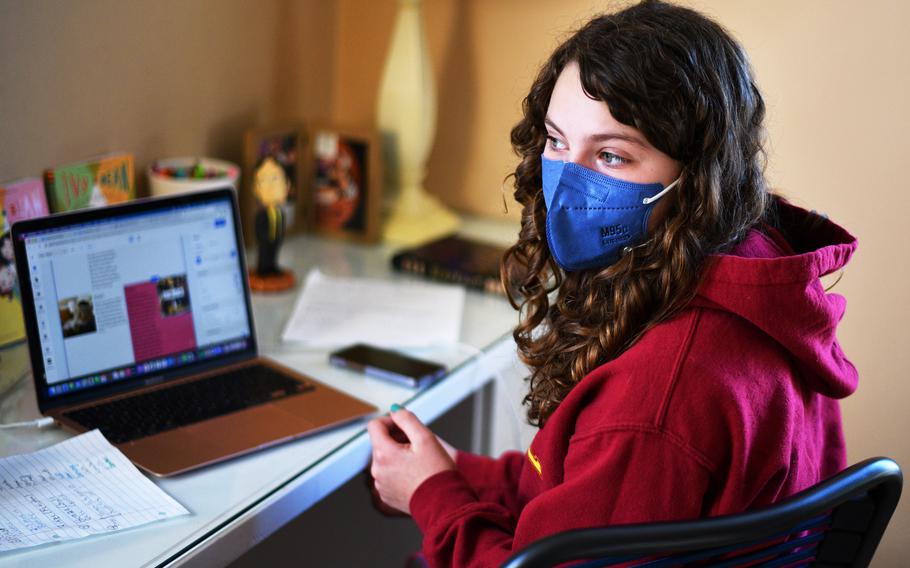 Aleena Turekian, 12, gets ready for a zoom call for her book club at her family home in Washington, D.C., February 6, 2022. With her book club zoom sessions Aleena tries to help Afghan evacuees who live in Rwanda, U.S. military bases and Virginia, to learn English and a few American colloquialisms. Some of the literature she uses is the Ivy and Bean series about the adventures of two 8-year-old girls in suburban America. (Astrid Riecken/for the Washington Post)

After learning about the pain and hardship experienced by Afghan evacuee children, Aleena Turekian, 12, thought of a perfect escape for them that would also provide an opportunity to learn some English: The fictional world of Pancake Court.

Since November, Aleena, a seventh-grader in Washington, D.C., has moderated a weekly Sunday online book club — around author Annie Barrows’s popular Ivy and Bean children’s book series — for a growing number of Afghan kids, who log in from Rwanda, Virginia, California and other areas touched by the massive airlift out of Kabul that began when the Taliban gained control in August.

Their budding friendships offer a sense of belonging that many of the participants yearned for after their lives were uprooted by the chaos in their native country. The Afghan children — mostly girls — share their favorite pop songs on a book club playlist and collectively groan whenever someone’s older relative comments off camera. All of them have become big fans of the American preteen who brought them together.

“Hi Aleena!” each participant cheerfully called out in tentative English after joining one recent Zoom session.

“How was everybody’s weekend?” Aleena asked.

“It was good,” said Hina Salarzai, 10, the club’s first member, before sharing the details of a trip that day to a hotel swimming pool near her home in Kigali, Rwanda. “That was so much fun!”

Aleena got the idea for the book club after meeting Hina online through her father, Vaughan Turekian, the director of policy and global affairs for the National Academies of Sciences, Engineering and Medicine (NASEM).

The group helped train dozens of Afghan professionals who went on to play key roles in their U.S.-backed government and Afghanistan’s civil society.

After the Taliban seized control, Turekian and his colleagues scrambled to find flights out of the country for those people and their families, part of the larger rescue effort that saw thousands of Afghans pushing to get inside the Kabul airport.

Among the first families to benefit from the NASEM effort was that of Naeem Salarzai, Hina’s father, who oversaw water management affairs in Afghanistan under former president Ashraf Ghani.

When Kabul fell, the family moved between safe houses, worried about Taliban retribution. They headed to the airport on Aug. 26 — the day a suicide bomb attack killed 13 U.S. service members and as many as 170 civilians — but left a few hours before the attack because they couldn’t get inside.

A few days later, the family made it onto a commercial flight and eventually landed in Rwanda, whose government NASEM had persuaded to take in Afghan scientists and engineers and provide them with work visas.

“I was a bit worried to know we’d be living in Africa,” Salarzai said from Kigali, the country’s capital. But “we’ve found Kigali to be very friendly and it is a very peaceful country.” 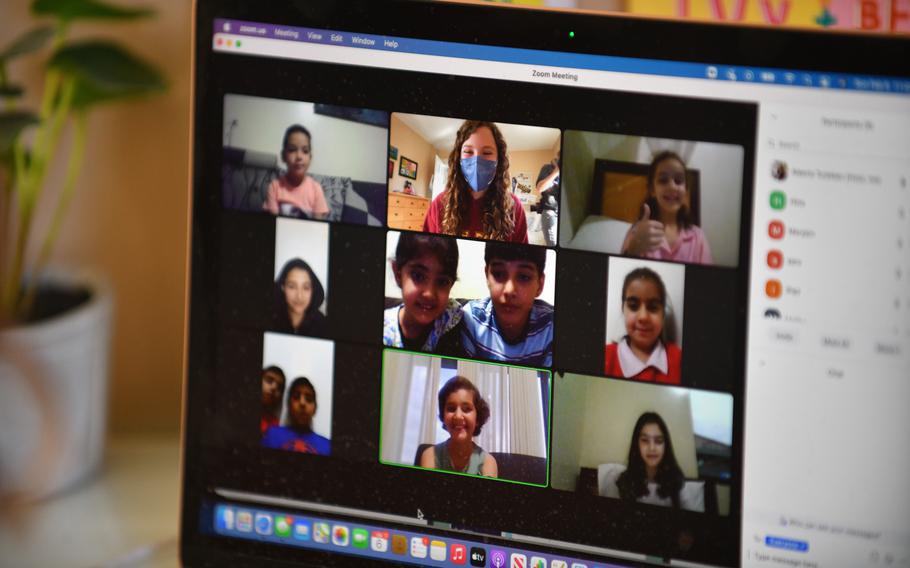 Young Afghan refugees are seen on the laptop computer during a zoom session with Aleena Turekian, 12, (top row, center) of her book club at her family home in Washington, D.C., February 6, 2022. With her book club zoom sessions Aleena tries to help Afghan evacuees who live in Rwanda, U.S. military bases and Virginia, to learn English and a few American colloquialisms. Some of the literature she uses is the Ivy and Bean series about the adventures of two 8-year-old girls in suburban America. (Astrid Riecken/for The Washington Post)

Vaughan Turekian flew there in September to check on the family and met Salarzai’s talkative daughter, who shared her desire to learn more English.

He suggested that she meet his daughter Aleena, who had been paying attention to the refugee crisis in part because it echoed the experiences of her great-grandparents, who were Armenian refugees. The girls developed an online friendship that soon evolved into something more ambitious.

“I just felt so upset that she wasn’t able to have the same privilege of education that I am able to have,” said Aleena, whose extracurricular schedule includes fencing, track and field and French lessons. “So, we decided to do a book club together to read and to help her with her English.”

Aleena turned to her old collection of Ivy and Bean books, a popular series about two 7-year-old best friends in a small American town, geared toward readers ages 6 to 9.

The books feature strong female characters whose adventures include expelling an imaginary ghost from the school bathroom, and who soak in simple pleasures, such as stirring a bowl of ice cream to make a tasty soup on a summer day.

Hina, who hopes to live in the United States, became hooked — though not immediately.

“At first, it was so boring,” she said. “But now I am understanding it. I really like it.”

She sees herself as Bean, the chatty irreverent friend, to Aleena’s Ivy, the bookish one with a lively imagination.

Their club grew after other Afghan children arrived in Rwanda and learned about the sessions from Hina.

Then, word of mouth spread to newly resettled Afghans in the United States, and even a teenage boy in Kabul still hoping to leave.

Now, with 16 regular book club members, Aleena is the master of ceremonies for a world free of worries about violence or persecution and, instead, filled with quandaries such as how to explain certain American words to a group of Afghan children.

“Aleena, I’m sorry. What does that mean?” one girl asked during a session.

“Boogers?” Aleena replied, sighing before trying to describe dried nasal mucus politely. Giving up, she searched for images of people picking their noses and shared them on her screen.

“Oh! I understand now,” the girl said, while the group erupted in giggles.

Aleena treats the sessions like casual school lessons, explaining how contractions, like “they’d,” work and going around the Zoom room to make sure anyone who wants to read can.

She keeps notes on words the group has had trouble with — such as “plunge” or “cul-de-sac” - and posts them with definitions on the website, which also links to a Spotify playlist with the Afghan children’s song choices. So far, the “Frozen” movie soundtrack, Olivia Rodrigo, Taylor Swift and BTS have made the cut.

Some of the members who don’t know much English are content to let the others read. One boy who knows English whispers the words into his younger brother’s ear, who then repeats them out loud.

Most of the children endured days of hardship while their families attempted to escape Kabul, often after a phone call from someone at NASEM alerting them that they’d have to try to get inside the airport on their own. 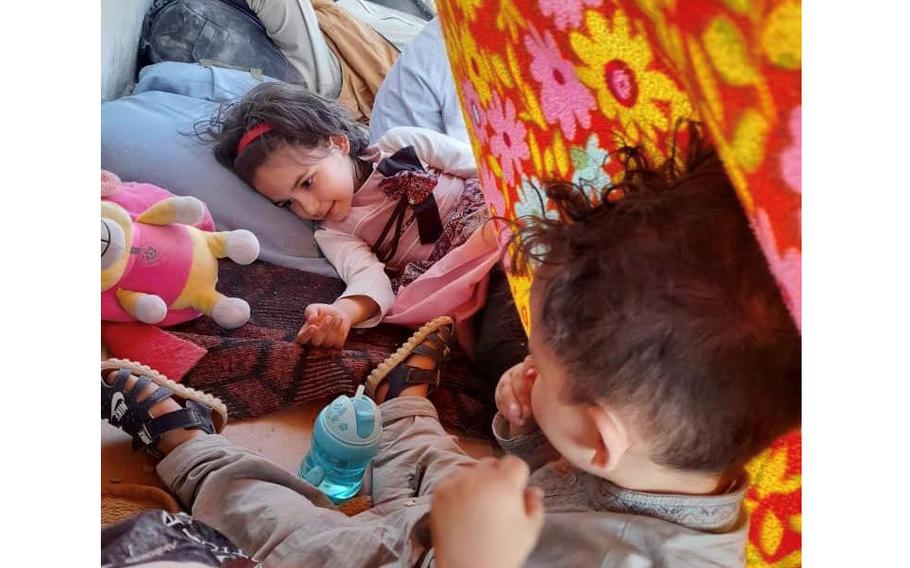 Maliha Asady, 7, waits with her younger brother Wafiullah, 2, at the Kabul airport in August 2021 before her family was turned away. Now in Rwanda, Maliha is part of the online Ivy and Bean book club. (Courtesy of Hamid Asady)

Hamid Asady — a former engineer for the Afghan National Army whose daughter Maliha, 7, participates in the group from their home in Rwanda — described leading his family of five through a canal flooded with human waste that ran parallel to the Kabul airport grounds to reach U.S. service members stationed at the entrance gate.

They got in after some pleading, then waited for hours in the hot sun for a chance to talk to a U.S. official in charge of allowing families to board planes. Asady showed the official a letter NASEM had secured from the Rwandan government guaranteeing them passage on a diplomatic flight.

The official rejected the letter, saying that only U.S. passports were being accepted, and ordered Asady and his family to leave the airport, he said.

“My kids started to cry and I felt for them,” recalled Asady, who was eventually able to get his family out through the northern Afghan city of Mazar-e Sharif. “I said to myself: ‘What am I putting my kids through?’”

His daughter Maliha doesn’t talk about those experiences, he said. In the book club, she was initially quiet, largely because she doesn’t know much English.

But she has recently begun to open up. Before a session earlier this month, Asady asked Aleena to send him a copy of a book page that Maliha could practice reading in advance.

On the day of the session, Aleena paused when they reached that part of the book — where Bean tried to break a world record by washing and rinsing as many dishes as possible in five minutes.

“Maliha, do you want to read this page?” Aleena said.