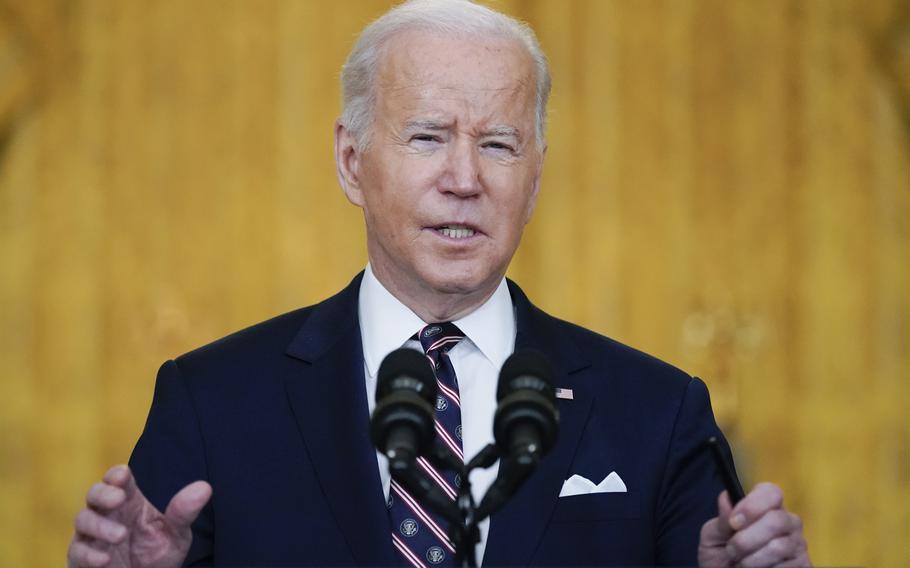 President Joe Biden speaks about Ukraine in the East Room of the White House, Tuesday, Feb. 22, 2022, in Washington. (Alex Brandon/AP)

WASHINGTON — President Joe Biden on Tuesday ordered an additional 800 U.S. troops, more than 30 helicopters and as many as eight F-35 fighter jets now in Europe to NATO countries on the alliance’s eastern flank as Russian troops begin to move into Ukraine.

The roughly 800 U.S. troops will deploy to Estonia, Latvia and Lithuania to “reinforce and reassure our NATO allies today in response to Russian admissions that it will not withdraw its forces from Belarus,” the president said in a public address from the White House.

The troops are part of an U.S. infantry battalion task force in Italy that will move to the Baltic region in the coming days, a senior defense official said Tuesday on condition of anonymity. An attack aviation battalion of 20 AH-64 helicopters from Germany will also join them.

The official did not name the task force, but Italy is home to the 173rd Airborne Brigade, which is known as the Army’s contingency response force in Europe, specializing in providing rapid forces when needed in the region, according to its website.

Additionally, “up to eight” F-35 strike fighter jets will move from Germany “to several operating locations along NATO’s eastern flank,” according to the official.

The defense official did not reveal the strike fighters’ squadron, but the Air Force sent F-35A Lightning II fighter aircraft to Spangdahlem Air Base in Germany earlier this month to bolster defenses. Those jets are from the 34th Fighter Squadron, 388th Fighter Wing at Hill Air Force Base in Utah.

An attack aviation task force of 12 AH-64 helicopters will also move this week from Greece to Poland, where the U.S. already has approximately 8,700 troops — about 4,700 of whom deployed to Poland from the U.S. in the past three weeks, the official said. The official did not specify the helicopters’ squadron.

“These forces — comprised of aviation elements and ground forces — will move within the [European] area of operations to NATO’s northeastern and southeastern flanks in coming days and are expected to be in place later this week,” the official said. “These additional personnel are being repositioned to reassure our NATO allies, deter any potential aggression against NATO member states and train with host-nation forces.”

Last month, Russia sent thousands of troops to Belarus for what it said were joint military exercise. Since then, Russia has amassed more than 150,000 troops flanking Ukraine from its northern and eastern borders.

“We want to send an unmistakable message that the United States together with our allies will defend every inch of NATO territory and abide by the commitments we made to NATO,” Biden said. “We still believe that Russia is poised to go much further in launching a massive military attack against Ukraine.”

The president also reiterated that he would not be sending troops into Ukraine to fight Russian troops, as Ukraine is not a NATO member.

“Let me be clear, these are totally defensive moves on our part. We have no intention of fighting Russia,” Biden said.

Allies in the Baltic states have been calling on the U.S. and other NATO members to send in more reinforcements over concerns about potential Russian aggression. The area is widely regarded by many security analysts as especially vulnerable to Russia given Moscow’s geographic and military advantages.

The U.S. has already sent roughly 5,000 troops from the U.S. to Poland and Germany in the past three weeks and moved about 1,000 soldiers from Germany to Romania.

On Tuesday, Russian parliament approved Russian President Vladimir Putin’s request to deploy its forces abroad after the country on Monday recognized the independence of two breakaway regions in eastern Ukraine: Donetsk and Lugansk, according to Russian state media.

“The document does not impose any specific limits on the use of the military, with the number of troops, as well as 'the areas of their activity, their goals and length of stay outside Russia' to be decided by [Putin,]” the Russian state-controlled RT news channel reported Tuesday.

Defense Secretary Lloyd Austin said Tuesday during a meeting with Ukrainian Foreign Minister Dmytro Kuleba at the Pentagon that Russia’s invasion of Donetsk and Lugansk “is threatening the peace and security and prosperity of Ukraine and the trans-Atlantic community.”

“I know that we've all heard Russia's recognition of the [Donetsk] and [Lugansk] regions of Ukraine as independent states,” Austin said. “That violates international law and Russia's own international commitments, and it directly undermines Ukraine's sovereignty and territorial integrity.”

“So let's be clear — the U.S. support for Ukraine's self-defense, sovereignty and territorial integrity is unwavering,” he added.

The Russians have also moved medical equipment and blood bank supplies into position along the border, which Biden said indicates Putin plans to launch a large attack.

“You don’t need blood unless you plan on starting a war,” he said.