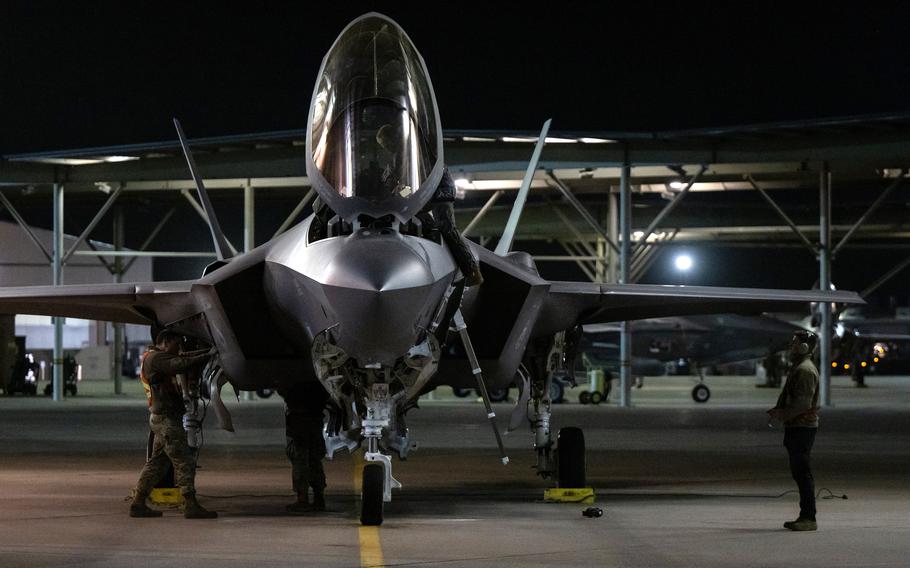 KAISERSLAUTERN, Germany — The Air Force has deployed a dozen F-35A Lightning II fighter jets and about 350 personnel to Germany as tensions continue between Russia and the West over the Kremlin’s military buildup around Ukraine.

The planes, which are from the 34th Fighter Squadron’s 388th Fighter Wing at Hill Air Force Base in Utah, arrived at Spangdahlem Air Base on Wednesday, the service said.

The F-35s are in Europe temporarily “to increase the collective defense of NATO,” Capt. Erik Anthony, a command spokesman, said Thursday.

Unlike last week’s arrival of four B-52 Stratofortress aircraft at Britain’s RAF Fairford, the deployment to Spangdahlem had not been planned as part of a regular rotation, U.S. Air Forces in Europe–Air Forces Africa officials said. An F-35A Lightning II pilot from the 388th Fighter Wing prepares to fly from Hill Air Force Base, Utah, Feb. 15, 2022, for a deployment to Spangdahlem Air Base, Germany. (Kip Sumner/U.S. Air Force)

It comes on the heels of the arrival Monday of eight F-15Es from Seymour Johnson Air Force Base, N.C., in the Polish town of Lask, USAFE-AFAFRICA said in a statement. In addition, the Air Force sent eight F-15 Eagle fighter jets to Poland last week.

Six KC-135 Stratotankers from the 100th Aerial Refueling Wing at RAF Mildenhall in England also deployed to Germany’s Ramstein Air Base on Monday, the command said.

The string of deployments comes amid ongoing fears of a new Russian invasion of Ukraine. The Kremlin claimed earlier this week that it had started to pull back troops from the border with Ukraine.

But NATO responded Tuesday that it has not seen any evidence of a de-escalation. More than 150,000 Russian troops are estimated by U.S. officials to be amassed near Ukraine.

“We are facing a dynamic environment, and this deployment significantly enhances our support to NATO’s defenses,” Gen. Jeff Harrigian, the commander of USAFE-AFAFRICA and Allied Air Command, said in a statement, referring to the F-35 jets in Germany.