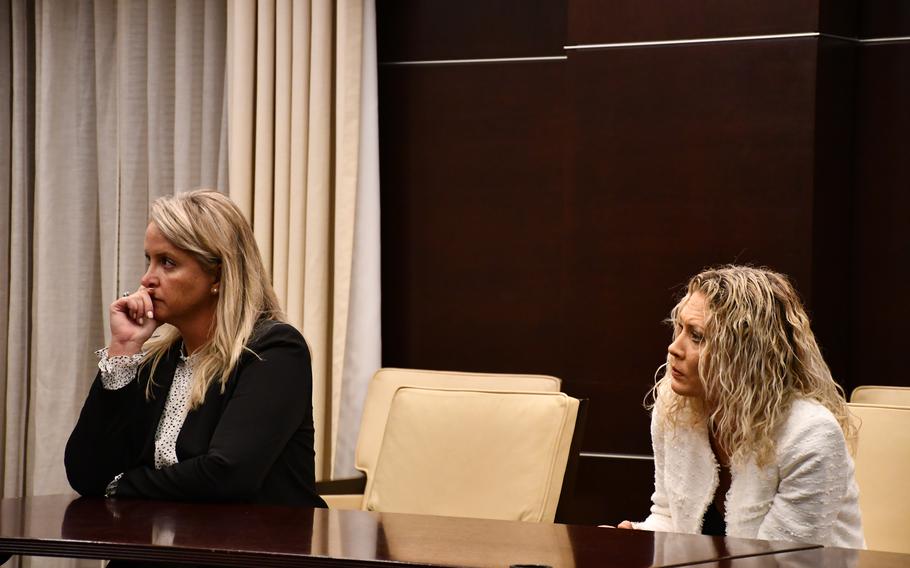 Army Maj. Amanda Feindt, left, and Navy spouse Jamie Simic, right, traveled from Hawaii to Washington, D.C., on Tuesday, February 8, 2022 and urged lawmakers to act on behalf of the service members and families exposed to contaminated water at Joint Base Pearl Harbor-Hickam. Thousands of families were affected when jet fuel leaked into one of three wells the Navy uses for its water distribution system on the Hawaiian island of Oahu.  (Nikki Wentling/Stars and Stripes)

WASHINGTON — Some service members and their families who became ill when jet fuel leaked into the water supply at Joint Base Pearl Harbor-Hickam urged lawmakers Tuesday to fight for long-term medical care for the victims and require transparency from the Navy about the contamination.

Army Maj. Amanda Feindt and Jamie Simic, a Navy spouse, traveled from Hawaii to meet with members of Congress and their aides about the water contamination incident at the Red Hill Fuel Storage Facility. The women, as well as their husbands and young children, were all sickened late last year after jet fuel from the huge underground storage facility leaked into one of three wells that the Navy uses for its water distribution system on the Hawaiian island of Oahu.

“I’m here as a mother of two children who were poisoned on American soil by an American asset,” Feindt said. “I believe the Navy failed our children. I believe it was negligent.”

Feindt and her 4-year-old daughter ended up in a hospital emergency room in December, suffering from uncontrollable vomiting, diarrhea and dehydration. Feindt experienced abdominal pain so bad that it felt like she was in labor, she said. Her daughter has since been diagnosed with a neurological condition believed to be linked to the contamination.

Before they became sick, Feindt had been reassured by the Navy that her neighborhood on Ford Island was clear of contaminants, she said.

“We were told that our water had been cleared for use. A week later, we find out that that’s not true,” she said. “I was pissed.”

Feindt and Simic are among thousands of service members and their families affected by the contamination. The water supply serves 93,000 residents on and near the base, many of whom were sickened by the drinking water. Thousands, including Feindt and Simic, were displaced from their homes. As of Tuesday, their families were still living in hotel rooms. Jamie Simic, right, a Navy spouse who was sickened by contaminated water at Joint Base Pearl Harbor-Hickam, Hawaii, speaks Tuesday, February 8, 2022, on Capitol Hill in Washington. Kristina Baehr, left, Simic’s attorney, stands by. Simic urged Congress for relief for herself and other service members and families exposed to the contaminated water.  (Nikki Wentling/Stars and Stripes)

Simic, Feindt, and about 100 other military families affected by the leak are being represented by Just Well Law, a personal injury law firm that specializes in toxic exposure and military housing. The women and their attorneys had meetings Tuesday with nine congressional offices. Feindt said they were briefed by some offices on plans “already in the works” to address the incident, though she said she couldn’t go into detail.

But Feindt and Simic did say they want lawmakers to force the Navy to disclose the list of contaminants in the drinking water. They also want all homes on and near the base to be tested and the results made available. In areas where homes can’t be made safe, the houses should be condemned and the families relocated, they said.

The women also want the U.S. government to send in toxicology and environmental health experts to test the area and the victims and provide adequate health care.

In addition, the families are seeking the same relief granted service members and families who were exposed to contaminated water at Marine Corps Base Camp Lejeune, N.C., in the 1950s through the 1980s.

Feindt and Simic are asking that service members and families affected by the Red Hill leak receive health coverage under the Department of Veterans Affairs or Tricare, the military’s health care program, for the same conditions covered for veterans and their dependents who were exposed to contaminants at Camp Lejeune. The conditions include adult leukemia, aplastic anemia, bladder cancer, kidney cancer, liver cancer, multiple myeloma, non-Hodgkin’s lymphoma and Parkinson’s disease.

“History has repeated itself,” said Kristina Baehr, one of their attorneys. “And now the remedies that helped that situation can help here. [We want them] to model legislation after Camp Lejeune and make sure people have medical care going forward for the maladies we know they’re going to have. This is not rocket science. Jet fuel is very harmful to your health.”

The National Research Council of the National Academies should conduct a full assessment of the long-term risks of the exposure, a step that was also taken with the Camp Lejeune contamination, the women said.

Families affected by Red Hill are also seeking hazardous duty incentive pay for service members who are handling the cleanup of the leak, and they want families sickened by the water to be granted a compassionate transfer to another location.

One of the first actions that they want Congress to take is to call for a “full, complete and independent” investigation into the leak, Baehr said.

Navy officials testified in Congress last week that the spill was the result of “operator error,” though an investigation is ongoing into the cause. The U.S. Environmental Protection Agency also plans to inspect the Red Hill facility at the end of the month.

Congress is already considering one measure related to the incident. The provision would require the Defense Department to comply with an emergency order from the state of Hawaii to drain the Red Hill facility. The measure, which was attached to a stopgap spending bill, would provide the Pentagon with $100 million to begin the process.

Sen. Brian Schatz, D-Hawaii, added the measure to the spending bill this week. The $100 million represents “the first round of possible funding” to remove fuel from Red Hill, his office said.

However, the Justice Department is fighting Hawaii’s emergency order to drain the facility. The department appealed Hawaii’s order last week, arguing state law does not authorize such a sweeping edict. The appeal contends the Hawaii Department of Health overstepped its authority under state law in ordering the roughly 150 million gallons of fuel in the facility to be removed.

The Navy is in the process of flushing out the contaminated well, distribution system and pipes in every home affected.