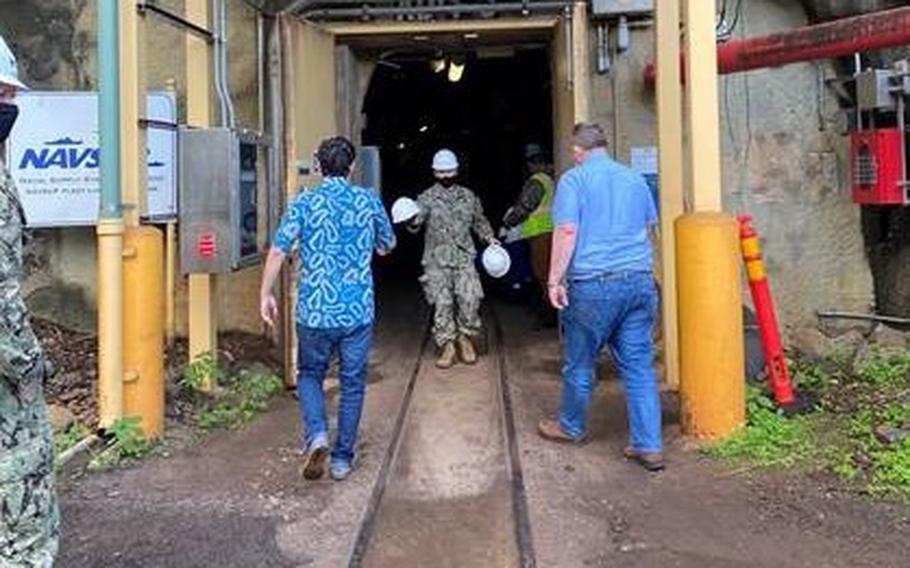 FORT SHAFTER, Hawaii — The Department of Justice has appealed an emergency order issued last month by Hawaii requiring the Navy to drain all fuel from a huge underground storage facility, arguing that state law does not authorize such a sweeping edict.

The 82-page appeal, filed Wednesday in U.S. District Court, District of Hawaii, largely reiterates arguments the Navy made last month in response to the final order subsequently issued by the Hawaii Department of Health.

The appeal contends the Health Department overstepped its authority under state law in ordering the roughly 150 million gallons of fuel to be removed.

The World War II-era underground fuel facility, which is near Joint Base Pearl Harbor-Hickam, is the source of jet fuel that has contaminated one of three wells the Navy uses for its water distribution system.

Thousands of residents at two dozen military housing areas near Pearl Harbor have been displaced from their homes after complaints surfaced over Thanksgiving weekend of foul-smelling water with an oily sheen.

Navy officials have said the well contamination likely came from fuel spills in May and November last year. The service is in the process of flushing out the contaminated well, distribution system and pipes in every home affected.

The statute that the Health Department based its order upon “was not written to address long-term issues, which are the subject of other Hawaii statutes,” the appeal said. “And the swift and truncated nature of the hearing [the Health Department] provided for review of the Emergency Order was inadequate to evaluate the entire Red Hill facility.”

The appeal argues that the appropriate means for debating and deciding the fate of the facility is in the permitting process.

“Whether the entire facility is built and operated in a manner that protects human health and the environment is the subject of ongoing permitting proceedings following [the Health Department’s] proposal to issue a permit for the underground storage tanks in June 2021,” the appeal states.

“And the actions necessary to manage long-term risk for the entire facility are also the subject of the pre-existing administrative agreement. Though the Navy shares [the Health Department’s] commitment to improving Red Hill and securing the health and safety of Hawaiian citizens and the environment, the Final Order here was not a lawful means for achieving these ends.”

The Department of Defense’s announcement Monday that it would appeal the emergency order outraged many Hawaiians.

Members of the Oahu Water Protectors hosted a news conference Wednesday outside the gate leading to Pacific Fleet headquarters. Some held up signs reading “No trust Navy,” “Our water, our land,” and “Navy lies.”

“Despite numerous public statements to the contrary, the US Navy never had any intention of defueling the Red Hill tanks …” the group said in a Wednesday news release.

Appealing the emergency order is “a grave and unforced error that undermines public trust,” U.S. Sen. Brian Schatz said in an email to his Hawaii constituents Wednesday.

“Fortunately, we have civilian oversight of the military, and this inexplicable and maddening resistance to the defuel order will not succeed,” Schatz wrote. “They will lose in court, and they will lose in Congress.”

The U.S. government hopes to resolve issues with the state of Hawaii regarding the final order through negotiation, the Justice Department said in a statement emailed to Stars and Stripes.

The appeal was filed “out of an abundance of caution to satisfy the 30-day statute of limitations that Hawai‘i law imposes on judicial review of such orders,” the statement said.

“There is ongoing, good-faith and senior level engagement at the Department of Defense, the Navy, and the Department of Justice towards a negotiated resolution that protects human health and the environment, as well as our national security,” the statement said.