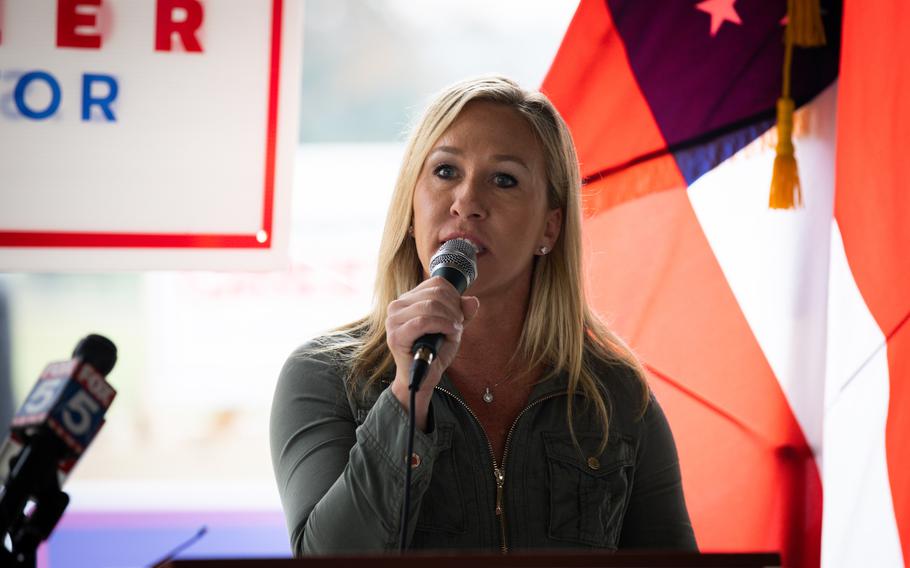 WASHINGTON (Tribune News Service) — Voices from the far-left and far-right political camps are increasingly pushing the Biden administration to cool tensions with Russia, even expressing an openness to make concessions to President Vladimir Putin.

Mounting a strong and unified posture in response to Russia’s threats to invade Ukraine is one of the few things that unite this White House with most Democrats and Republicans on Capitol Hill. But on the edges of the high-stakes policy debate over how best to ensure Ukrainian territorial integrity while not risking a military conflict with Russia and its vast nuclear arsenal, progressives and conservatives are sounding similar messages.

And they are picking up some high-profile congressional supporters.

Still, among this disparate group of thinkers advocating for a diplomacy-heavy approach there are important differences and complex nuances between their positions on the Russia-Ukraine crisis and how to avoid a bigger one.

On the right, this “de-escalation” group now includes Sens. Mike Braun, R-Ind., and Josh Hawley, R-Mo., one of the GOP ringleaders of the Jan. 6 effort to oppose the certification of President Joe Biden’s legitimate Electoral College win. It also includes a handful of GOP House members like libertarian Rep. Thomas Massie of Kentucky and Rep. Marjorie Taylor Greene of Georgia. Their most prominent off-the-Hill cheerleader is Fox News host Tucker Carlson, who has relentlessly criticized U.S. efforts to support Ukraine while rationalizing Putin’s actions.

On the left, Congressional Progressive Caucus Chairwoman Pramila Jayapal, D-Wash., and Rep. Barbara Lee, D-Calif., have warned “new troop deployments, sweeping and indiscriminate sanctions, and a flood of hundreds of millions of dollars in lethal weapons [to Ukraine] will only raise tensions and increase the chance of miscalculation.”

Also critical of the still-evolving bicameral legislative approach to deterring Putin with severe sanctions are members from the House’s progressive “squad,” including Reps. Alexandria Ocasio-Cortez, D-N.Y., and Ilhan Omar, D-Minn.

Talks have reached a crucial point on a possible bipartisan Russia sanctions bill that so far is proving elusive. But if one does reach President Joe Biden’s desk, it is expected to involve a heavy focus on deterrent sanctions covering significant swaths of Russia’s economy, some more limited “pre-invasion” sanctions that are punitive in nature, and ramped-up deliveries of lethal weaponry to Ukraine.

American public opinion — gathered and distilled from a handful of polls conducted in the past six months that asked about the Russia-Ukraine crisis — is largely on the side of the “middle” approach taken by the Biden administration, said Jordan Tama, an associate professor at the School of International Service at American University and a senior fellow at the Chicago Council on Global Affairs, which conducted one of the polls.

“Americans don’t think we should be indifferent about Russia invading Ukraine. But at the same time, Americans don’t want to go to war with Russia,” Tama said in an interview. “They recognize that would be very costly … but they want to take other steps short of war.”

Biden has ruled out deploying any U.S. military troops to Ukraine. Rather, he is pursuing — largely in tandem with the European Union and Congress — a sanctions-heavy deterrent response that would also include new export controls for key next-generation U.S. technologies sold to Russia.

But even though direct U.S. military involvement has been taken off the table by the president, some critics worry the United States is still being overly aggressive in responding to Moscow. They fear that if Russia once again invades Ukraine, and the United States and Europe respond by making good on their sanctions promises, there would be a strong likelihood of Putin retaliating with major cyberattacks on critical Western infrastructure — and by cutting off gas exports to energy-dependent European countries.

“The most serious dangers we face cannot be solved if we try to divide up the world between enemies and friends,” Jack Matlock Jr., a U.S. ambassador to the Soviet Union during the tumultuous 1987-1991 period, said Wednesday during a press call organized by a coalition of left-wing groups in favor of de-escalation. “We’re facing a continual pandemic, and none of our governments are doing a very good job of dealing with it. Ukraine is really very close to a failed state when you look at what is going on internally.”

De-escalation calls coming from the left have argued that Washington’s bandwidth and resources would be better spent by focusing on bringing an end to the global COVID-19 pandemic and also ramping up U.S. leadership of international efforts to reduce carbon emissions. Progressives argue those two massive logistical challenges would be more easily tackled if Washington has a less confrontational relationship with Russia.

On the other hand, those on the right urging some sort of de-escalation deal with Russia have argued the United States should focus on countering the growing multipronged threat from China rather than risk getting bogged down in a potentially lengthy conflict in Eastern Europe.

“Sending more American troops to Europe is a mistake,” Hawley said in a Twitter post responding to the Pentagon’s announcement Wednesday that it would dispatch an additional 3,000 troops to Poland and Romania to reassure the NATO frontline countries. “We need to send the opposite signal — that the crisis in Ukraine shows Europeans must do more in their own defense.”

White House spokeswoman Jen Psaki last week criticized Hawley for “parroting Russian talking points,” after the first-term senator argued in a letter to Secretary of State Antony Blinken that the United States should foreclose the possibility of Ukraine joining NATO, in part so Washington could prioritize dealing with the longer-term threat of China.

“China buying influence and infrastructure in Argentina to collaborate on space and nuclear energy is a direct challenge to the Monroe Doctrine and far more significant to American security than our latest NATO flirtation in the plains of Eastern Europe,” said GOP Rep. Matt Gaetz of Florida, in Monday floor remarks warning of Beijing’s recent strides to deepen its influence within the Western Hemisphere. “China is a rising power. Russia is a declining power. Let us sharpen our focus so that we do not join them in that eventual fate.”

That the arguments in favor of decreasing support for Ukraine and making concessions to Russia are coming more often than not from Republicans than Democrats is an interesting historical twist in American politics. The growing anti-interventionist wing of the Republican Party can be directly traced to former President Donald Trump’s never-fully-explained advocacy for closer ties with Russia, his personal admiration for Putin, and his repeated criticisms of what he characterized as a free-rider culture within the NATO alliance.

Since its founding in 1949, NATO has maintained an “open-door policy” whereby any qualified “European state” can apply for membership, which is granted only if all the Western military alliance’s 30 member countries agree. To allow Putin to effectively change that core foundational policy and effectively grant it a veto over new membership is anathema to many in Washington and Europe — even as it is widely recognized on both sides of the Atlantic that Ukraine is many years away, if ever, from being granted membership.

“Stating now that Ukraine will not be invited to join NATO would appear to be giving in to blackmail,” Tama said. “To make that concession to Russia at a time when Russia is threatening Ukraine would send a signal that the way you get what you want in international politics is to threaten to attack another country and then others will make concessions to you.”