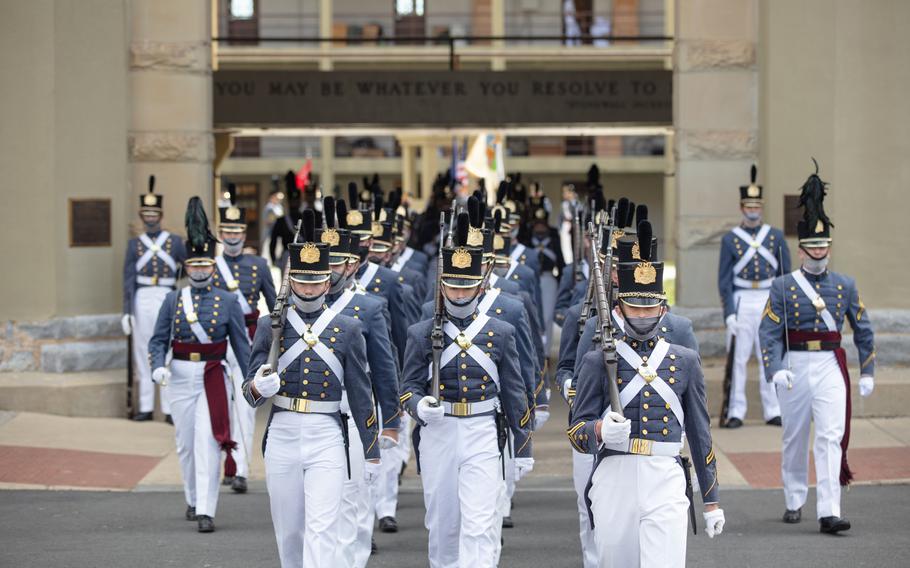 The VMI corps of cadets march out of the barracks for a change-of-command ceremony at the Lexington, Va., campus in May. (Parker Michels-Boyce/The Washington Post)

Virginia Military Institute will remain the state's only college exempt from a requirement to protect those who report sexual assaults from being punished for drug or alcohol violations.

A bill that would have stripped VMI of that exemption died Monday in the Virginia House of Delegates.

A majority of the House's higher education subcommittee voted against the legislation, which was proposed by Del. Dan Helmer, D-Fairfax, but opposed by VMI leaders.

VMI, the nation's oldest state-supported military college, is the only school in the commonwealth not required to give immunity to students who reveal, in the course of reporting a sexual assault, that they'd been drinking or doing drugs during the incident. The subcommittee's vote was along party lines, with Republicans opting to kill the bill.

Helmer had urged his colleagues on the subcommittee to support the bill, saying VMI should not be held to a different standard than the state's other colleges and universities.

"Those women and men who are victims of sexual violence will know they are guaranteed by law the right to come forward and report and ... it will take us out of the position of VMI being this outlier," he said. "It's a stain, right? Like, we want VMI to be a leader. It's a stain that it's the only college in Virginia in which you aren't protected if you come forward and report sexual assault by the law."

He later bemoaned the death of the bill on the House floor.

For more than a year, VMI's culture has been subjected to intense public scrutiny. A state-ordered investigation, conducted by the law firm of Barnes & Thornburg, concluded in June that the college suffers from a "racist and sexist culture." The firm's final report found that "sexual assault is prevalent at VMI" and that about 14% of female cadets surveyed — 11 out of 81 students — reported that they had been sexually assaulted at VMI. Another 63% of female cadets — 51 out of 81 surveyed — said that a fellow student confided in them that they'd been sexually assaulted or harassed at VMI.

VMI didn't accept women until 1997 and did so only after losing a case that went all the way to the Supreme Court. About 14% of the college's 1,650-student corps of cadets are women, according to the school's most recent data.

In remarks before the subcommittee, Helmer did not hold back. He told fellow delegates that the "need for change at VMI is pretty legion" and that that the bill could lead to VMI cadets feeling more comfortable reporting that they'd been sexually assaulted. He cited the Barnes & Thornburg survey figures, along with recent reporting by The Post that a Jan. 22 sexual violence prevention class prompted mocking comments about female cadets and the course's subject material on the anonymous social media app Jodel.

"This superintendent is committed to supporting and doing what is in the best interest of the victims of sexual assault and removing any barriers to minor infractions," Parker said. "That said ... these cases are extremely complex, and so it has been the historic position of the institute that the discretion to make decisions on disciplinary immunity should lie at the institute level, should lie with the institution, with the superintendent to make decisions based on the facts of each particular case."

Parker told the delegate that the college didn't want to lose any of its authority, especially given the school's rigorous military regimen.

"Once you put it in code ... [it's] very inflexible, right? I mean, it doesn't offer the flexibility to look at the circumstances of the case," Parker said. "And, the superintendent truly believes, given the inherent risk in our training environment, the superintendent believes that we need the ability to be able to make decisions on this or at least retain the tools to require access to [counseling] services [for drug or alcohol use] so that we can provide some accountability for a cadet who may disclose, and in that disclosure, reveal a larger problem."

VMI's spokesman said that no cadet in recent memory who has reported a sexual assault has been penalized for alcohol or drug infractions that came to light in the course of the investigation of the incident.

If that was the case, a subcommittee member asked Helmer, why was the bill necessary?

"We find ourselves in a position where VMI is telling us two different things. They're saying, 'Hey, this bill is not needed because the superintendent has the discretion ... to grant immunity.' They say, 'Hey, nobody's coming forward that's been punished for this,'" Helmer said. "So, either there is no problem in granting this bill ... passing this bill will have no impact on good order and discipline at VMI and we will learn nothing more about sexual violence. Or, there's a huge problem and ... the impact of us granting discretion to the superintendent is such that victims are terrified to come forward."