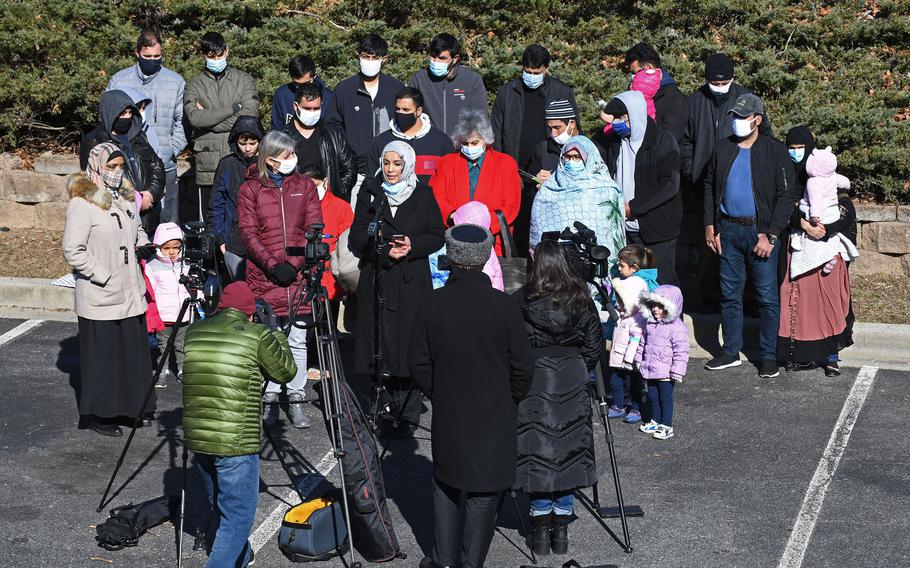 Zainab Chaudry, center, of CAIR Maryland held a news conference Wednesday at a Baltimore-area hotel to point out a lack of support for some Afghan evacuees housed in Baltimore. (Kenneth K. Lam, Baltimore Sun/TNS)

BALTIMORE (Tribune News Service) — Advocates expressed concern this week that some Afghan refugees have said they are not receiving adequate health care and other assistance as they seek to build new lives in the Baltimore area.

“We’ve been deeply alarmed by the stories that we have learned,” said Zainab Chaudry, who directs the Maryland office of the Council on American-Islamic Relations, a civil rights and advocacy group.

Surrounded by about two dozen refugees in the parking lot of a hotel near BWI Thurgood Marshall Airport where they are living, Chaudry and other advocates said at a news conference Wednesday that some of the newcomers report difficulties getting care when they fall ill or are pregnant and reaching the case workers who are handling their resettlement.

Others say there have been delays in getting documents that would allow them to work, or that they have been moved to housing in neighborhoods that they feel are dangerous, Chaudry said.

The refugees are among the tens of thousands who fled Afghanistan last summer as the U.S. pulled out from the country amid the Taliban takeover. They go through what is generally a lengthy process in which they are vetted and screened overseas and again in the U.S., where they live on military bases before they are sent to communities for resettlement.

Maryland always has been among the top destinations for refugees because of its proximity to Washington and, in the case of people from Afghanistan, the government agencies that they may have assisted over the course of the 20-year war. Many of the refugees arrive with Special Immigrant Visas granted because of that assistance, which put them in danger from the Taliban.

In August, Republican Gov. Larry Hogan said Maryland was “ready and willing” to take in those who, at risk to themselves, helped the U.S. during the war.

“We have a moral obligation to help them,” he said then, inviting those in need to contact the Maryland Office of Refugees and Asylees.

On Wednesday, state officials said the refugees CAIR is referring to are not yet “officially placed” in Maryland.

They are being resettled by the International Rescue Committee, which is responsible for them during the initial resettlement period, according to a statement from the Maryland Department of Human Services, with state services available after that if the federal government officially places them in Maryland.

“The state of Maryland supports refugee integration efforts after the federal government has effectively provided reception and placement services,” the statement said.

The IRC, among the humanitarian agencies that resettle refugees in partnership with the United Nations and the federal government, did not respond to requests for comment.

The State Department’s Bureau of Population, Refugees, and Migration, which funds resettlement agencies helping refugees in the Afghan placement program, did not respond to an email Thursday seeking comment.

Under a program called “Operation Allies Welcome,” about 74,000 Afghans have come to the United States, the State Department said in December.

Resettlement agencies, sometimes partnering with churches and other volunteer groups, ultimately work to find them apartments, English lessons, job training, schools for their children and other forms of assistance.

According to Maryland officials, as of earlier this month, about 1,300 Afghan people have been resettled in the state as part of Operation Allies Welcome. Since 2010, they said, about 10,000 SIV-holders have resettled in Maryland.

Chaudry acknowledged the difficulties faced by government and resettlement agencies trying to accommodate such a large number of refugees.

“We understand the challenges that resettlement agencies are facing, with the rapid influx of families … who have been coming under unique circumstances especially amidst a global pandemic,” she said.

CAIR said about 40 families have been temporarily housed in the hotel since October.

Chaudry said CAIR and others have offered help that has not been accepted.

“If these agencies cannot provide the services and support to these families, they need to be able to outsource to other advocacy organizations who can step in,” she said.

One refugee who has been living at the hotel said he was told by a son still in Afghanistan that Taliban representatives had come to his house looking for him because he had helped the Americans. He said that while the refugees are grateful for the assistance they’ve received, they still need things like lessons in English and driving and help in getting family members here from Afghanistan.

“American people, they are very kind,” he said.

Chaudry said another refugee, a woman, said she had been ill and bedridden but was not checked on by a caseworker during that time.

Jenna Whitney, who lives in Anne Arundel County, said she heard from a friend that there were refugees from Afghanistan in the area who were “in distress” because they were living in a hotel for months and not able to get assistance with health care or more permanent housing. She said she knew of groups elsewhere that seemed to be able to get refugees into housing much more quickly, and decided to see if she could help by bringing food, clothes and other supplies.

“It’s more a social outreach,” said Whitney, noting that food was being brought in regularly to the refugees living in the hotel.

Chaudry said the refugees have been overwhelmed by the generosity they’ve received, and it was “heartbreaking” that they’ve had difficulties getting everything they need.

“Many of these families have been deeply traumatized,” she said. “They really just want to provide a safe environment for their children, for each other, for one another.”