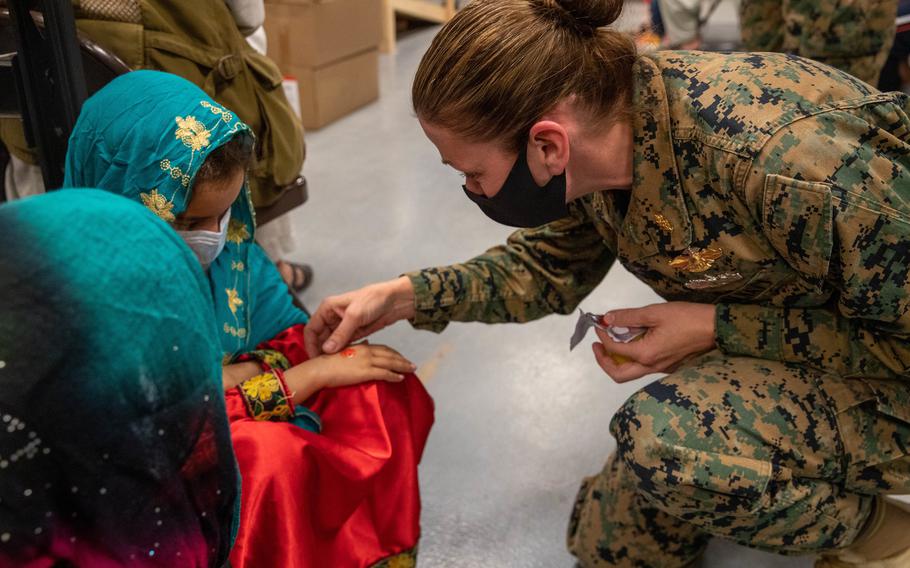 WASHINGTON — It took more than $188.4 million to support thousands of Afghan refugees housed at Marine Corps Base Quantico, Va., for three months following the U.S. evacuation mission from Afghanistan, according to a Defense Department inspector general report published Thursday.

That amount, which was tallied Dec. 3, did not include the additional $38.3 million expected then to cover expenses to return the base to its original condition and sustain operations until they ended Dec. 22, according to the report.

Quantico was one of eight military bases in the United States that housed Afghan evacuees after U.S. and coalition forces evacuated more than 120,000 people from Afghanistan in August during the final days of the 20-year U.S. conflict there. President Joe Biden officially ended the war on Aug. 31 after the last U.S. service members left the country.

The 2nd Marine Logistics Group, assigned to support the evacuees at Quantico, initially covered the expenses but the Pentagon later provided $138.4 million from DOD overseas humanitarian, disaster and civic aid funding to support the operations.

Comparatively, it cost the air wing at Ramstein Air Base in Germany about $56.3 million to house and process about 30,000 Afghan refugees between Aug. 18 and Sept. 14 before their flights to the U.S., according to a DOD IG report last month. However, the overseas mission differed from Quantico’s, which focused on housing and preparing Afghans for resettlement in the United States.

The first 241 Afghans arrived at Quantico on Aug. 29 – and that number grew to 3,755 by Sept. 25, according to the report. However, the inspector general’s report did not say how many Afghans were housed at the base, but it had the capability to support up to 5,000.

Aside from the financial costs, the operations also took a toll on readiness as the Camp Lejeune, N.C.-based 2nd MLG staffed most of the Quantico camp’s needs, according to the report. The report did not say how many Marines were sent to help.

“The extensive use of the unit’s workforce disrupted its normal operations at both MCB Quantico and Camp Lejeune, which could impede future missions,” the report said.

For example, some of the Marines were undergoing training at Marine Corps Base Twentynine Palms, Ca., when they were redirected to support the Afghan evacuee mission. That training had already been canceled twice before because of the ongoing coronavirus pandemic, according to the report.

Additionally, about half of the sustainment group’s medical personnel were sent to support operations at Quantico, “creating a burden to their home station medical and dental readiness, and increased risk to troop readiness,” the report said.

Some military equipment was also affected in the operations. About 80 military tents borrowed from Camp Lejeune to house the Afghans must be destroyed due to wear and tear, and air-conditioning units and generators used will need to be replaced sooner than expected “due to the unplanned workload of the mission,” according to the report.

The DOD inspector general called the mission a success overall, despite challenges stemming from a lack of time to prepare for the operation. There were, however, two failures highlighted in the report, only one of which was remedied.

The first was an early failure to provide the evacuees all 13 vaccinations recommended by the national Centers for Disease Control and Prevention. This included immunizations against tetanus, hepatitis A and B, influenza and Rotavirus.

Medical professionals there told inspector general auditors that they thought only four of the 13 – coronavirus, varicella, polio and measles, mumps and rubella vaccines – were required. However, they offered the remaining nine vaccinations after auditors informed them of the need.

The second issue was one of accountability. Upon arrival, the evacuees were counted and registered, but the Quantico operation did not check to ensure the Afghans stayed on the base. Instead, they “relied of Afghan leaders and interagency partners to inform the command when individuals went missing.”

Other Defense Department installations supporting the evacuee housing mission, such as Fort Lee, Va., and Joint Base McGuire-Dix-Lakehurst, N.J., conducted daily accountability checks of all evacuees.

“Without proper accountability of personnel, it was difficult for Task Force Quantico personnel to determine if any Afghan evacuees were missing in an emergency or other unexpected events,” the report said.

The report did not issue a recommendation to remedy the issue because the Quantico mission ended two weeks ago, according to the report.

The other bases that housed the approximately 67,000 Afghans are Fort McCoy in Wisconsin, Camp Atterbury in Indiana, Holloman Air Force Base in New Mexico, Fort Bliss in Texas and Fort Pickett in Virginia. Fort Lee and Fort Bliss also have ended their evacuee-housing missions.