Blinken says too early to step up Russia sanctions over Ukraine 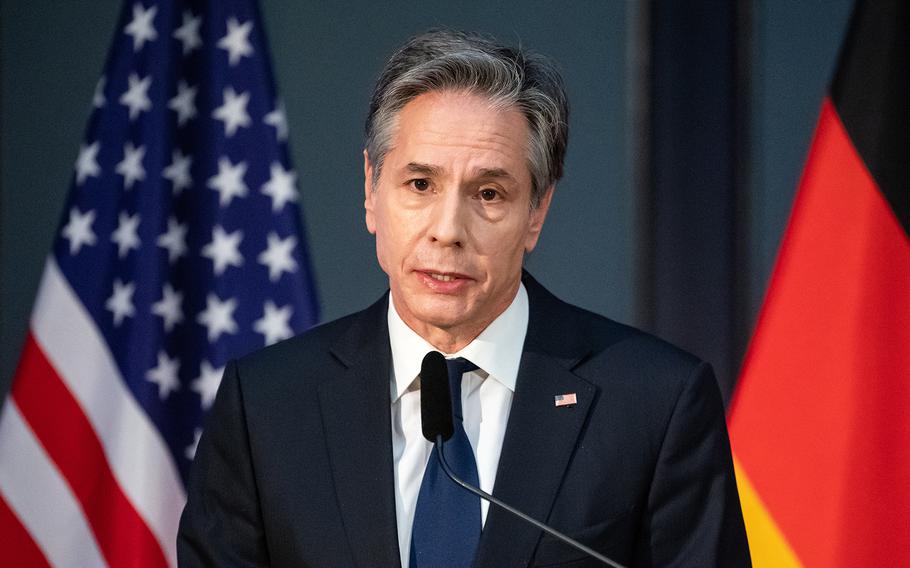 Secretary of State Antony Blinken speaks at a joint event organized by the German Marshall Fund, the American Council on Germany, the Atlantic Bridge and the Aspen Institute at the Berlin-Brandenburg Academy of Sciences on Jan. 20, 2022, in Berlin. (Bernd Von Jutrczenka, Pool, Getty Images/TNS)

WASHINGTON (Tribune News Service) — U.S. Secretary of State Antony Blinken rejected pressure to immediately escalate sanctions on Russia for its military buildup around Ukraine, saying it would limit the West’s options in the future.

The U.S. is tracking the security situation in Kyiv, the Ukrainian capital, and a U.K. warning that Russia is plotting to install a pro-Kremlin government in Ukraine is part of the Kremlin’s playbook for encroaching on its neighbor, Blinken said in a round of interviews on U.S. Sunday news shows.

“We’ve been concerned and have been warning about exactly these kinds of tactics for weeks,” he said on NBC’s “Meet the Press.”

As the U.S. weighs whether to pull out from Ukraine the families of diplomats, Blinken said, “we’re tracking intensely, hour by hour and certainly day by day” whether Kyiv is still safe.

Blinken said the U.S. has focused with its European allies on building up the threat of “massive consequences” for Russia to dissuade President Vladimir Putin from sending forces into Ukraine and on leaving the door open to diplomacy.

“The purpose of those sanctions is to deter Russian aggression and so if they’re triggered now, you lose the deterrent effect,” he said on CNN’s “State of the Union.”

As part of deterrence, the Biden administration has provided more defensive military aid to Ukraine last year than in any previous year, Blinken said. Almost 200,000 pounds (91 metric tons) of aid, including “ammunition for the front line defenders of Ukraine” arrived on Friday, according to the U.S. embassy in Kyiv.

Russia is continuing a military buildup, sending troops and armor to within a few miles of the Ukrainian border in neighboring Belarus for joint military drills that start Feb. 10. Russia denies that it’s planning a further invasion into Ukraine.

Blinken and Russian Foreign Minister Sergei Lavrov held inconclusive talks in Geneva last week that failed to resolve the standoff over Ukraine. Blinken earlier visited his Ukrainian counterpart in Kyiv and held talks in Berlin with U.K., German and French allies. The U.S. this week plans to present written responses to Russia addressing its concerns.

The Foreign Ministry in Moscow on Sunday dismissed the U.K.’s allegation of a Russian plan to install a friendly regime in Ukraine as “nonsense.”

“We have rallied allies and partners around the world,” Blinken said on NBC. “We are preparing massive consequences for Russia if it invades Ukraine again.”

Some U.S. lawmakers joined Ukraine in calling for a sharper response now.

Sen. Chris Coons, a Delaware Democrat, argued for a bipartisan bill that would “apply some sanctions now.”

“But the very strongest sanctions, the sorts of sanctions that we used to bring Iran to the table, is something that we should hold out as a deterrent to prevent Putin from taking the last step of invading Ukraine,” Coons said on “This Week.”

Sen. Joni Ernst, a Republican from Iowa, said President Joe Biden’s administration has pursued “a doctrine of appeasement” against Russia.