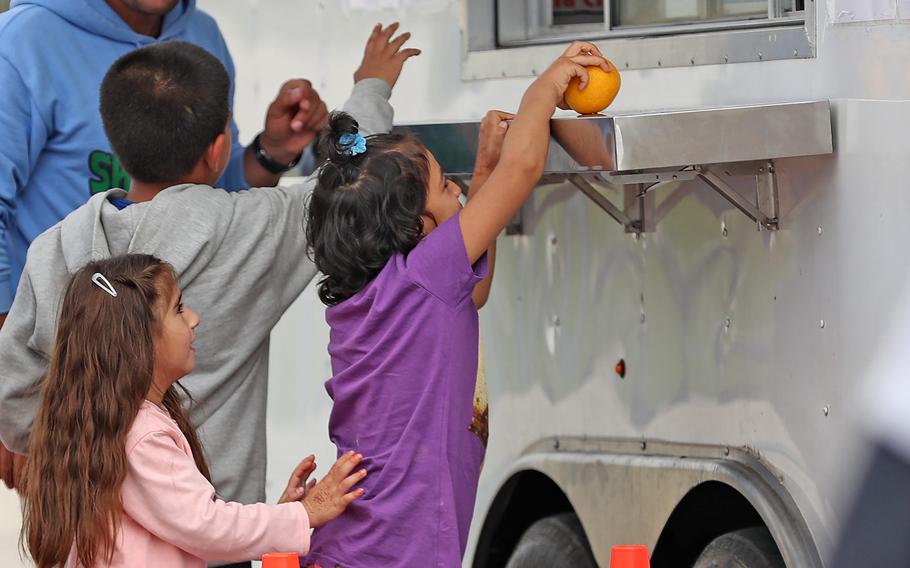 Children get fruit at a grab and go truck outside a community at the Operation Allies Welcome Afghan evacuees settlement Oct. 14, 2021, at Camp Atterbury in Edinburgh, Ind. (Kelly Wilkinson, IndyStar/TNS)

(Tribune News Service) — They arrived as “guests” to the United States, but now, dozens of Afghan refugees are calling Indianapolis home.

For months, that word has shaped how Afghan people have been welcomed here in the U.S.

Other officials — from the U.S. Army and the Indiana National Guard, even Gov. Eric Holcomb — have all used that expression when referring to the thousands of Afghan people beginning the next chapter of their lives here, in the “Crossroads of America.”

In their eyes, they aren’t refugees or evacuees — they’re guests.

With that hospitality, Camp Atterbury began welcoming Afghan people in September after the violent Taliban takeover in Afghanistan. The Johnson County base was one of eight nationwide sites designated to be a “safe haven,” offering temporary refuge for Afghans while they awaited permanent resettlement across the U.S. 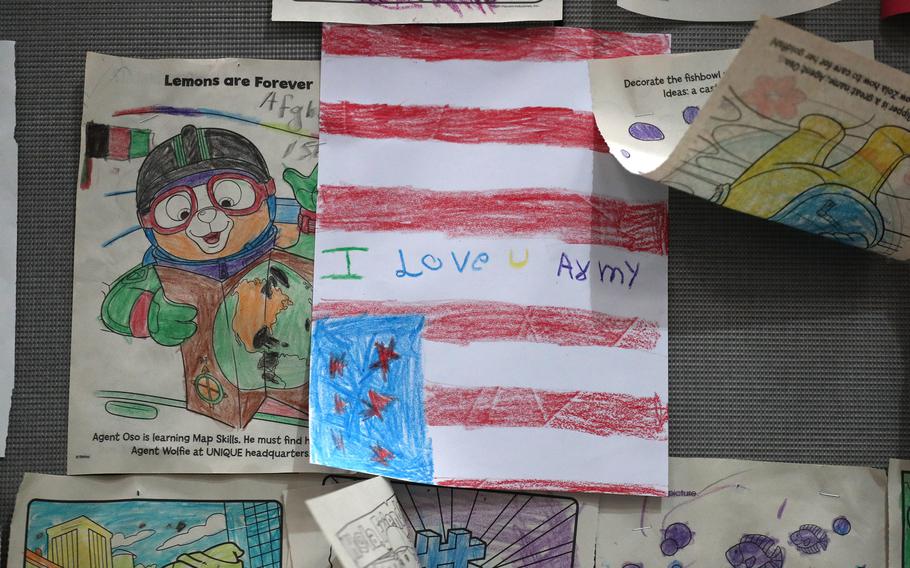 Children's drawings line the walls in the intake facility where evacuees go through processing when they arrive at Camp Atterbury for Operation Allies Welcome. (Kelly Wilkinson, IndyStar/TNS) 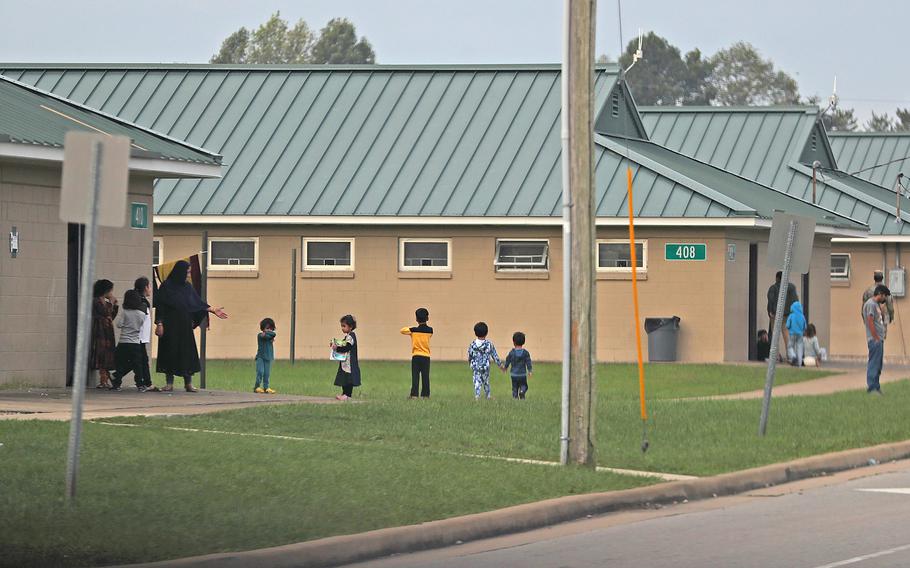 How many Afghan refugees are in Indiana?

At the peak of its operations, the base housed about 7,200 evacuees. That number combined with hundreds of soldiers and personnel transformed the Johnson County base into a mini-city of its own.

People moved out of the camp at various times, depending on their individual cases and resettlement agencies’ capacities, but by late November, nearly half the population had been resettled across the U.S.

How many Afghan refugees remain at Camp Atterbury? Today, the majority have been resettled, and about 1,200 evacuees remain at the base, Public Affairs Officer Maj. Jennifer Pendleton told IndyStar on Thursday.

“You see how excited people are to finally leave,” Pendleton said. “They get to start anew and it’s great ... It’s really promising and fills you with a lot of positive vibes.”

Resettlement agencies across the country, including Exodus Refugee Immigration in Indianapolis, have ramped up efforts to welcome the influx of new residents.

“The pace of arrivals has been high and sort of nonstop,” Cole Varga, executive director for Exodus, told IndyStar. “But the staff has been unbelievable ... to help make sure people are welcomed well to Indianapolis.”

Since September, they’ve been welcoming about 20-50 Afghan people per week in Indianapolis, Varga said, though there have also been some families going to other cities such as Bloomington and Muncie.

By the end of this week, Exodus will have helped 280 people resettle in the Indianapolis area, Varga said. For context, in all of 2020, the agency helped resettle 175 people.

In addition to Exodus, other statewide agencies include Catholic Charities in Indianapolis and Catholic Charities-Fort Wayne, and officials hope to eventually have about 700 Afghan evacuees resettled across the state. So far, about 450 of them have made Indiana home, according to Pendleton.

At Camp Atterbury, as operations are winding down, Pendleton said they are “optimistic” about getting everyone resettled by the end of January.

To date, more than 52,000 Afghan evacuees have been resettled across the U.S., according to DHS.

How to help Afghan refugees in Indiana

Team Rubicon, a nonprofit focused on disaster response, was collecting and coordinating donations for evacuees at Camp Atterbury. Though donation efforts have ended as of Dec. 7, the nonprofit organization will send all remaining donations to various resettlement agencies. Visit teamrubiconusa.org/resettlement to learn more.