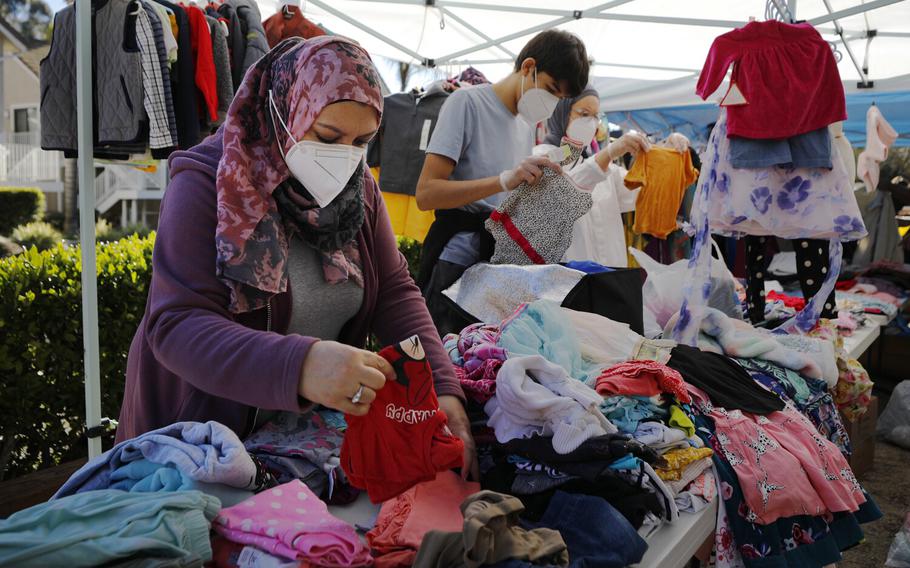 Zulfar Shaker, left, and other volunteers from the San Diego Afghan Refugees Aid Group sort through clothes during a distribution event to help afghan refugees on Sunday, Jan. 9, 2022. The volunteer event distributed clothing, food and toys to afghan refugees who recently came to the United States and are living in hotels. (K.C. Alfred /The San Diego Union-Tribune)

(Tribune News Service) — Yama Meerzada dug through boxes of diapers on Sunday morning outside of a hotel in La Jolla, confirming in Pashto with the parents of a 1-year-old which size they needed.

The family was one of 20 attending a donation distribution event by San Diego Afghan Refugees Aid Group in a grassy space next to the hotel parking lot. The group formed as Afghanistan fell under Taliban rule last year, anticipating many Afghan newcomers would be arriving in San Diego.

Meerzada said that when he saw news footage of a woman in Afghanistan handing her child over a wall to a U.S. Marine in August, he felt like he had to do something to help.

"That literally shook me," he said.

He found that many in San Diego's Afghan and Afghan American community felt the same way and soon the aid group was formed. Initially, its founders thought that it would exist only temporarily, ending its work by December at the latest. But they soon realized that the amount of new arrivals paired with short-staffed resettlement agencies and an ongoing housing shortage meant that many would need long-term community support.

They offer food and clothing donations, as well as furniture and household items after families manage to move into homes. Volunteers transport families to medical appointments and translate conversations with the doctors into Dari and Pashto, the two main languages spoken in Afghanistan. The organization is also connecting newcomers with jobs in local restaurants and other businesses.

On Sunday, the group hosted its second donation distribution event, with more than a dozen volunteers setting up a series of canopies and tables filled with toys and clothing at one of the hotels currently housing many Afghan families. ICNA Relief provided bags of groceries for the families as well. About 120 people — parents and children — showed up from their hotel rooms to get help.

The family of seven that Meerzada was guiding around the donation tables had been living in a hotel room in San Diego for about a month after spending four months on a military base in Indiana.

Because of San Diego's housing shortage, resettlement agencies have long struggled to place refugees into long-term living situations quickly. That challenge only grew more intense with the sudden arrival of hundreds of Afghans late last year.

Shafiqullah Fazli, the father of the family that Meerzada helped, said he was grateful for the aid group.

"We're happy to have this support," he said, with Meerzada translating for him. "We don't have anyone else."

Fazli said he'd been injured, lifting his shirt briefly to reveal a thick scar down the length of his torso. He'd also hurt his leg, he said.

One of his sons selected a Lincoln Logs set from the table of toys and hugged the box close, following Fazli through the event.

Meerzada said that visiting families and hosting events where they are staying have helped the aid group figure out what families need.

"The whole dynamic of the culture, although poverty is there, they are very proud. They can't ask for help," he said. "If you ask, 'Do you need anything?' They say, 'No, I'm fine.' But if you go check their household, they have nothing."

Volunteer Waheeda Noor said she had already been to deliver items to one family before the event. She planned to deliver items to eight more families later in the day and possibly take another family that has moved into an apartment to buy a rug if she had time.

She spends her spare time looking for free furniture on apps like OfferUp, she said, and volunteers with the aid group several days a week.

She feels called to help because of her own experience coming to the United States as a refugee in 1990.

"I've been there," Noor said. "This is all culture shock for them."

Many volunteers are storing donated clothing in their homes, according to Hossai Tahnas, who helped organize Sunday's event. Since the aid group members live all over the county, they're able to gather items in their area to bring to the newcomers. She said that most volunteers have full time jobs as well.

That includes Rashid Paband, who is a doctor at a local hospital and came to San Diego from Afghanistan decades ago. He said despite being busy and short-staffed because of the most recent wave of COVID-19, he manages to volunteer 10 to 20 hours a week with a couple of community organizations, including San Diego Afghan Refugees Aid Group.

The organization recently applied for 501c3 status as a nonprofit, Meerzada said. The group has used almost all of the money that it received through individual donations in its first months. He's hoping to reinvigorate the organization's fund now that it is an official, long-term group.

He's worried that because of the speed of the news cycle, many have already forgotten about the needs of Afghan refugees.