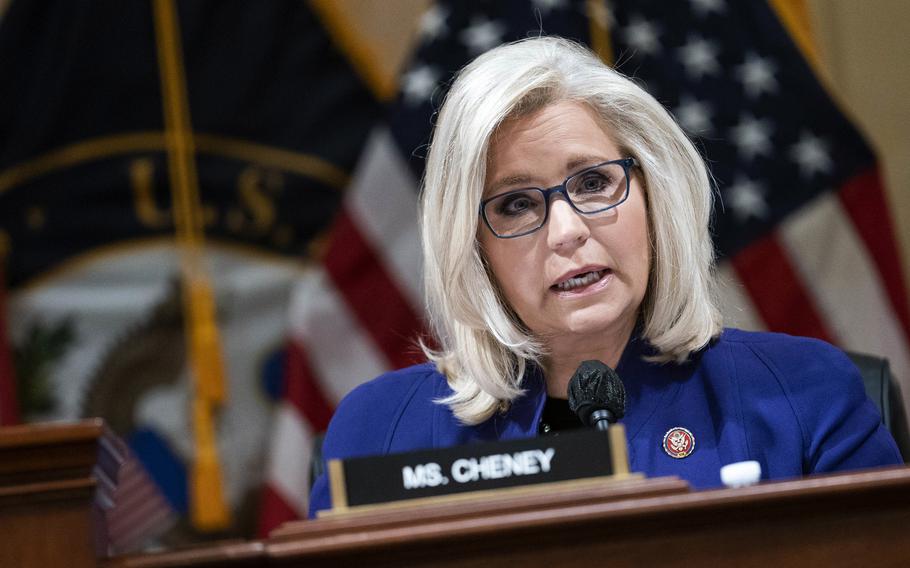 Rep. Liz Cheney, R-Wyo., speaks Oct. 19, 2021, during a meeting of the Select Committee to Investigate the Jan. 6 attack on the U.S. Capitol. (Sarah Silbiger/Bloomberg)

Donald Trump’s actions while his supporters stormed the U.S. Capitol show the former president is unfit for future office and could be held criminally responsible, said members of the House panel investigating the deadly 2021 riot.

Wyoming Rep. Liz Cheney, one of two Republicans on the bipartisan committee, described Trump’s “dereliction of duty” as he watched from the White House while events unfolded and resisted calls from his children and allies to intervene.

Democratic Rep. Bennie Thompson of Mississippi, who chairs the select committee, said the panel is looking at whether Trump’s actions were part of a broader plan and whether they merit criminal referral to the U.S. Justice Department.

Trump “demonstrated he’s at war with the rule of law, that he’s willing to blow through every guardrail of democracy,” Cheney said Sunday on CBS’s “Face the Nation.” “We’re in situation where people have got to understand the danger of President Trump.”

Those warnings are taking on greater urgency approaching Thursday, the one-year anniversary of the attack. Trump, 75, continues to repeat false claims about his 2020 electoral defeat, and has hinted at plans to run for the White House in 2024. The House committee’s final report is expected by the end of the year, potentially coinciding with midterm elections in November.

Thompson, on CNN’s “State of the Union,” warned that the threats to U.S. institutions haven’t subsided.

“We came perilously close to losing our democracy on Jan. 6,” Thompson said. “Had those insurrectionists been successful, we’re not sure what we would have had.”

Cheney, the House panel’s vice chair, said the committee is learning more about what transpired at the White House during more than two hours from the start of the siege to Trump’s eventual suggestion that his supporters leave the Capitol building.

In that time, the rioters reached the doors of the House chamber where a joint session of Congress, lead by then-Vice President Mike Pence, was certifying the results of the 2020 presidential election won by Democrat Joe Biden.

“Any man who would watch television as police officers were being beaten, as his supporters were invading the Capitol of the United States, is clearly unfit for future office,” Cheney said on ABC’s “This Week.”

Cheney, at the time the most senior female lawmaker in House Republican leadership, was one of 10 GOP House members who voted to impeach Trump for “incitement of insurrection.” The Republican caucus removed her from its leadership ranks in May.

While law enforcement has addressed some of the intelligence failures of Jan. 6, the biggest challenge is a staffing shortage after 130 officers retired or resigned following the capitol siege, Manger said.

The House committee is also investigating the role that sitting members of Congress played in helping to plan the Trump rally that ended with the attack on the Capitol. The panel has asked Ohio Rep. Jim Jordan and Pennsylvania Rep. Scott Perry to cooperate, and Thompson said on NBC’s “Meet the Press” that the committee “wouldn’t hesitate” to issue subpoenas.