1 in 3 Americans say violence against government can be justified, citing fears of political schism, pandemic 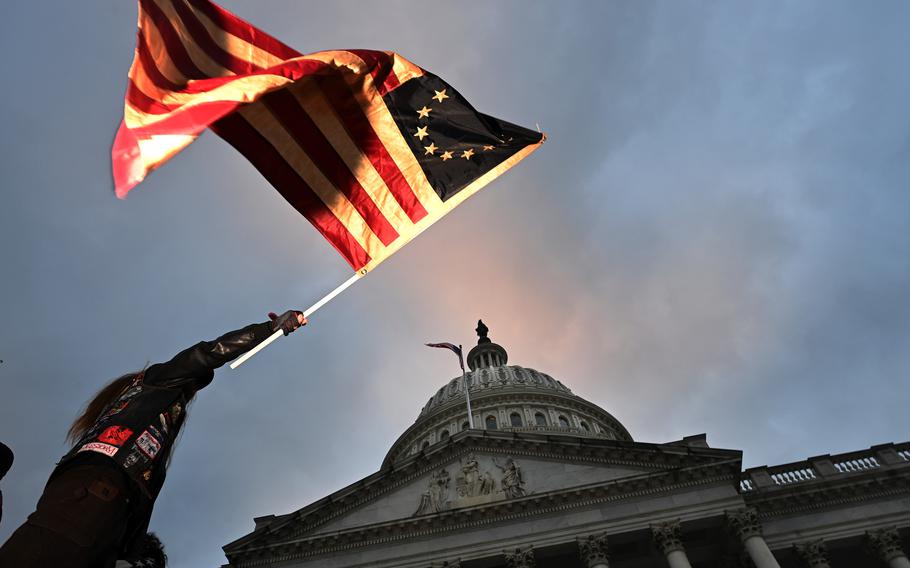 Supporters of President Donald Trump take over the grounds of the U.S. Capitol on Jan. 6, 2021. (Matt McClain/The Washington Post)

Phil Spampinato had never contemplated the question of whether violence against the government might be justified — at least not in the United States. But as he watched Republicans across the country move to reshape election laws in response to former president Donald Trump's false fraud claims, the part-time engineering consultant from Dover, Del., said he began thinking differently about "defending your way of life."

"Not too many years ago, I would have said that those conditions are not possible, and that no such violence is really ever appropriate," said Spampinato, 73, an independent.

The notion of legitimate violence against the government had also not occurred to Anthea Ward, a mother of two in Michigan, until the past year — prompted by her fear that President Joe Biden would go too far to force her and her family to get vaccinated against the coronavirus.

"The world we live in now is scary," said Ward, 32, a Republican. "I don't want to sound like a conspiracy theorist but sometimes it feels like a movie. It's no longer a war against Democrats and Republicans. It's a war between good and evil."

A year after a pro-Trump mob ransacked the Capitol in the worst attack on the home of Congress since it was burned by British forces in 1814, a Washington Post-University of Maryland poll finds that about 1 in 3 Americans say they believe violence against the government can at times be justified.

The findings represent the largest share to feel that way since the question has been asked in various polls in more than two decades. They offer a window into the country's psyche at a tumultuous period in American history, marked by last year's insurrection, the rise of Trump's election claims as an energizing force on the right, deepening fissures over the government's role in combating the pandemic, and mounting racial justice protests sparked by police killings of Black Americans.

A majority continue to say that violence against the government is never justified — but the 62% who hold that view is a new low point, and a stark difference from the 1990s, when as many as 90% said violence was never justified.

While a 2015 survey found no significant partisan divide when it comes to the question of justified violence against the government, the new poll identified a sharper rise on the right — with 40% of Republicans and 41% of independents saying it can be acceptable. The view was held by 23% of Democrats, the survey finds. 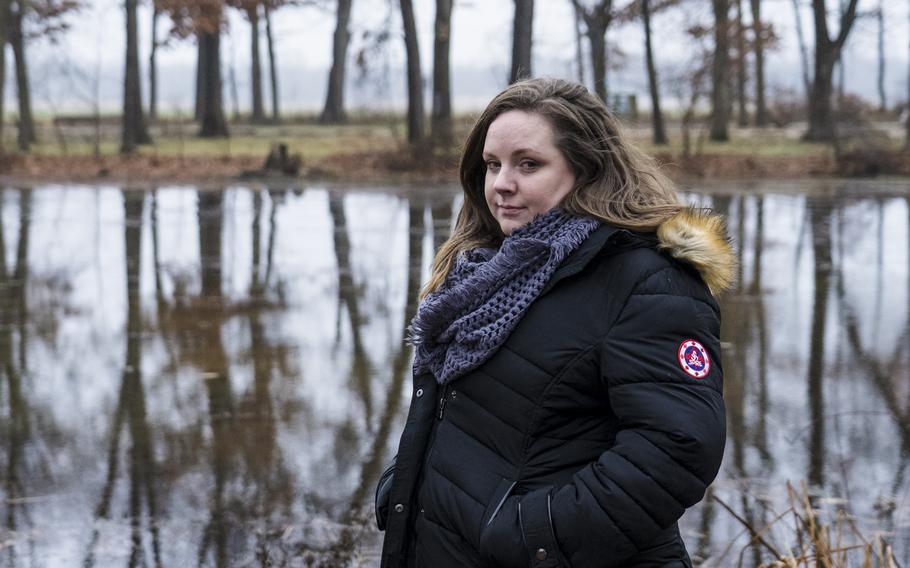 Anthea Ward, 32, a Republican mother of two in Michigan, had not thought about the notion of legitimate violence against the government until the past year. (Evan Cobb/For The Washington Post)

Acceptance of violence against the government was higher among men, younger adults and those with college degrees. There was also a racial gap, with 40% of White Americans saying such violence can be justified, compared with 18% of Black Americans.

People's reasoning for what they considered acceptable violence against the government varied, from what they considered to be overreaching coronavirus restrictions, to the disenfranchisement of minority voters, to the oppression of Americans. Responses to an open-ended question on the survey about hypothetical justifications included repeated mentions of "autocracy," "tyranny," "corruption" and a loss of freedoms.

The growth in the share of Americans willing to accept violence against the government identified by The Post-UMD poll may be partly due to methodology. Previous surveys were conducted by phone, while the new poll was largely conducted online, and studies have found respondents are more willing to voice socially undesirable opinions in self-administered surveys than when asked by an interviewer.

Recent surveys, though, have identified a similar trend, and subsequent interviews of some of the 1,101 respondents who participated in the Dec. 17-19 Post-UMD poll found that the events of the past two years have prompted people to reconsider their views. (The new poll has a margin of error of plus or minus four percentage points.)

It wasn't until Jan. 6 that 75-year-old Beverly Lucas considered the fact that people could attempt to violently attack the government. Lucas, who voted for Trump and identifies as a Republican, said she was horrified watching the images of people clad in "Make America Great Again" apparel storming the Capitol, assaulting police officers who were guarding the building.

"That never should have happened in this country," she said. "It's a sobering idea that elected representatives should fear for their lives because of a mob."

Still, Lucas said she had not ruled out the possibility that she would agree with violence if there was no available nonviolent alternative, referencing the Revolutionary War.

"When in the course of human events the government no longer represents the people, and there is no recourse, then it might be time," she said.

"I don't think that will ever happen," she added. 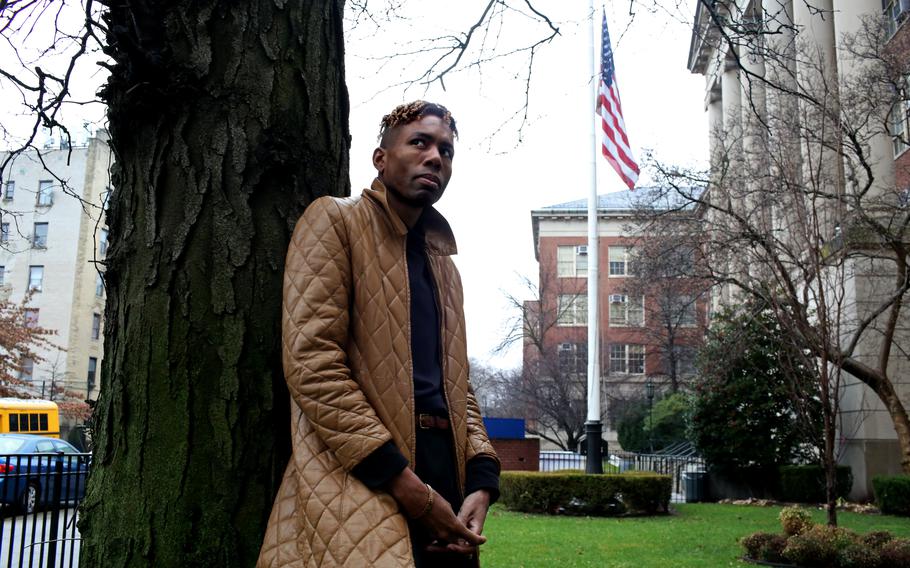 Rob Redding, 45, a New York political independent, said he has considered arming himself to protect his loved ones. (Yana Paskova/For The Washington Post)

The Capitol attack also set off alarms for Rob Redding, 45, a New York political independent who has been a talk-show host and runs a website focused on Black-oriented news. He said he has since considered arming himself to protect his loved ones.

The insurrectionists, he said, were attempting to "subvert American democracy because now it's becoming equal for all people."

"We are in a state where we're going to have to arm ourselves, absolutely," Redding said. "I'm a Black man in America. . . . I believe in protecting myself."

Redding added that he doesn't believe in breaking laws "unless laws are unjust." "To sit up here and say that I support violence against our government, I don't. I support government being level and equal for all people."

Taylor Atkins, 29, who lives in Atlanta and works in health-care administration, said she "absolutely" believes it is justifiable to take arms against the government in situations where those in power use their positions to oppress Americans, particularly those of ostracized identities.

Atkins, a Democrat, described the Jan. 6 riot as "insane," saying "there wasn't a need for violent outrage just because the president that you wanted to didn't win."

But, she added: "For people of color — I'm Black — we're actually losing our lives. We're actually fighting over if my life is valuable."

A new mom, Atkins said she didn't join Black Lives Matter protests during the summer of 2020 because she had a baby back home. She also said she doesn't support looting — but often, she noted, that's the only way demonstrators can get attention.

Atkins said she has considered arming herself for her own "protection," especially as the pandemic continues heightening tensions between civilians and the government. She pointed to clashes in Europe last year, where thousands of civilians protesting coronavirus measures fought police across the continent.

"I feel like that's justified because, obviously, we do all care about each other . . . but everybody has the right to be a person and be free and make their own decisions," she said. "As long as they're not truly impacting somebody else, as far as they have covid and are not going to the store and actually coughing on somebody, they should be allowed to leave their house."

Ward, the Michigan mother of two and self-employed housekeeper, said she would not participate in violence that she anticipates could come in her lifetime if the government imposes stricter rules such as an expansive vaccine mandate. She said she believes other people could be justified to "express their Second Amendment right" if the government infringes their freedom of choice and nonviolent action such as protests were unsuccessful.

Despite voting for Trump, Ward and other Republicans expressed disappointment with the insurrection on Jan. 6, saying they did not believe rioters had justification to commit violence.

Many respondents, particularly Republicans, cited the hardening battle lines over public health measures — and how far the government might go to combat the coronavirus - as a factor in their shifting views.

Don Whittington, 62, who lives in Prattville, Ala., and works in construction, said the pandemic has shown how easily it can be for some Americans to lose control over their freedoms, sparking angst among some groups, though he said he believes America is still far from a scenario that would push civilians to rebel against their government.

"What I can see across the country — there is going to come a point where people, both Democrat and Republican, are going to quit putting up with the things that are taking place," said Whittington, a Republican.

Still, Whittington, a devout Christian and a firearm owner, said he wouldn't be one to fight in a revolution.

"Because of my worldview, and because of my belief in God, I don't know that I would ever use a weapon against a government or anybody else," he said.

Matthew Wood, 37, a call center operator in Nampa, Idaho, said he has gotten more involved in local politics since the start of the pandemic, demanding fewer restrictions. If officials won't listen to people like him, he said, violence would be acceptable as a last resort. "If governments aren't willing to work and make changes, then so be it," said Wood, a Republican.

Tomasz Antoszczak, a 39-year-old Democrat from New Jersey, said he did not believe justified violence could happen any time soon, stressing that such action would be "a very last resort." But he said that the last administration's attempts to overturn the results of the election could have gone differently, potentially tipping the scales.

"With last year's insurrection, if things had gone in a different direction for some reason, and if the folks who stormed the Capitol were successful, and if the election was overturned and the results were overturned, and if Trump would have stayed in power," Antoszczak said. "That's just a lot of ifs."

Antoszczak expressed concern about the lawmakers he said "caved in" to the demands of the last administration.

"The last couple of years definitely opened my eyes a little bit more as to how fragile our government can be," he said.

James Lee, a Democrat in Florida, argued that American democracy was built on negotiation based on conflict, meaning that it took the Revolutionary War to achieve the political system the country has now.

"Whenever you lose that negotiation factor or the democracy itself, then, yeah, violence is going to have to be used in order to reestablish the democracy that we have," he said.

Still, Lee said he wouldn't be one to fight a despotic government.

"If I have to resort to firearms, in my opinion, I've already lost the battle," he said.

The Washington Post's Scott Clement and Emily Guskin contributed to this report.