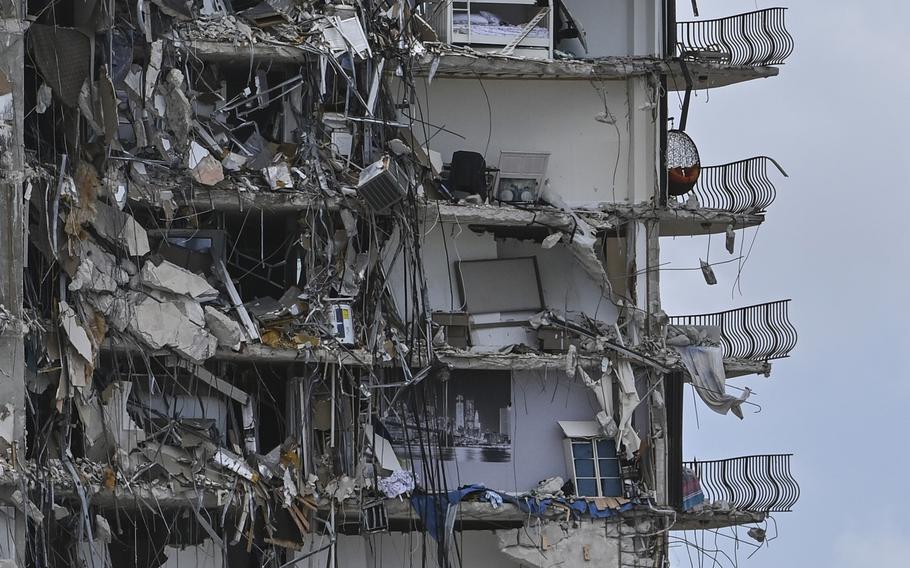 MIAMI — The night before Christmas was always the most joyful one of the year for Elena Blasser. Nochebuena — the good night — was all about family and food and music.

Blasser’s mother, Elena Chavez, would cook a huge pot of black beans. She made enough for 20 people, and the “Dos Elenas,” as they were called, would spend the day and most of the evening in celebration with their children and grandchildren in Miami.

“Eating, drinking, then more eating, just hanging out. Doing nothing, but doing everything, you know?” remembered Pablo Rodriguez, Blasser’s son. “The big thing was being together.”

Around midnight, Blasser would return to her condominium in Champlain Towers South in Surfside, Fla., about 30 miles away. Chavez often stayed there with her, and both would then be back at Rodriguez’s house early Christmas morning to start opening presents.

This year, Nochebuena comes amid the family’s ongoing grief. Christmas Eve marks six months since the condo tower collapsed in the predawn hours of June 24, killing the two women. Ninety-six others died with them.

“It was going to be difficult enough, but the fact that it’s the exact date makes it so much worse,” Rodriguez said recently. “It was my mom’s favorite holiday. She looked forward to it every year. This year it’s going to be excruciating.”

‘This was just so unnatural’

The awful, unique aspects of the disaster — one of the deadliest building failures in U.S. history — have made healing especially difficult, as have the ensuing investigations and lawsuits, families say.

“None of us knew exactly how to handle it,” said Rodriguez, who is struggling to help his 6-year-old son cope. “When I was younger, my grandfather died of a heart attack. My dad died of cancer. I can deal with that. It’s hard, but it’s part of life. This was just so unnatural that I was at a loss.”

Therapist Edith Shiro continues to counsel numerous people whose loved ones died. Some feel marginalized within the overall tragedy because their relatives had only been visiting Surfside by sheer happenstance on that summer night. All the contents of their lives were not obliterated. Since they didn’t own a unit, they didn’t suffer the same financial loss as other families.

“They feel they don’t have a voice, simply because there’s no name on a deed,” Shiro said. “They feel a little like they’re in the shadows.”

Chana Wasserman lives in Surfside, not far from the apartment her parents, Tzvia and Ingrid Ainsworth, had been renting since January. They were on the 11th floor, with a balcony where her mother, “Itty,” liked to watch the sunrise.

What’s left is now a gaping pit in the ground.

Time and again since late June, she and her siblings have gathered for events and felt “a huge space” at the table because of their parents’ absence.

The site where the 136-unit building once stood was cleared months ago of masses of broken concrete and pulverized debris. The attorneys acting as receivers in the main lawsuit against the condominium association are paying $100,000 a month to “protect and preserve” the property. More than half of that goes to “dewater” it and keep rain and tidal water from flooding what once was an underground garage. Miami-Dade County Circuit Judge Michael A. Hanzman is encouraging the receivers to sell the land as quickly as possible so condo owners can be compensated. The only potential buyer to date is Dubai-based Damac Properties, led by billionaire developer Hussain Sajwani, a business partner of former president Donald Trump. His offer of $120 million is well below the $150 million that Hanzman has set as the minimum families should get.

Even half a year later, the cause of the collapse remains unknown. A local grand jury released a report of its investigation last week and made 40 recommendations. It called for building recertifications every decade —Champlain Towers was about to undergo its 40-year recertification when the south structure collapsed — and for requiring condo associations to document annually that regular and routine maintenance is being done.

“We cannot let this happen again!” the report states.

Maria Iliana Monteagudo is one of the survivors. Yet her harrowing escape — rushing six floors down a dark stairwell as walls groaned and cracked — haunts her still. She now rents an apartment a few miles away. It is on the 16th floor, “and I pray every time I go into the elevator,” she said.

She had invested almost everything she had in her condo, moving in late last December. That didn’t leave time to decorate for the holiday as she usually would.

“It’s my favorite time of the year. My birthday is December 3rd, and my gift to myself is to have the house ready to receive baby Jesus,” she said. “But I lost everything. Photos of my children, my wedding. I left with nothing but the clothes I was wearing and my purse.”

Some of her new neighbors have invited her over for Christmas, but she is unsure whether she’ll go. Like Blasser and Chavez, Monteagudo always celebrated the night before with food and family.

“I have no heart or desire to decorate or cook or do anything. I don’t know when that feeling will leave me,” she said. “There is no joy.”

Rodriguez and his wife will try to make their celebration as normal as possible for son JP, who was close to his grandmother and great-grandmother. The family will see other relatives, eat cherished foods, open gifts.

And they’ll play traditional Christmas music, including his mother’s favorite - a lively, upbeat, 11-minute song called “Medley Navideño” by Trulla Express that is popular in Puerto Rico. Blasser was raised there after she and her mother fled Cuba in 1959.

“It’s a long song, but she would have so much fun with it, especially on the 24th,” Rodriguez said. “I heard it playing the other day when I was out, and it stopped me in my tracks. Everything just hit me, all over again.”