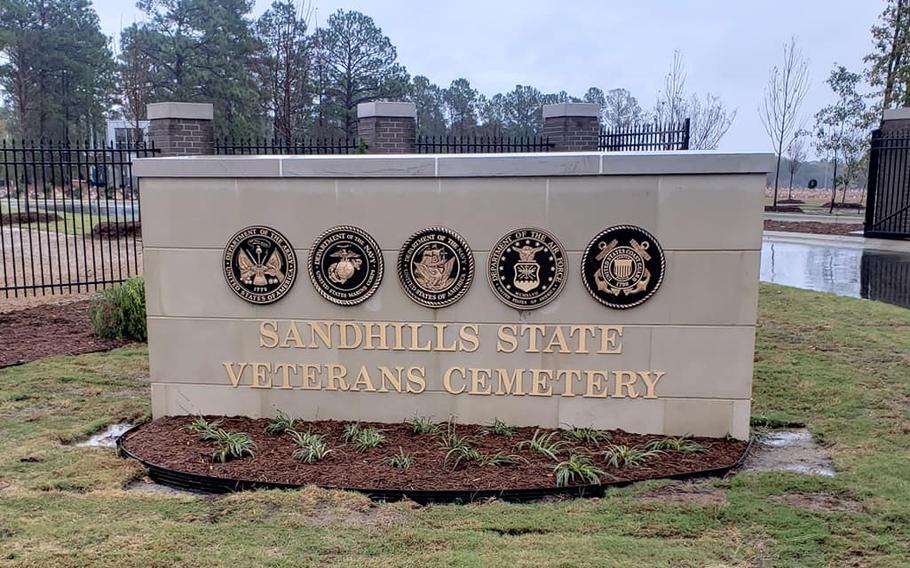 (Tribune News Service) — The daughter of a 20-year Army veteran is upset that personal items left at her father’s gravesite and the graves of others were thrown away without notice.

Caroline Fuentes’ father has been buried at Sandhills State Veterans Cemetery since 2015.

The cemetery is right outside of Fort Bragg’s Spring Lake gate.

During the past six years, Fuentes said, the family has placed Christmas items at her father’s grave during the holiday season without any issues.

“This is the first year since my father passed away that you threw away personal items that were allowed and written in your handbook,” Fuentes wrote to administrators of the cemetery. “This was very disheartening that you could be so cruel especially during one of the hardest times of the year.”

Jonathan Pratt, superintendent of Sandhills State Veterans Cemetery, said Wednesday the items were gathered up to remove trip hazards during a Wreaths Across America ceremony held Saturday at the cemetery. He indicated the items were discarded.

“It wasn’t that we were trying to be overzealous,” Pratt said. “Every week, we take up flowers to prepare for the grounds, and that’s part of our policy.”

According to the North Carolina Veteran’s Cemetery policy, artificial flowers and potted plants are permitted at the graves and at the columbarium from Nov. 1 through April 1, and four days before and four days after Valentine’s Day, Easter, Mother’s Day, Memorial Day, Father’s Day, July 4 and the veteran’s or spouse’s birthday or date of death.

“They will also be removed by cemetery staff when they become unsightly or when it becomes necessary to facilitate cemetery operation,” the policy states.

The policy says that “Christmas wreaths, grave blankets and other seasonal adornments may be placed on graves and at the columbarium” from Dec. 1 through Jan. 5.

Breakable objects, vigil lights, statues and placing coins on headstones are among the items not allowed.

Pratt said the policy is consistent with the National Cemetery Administration “and there’s no other way to administer those policies without being consistent.”

Fuentes thinks the floral arrangement she placed at her father’s grave this year is consistent with the policy.

The arrangement, Fuentes said, was made with artificial poinsettias and placed on the grave Dec. 13. It was still there when her brother visited Dec. 15.

Fuentes said she learned the items were gone when her husband attended Saturday’s wreath ceremony and took a photo of her father’s headstone and the cemetery.

Fuentes said her items and flowers, mini trees and the personal items of other family members were trashed.

“There was not a single flower, Christmas tree or arrangement, when there were tons of things out days before Wednesday,” Fuentes said.

She estimated “thousands of dollars” worth of mementoes were thrown away.

Retired Command Sgt. Maj. Harry Bennett said he thinks the policy has always been a bad one.

Bennett said countless floral arrangements at Allison’s grave have been removed or damaged, as he visits the site once a week.

He said he’s reached out to cemetery management and to the North Carolina Department of Military and Veterans Affairs in the past with concerns to no avail.

An example of an inconsistent implementation of the policy, he said, is that he saw a tree in a heavy pot sit at a site for at least a week this year or flowers have been removed from Allison’s grave based on what he called an inconsistent mowing schedule.

Bennett said the policy is also not clear on how many Christmas items are allowed at a gravesite.

Allison, who died when she was 20, loved Christmas and holidays, her father said, which is why he placed a cemetery tree with blank ornaments at her gravesite so those visiting Allison could write personalized messages for her.

The tree was removed ahead of this year’s Wreaths Across America event.

“I wasn’t really surprised, but I was further disappointed when my wife called and said, ‘It’s gone,” Bennett said.

Though the policy states that “damaged, faded or otherwise unsightly” items will be disposed of, it states that removed artificial flowers and decorations “will be placed in an inconspicuous holding area for one month prior to disposal.”

Bennett said shortly after his daughter was buried, the cemetery manager then would call to let him know that visitors were leaving candles and extra items at her site, which he said he’s willing to pick up.

Items used to be stored in an old storage shed, but he said his wife saw piles of Christmas items and overflowing dumpster bins Saturday.

He and Fuentes said dozens of families have voiced frustrations on social media and posted pictures of discarded, trashed items.

“It’s just disappointing and I feel bad for the folks who this is their first time seeing it,” Bennett said.

“There were probably thousands of dollars’ worth of decorations thrown away — but forget the money and consider what it does to people emotionally.”

Fuentes said she suspects the items were removed to “impress the bigwigs” who attended the wreath ceremony.

She questioned why family members couldn’t at least have been given the opportunity to retrieve the items.

Bennett said when he spoke with North Carolina Department of Military and Veterans Affairs representatives attending the Wreaths Across America ceremony, the policy was again cited but he does not think a resolution was offered.

“It’s not about the (cemetery) workers,” he said. “The cemetery’s mission and vision are the veterans that rest there, the family members that rest there and their survivors.”

Pratt the said policy allows him the discretion to remove items for grounds work, which was one he made ahead of the wreath event to maintain the military cemetery for an event that ensured uniform wreaths are placed on most graves.

“What would you do if you had 9,000 graves and thousands of people put flowers out there? ... You have to make some type of a decision, and I did so there was no liability,” he said.

Bennett said he’s suggested cemetery officials hold town hall meetings to communicate when there will be projects or mowing, if wildlife is eating floral arrangements or if items will be removed ahead of impending storms.

That way, Bennet said, family members have time to remove items or to know they shouldn’t place new items at the sites.

He questions if notices will be given to families ahead of next year’s Wreaths Across America event.

Pratt said that with more than 9,000 graves in the cemetery and “thousands of items” left each week, it is not possible to call all family members to give notice that items will be removed.

About four years ago, he said, the cemetery’s condition was called into question, which is why the policy is enforced.

During an Oct. 13 inspection this year, he said, the cemetery “did well” and attributes increased internments being tied to the cemetery’s maintenance.

The policy is posted and conveyed to families, Pratt said.

“All I can do is make the place look good, make it acceptable for internment here and respect all the branches,” he said. “And that’s what we do.”

Bennett said that as a prior member of the local Wreaths Across America board, he didn’t want his frustrations to stop support for the organization or veterans buried in the cemetery, but he also questions if the length of time the wreaths are left at the sites are in line with the cemetery’s policies.

Fuentes said she’s glad her mother was unable to attend this year’s ceremony to see that the items were removed.

While she is expressing frustration on behalf of her own family, Fuentes said she’s also concerned that elderly widows and widowers don’t have local family advocates and will be disappointed to see items at their loved one’s graves gone.

“To discard personal possessions this time of year is not the right thing to do,” she said.

Visit The Fayetteville Observer at www.fayobserver.com