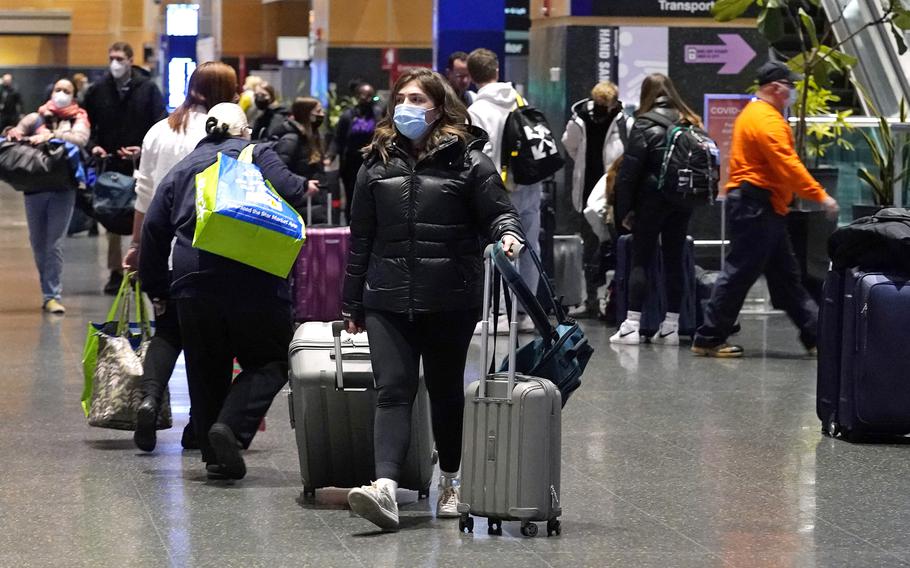 Travelers trek through Terminal E at Logan Airport, Tuesday, Dec. 21, 2021, in Boston. At least three major airlines say they have canceled dozens of flights, Friday, Dec. 24, because illnesses largely tied to the omicron variant of COVID-19 have taken a toll on flight crew numbers during the busy holiday travel season. (Charles Krupa/AP)

NEW YORK — Airlines canceled hundreds of flights as the omicron variant jumbled schedules and drew down staffing levels at some carriers during the busy holiday travel season.

Delta Air Lines and United Airlines said they canceled flights because of staff shortages tied to the omicron variant. Delta canceled 145 flights on Friday and 111 for Christmas Day, according to FlightAware. (Other factors, such as weather, are also causing cancellations.) United called off 175 flights on Friday and 69 on Saturday.

Not all airlines said COVID was disrupting their travel schedules. American Airlines said it had "nothing to report," while Southwest Airlines said "things are running smoothly." JetBlue did not respond to a request for comment.

Flight delays and cancellations tied to staffing shortages have been a regular problem for the U.S. airline industry this year. Airlines encouraged workers to quit in 2020, when air travel collapsed, and were caught short-staffed this year as travel recovered.

"The nationwide spike in omicron cases this week has had a direct impact on our flight crews and the people who run our operation," United said in a statement. "As a result, we've unfortunately had to cancel some flights and are notifying impacted customers in advance of them coming to the airport."

Delta said it canceled flights Friday because of the impact of omicron and possibility of bad weather after it had "exhausted all options and resources — including rerouting and substitutions of aircraft and crews to cover scheduled flying."

The airlines both said they were trying to rebook passengers.

While some travelers canceled holiday plans because of rising case numbers, many others kept to their vacations during some of the year's busiest travel days. The Transportation Security Administration said it expects to screen nearly 30 million people from Dec. 20 through Jan. 3, compared with nearly 44 million during the last holiday season before the pandemic.

Germany-based Lufthansa said Friday that it was canceling a dozen long-haul transatlantic flights over the Christmas holiday period because of a "massive rise" in sick leave among pilots. The cancellations on flights to Houston, Boston and Washington come despite a "large buffer" of additional staff for the period. The airline says it couldn't speculate on whether COVID-19 infections or quarantines were responsible because it was not informed about the sort of illness. Passengers were booked on other flights.

According to FlightAware, there are nearly 3,400 canceled flights on Friday and Saturday, with at least half of the cancellations by Chinese airlines. About 20% of affected flights — 745 — were to, from or within the U.S. This is a small fraction of global flights. FlightAware says it has tracked more than 120,000 arrivals in the past 24 hours.

Coronavirus infections fueled by the new variant have also squeezed staffing at hospitals, police departments, supermarkets and other critical operations that have struggled to maintain a full contingent of front-line workers.

To ease staffing shortages, countries including Spain and the U.K. have reduced the length of COVID-19 quarantines by letting people return to work sooner after testing positive or being exposed to the virus.

Delta CEO Ed Bastian was among those who have called on the Biden administration to take similar steps or risk further disruptions in air travel. On Thursday, the U.S. shortened COVID-19 isolation rules for health care workers only.