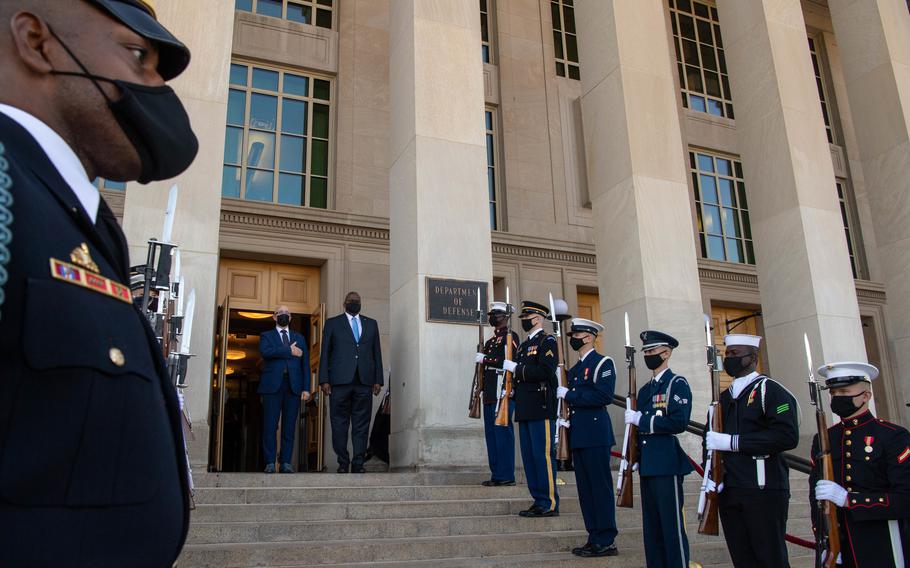 Defense Secretary Lloyd Austin and Ukraine Minister of Defense Oleksii Reznikov render honors during each respective countries’ national anthems prior to a bilateral exchange at the Pentagon on Nov. 16, 2021. (Jackie Sanders/U.S. Air Force)

The weapons are the last portion of a $60 million security-assistance package announced Sept. 1 meant to help Ukraine “more effectively defend itself against Russian aggression,” the White House said at the time.

That package also included other lethal and nonlethal capabilities, including Javelin anti-tank missile systems, patrol boats and “more benign articles” such as medical assistance, Kirby told reporters at the Pentagon.

The delivery comes as U.S. intelligence has indicated Russian President Vladimir Putin is poised to deploy as many as 175,000 Russian troops to the Ukrainian border by early 2022, according to news reports. So far, Russia has massed about 70,000 troops near its border with Ukraine.

Since 2014, the U.S. has contributed $2.5 billion in support of Ukrainian forces, including $400 million this year, according to the White House.

The U.S. instructed Ukraine not to use the weapons offensively, “but there is no geographical restriction on where they can be used,” Kirby said. “We expect them to use them responsibly and for the purposes of self-defense.”

Another $300 million for the Ukraine Security Assistance Initiative is included in the 2022 National Defense Authorization Act, which sets policy priorities and directs spending for the Defense Department. The House passed the NDAA on Tuesday. The Senate has yet to vote on the bill.

The proposed NDAA also provides about $4 billion for the European Deterrence Initiative, the U.S.-led efforts in Europe to deter Russian aggression, which includes major training exercises and troop rotations in Eastern Europe.

Kirby did not say what kind of weapons could be provided should the bill become law, but he said it could depend on the specifics included in the NDAA.

“Some of that could be decided by the legislation itself,” he said. “All I can tell you is that this administration has been willing to provide security systems items to Ukraine that actually really does help them defend themselves.”

Still, the Pentagon continues to support a diplomatic resolution to the tensions, Kirby said.

President Joe Biden said Wednesday that he has no plans to send U.S. troops to "confront Russia invading Ukraine" at this point.

He declined to say how many U.S. troops are now in Ukraine, citing operational security concerns.

“Training with our Ukrainian partners cultivates trust, fortifies readiness, and develops relationships, which in turn promotes peace and stability throughout Europe,” Semelroth said. “Our ongoing training and support are designed to strengthen relationships and affirm US commitment to the success of a stable and free Ukraine.”

Biden on Tuesday spoke via teleconference with Putin for two hours, during which Biden “made clear that the U.S. and our allies would respond with strong economic and other measures in the event of military escalation,” according to the White House.

“President Biden reiterated his support for Ukraine’s sovereignty and territorial integrity and called for de-escalation and a return to diplomacy,” the White House said Tuesday.