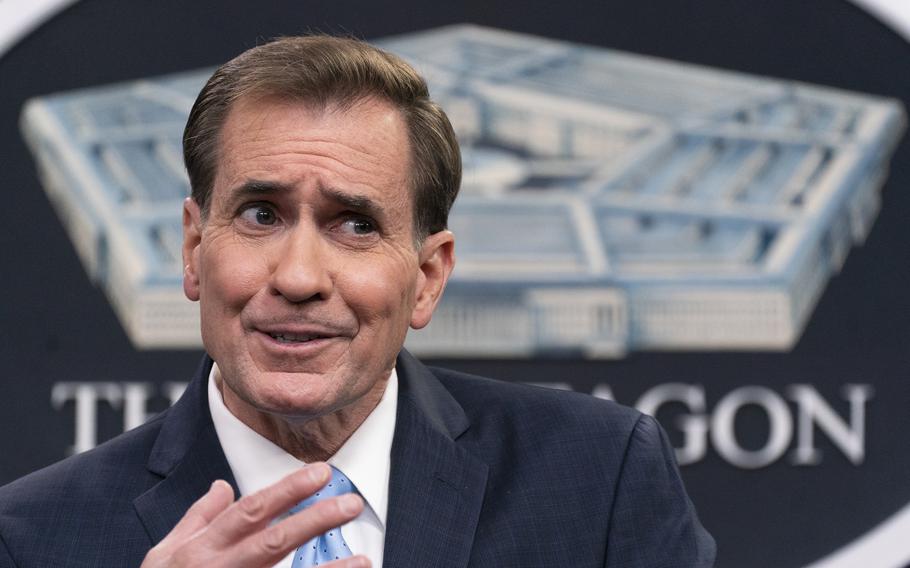 Defense Secretary Lloyd Austin on Monday tapped an Army four-star general to probe a 2019 U.S. airstrike in Syria and review previous military investigations into the incident that killed civilians and Islamic State fighters mounting their last stand in that country.

Gen. Michael Garrett, the commander of U.S. Army Forces Command at Fort Bragg, N.C., was charged with examining the March 18, 2019, airstrike near the town of Baghouz, said John Kirby, the Pentagon’s top spokesman. Garrett will determine whether the strike was legal, whether proper procedures were followed before and after the bombing, and whether initial reviews of the incident were properly conducted.

The selection of a four-star general to lead the new inquiry was a “reflection of how seriously [Austin] has taken the issue,” Kirby said.

“He wants to make sure that that we do a proper review and inquiry of the original incident and the investigations that followed it,” Kirby told reporters Monday at the Pentagon. ‘If there are changes to procedures, authorities, if there is needed accountability — he wanted an officer at that senior level to be able to make those calls.”

Garrett will have 90 days to provide Austin a report on his findings, Kirby said.

At the time of the strike, Garrett was serving as FORSCOM commander, which puts him in charge of training and preparing most of the Army’s fighting forces. That job keeps him far from any battlefield decision-making. Kirby said such separation should allow the general to conduct a “dispassionate review” of the case.

Austin was briefed earlier this month on the 2019 airstrike after a New York Times investigation alleged military officials quickly determined the strike had killed civilians, including women and children, and some worked to “delay or sanitize” subsequent investigations into the incident.

U.S. Central Command said U.S. special operators and American-backed anti-ISIS fighters called in the strike on the final stronghold for ISIS along the Syria-Iraq border in the final days of the terrorist group’s war in those two countries. U.S. F-15E Strike Eagle fighter jets dropped three 500-pound bombs in the area, CENTCOM officials said this month, acknowledging the strike for the first time. CENTCOM said at least 16 ISIS fighters and four civilians were among more than 60 killed in the attacks. The U.S. military was “unable to conclusively characterize” the more than 40 remaining people killed, which CENTCOM said included “armed women” and at least one armed child.

CENTCOM defended the attack as "legitimate self-defense strikes” in support of anti-ISIS fighters.

The New York Times first revealed the strike had occurred and “dozens of civilians” were killed in a Nov. 13 report. It described the incident as “one of the largest civilian casualty incidents of the war against the Islamic State.” The newspaper also reported the incident was flagged internally as a “possible war crime,” but other military officials downplayed the death toll and hampered internal investigations into the incident.

Kirby on Monday did not provide new details about the strike. He said Austin decided to further probe the incident after his pre-Thanksgiving classified briefing on the incident from Marine Gen. Frank McKenzie, who leads U.S. Central Command. McKenzie was in that position at the time of the strike. Austin, a former Army four-star general, was the CENTCOM commander when the United States began its war against ISIS.

The review follows an investigation concluded earlier this month that found no misconduct in an Aug. 29 drone strike in Kabul, Afghanistan that killed 10 civilians. Austin ordered a review of that strike after news reports indicated the United States had killed an Afghan aid worker in the attack, and not an ISIS-affiliated suicide bomber. The attack — the final U.S. strike in its 20-year war in Afghanistan — also killed seven children.

That review, led by an Air Force three-star general, determined “execution errors” committed as American drone operators hunted for an expected car bomber led to a “tragic mistake,” but did not amount to a law of war violation.

The Pentagon is considering new steps to mitigate civilian casualties in airstrikes around the world in the wake of that Afghanistan bombing, officials have said.