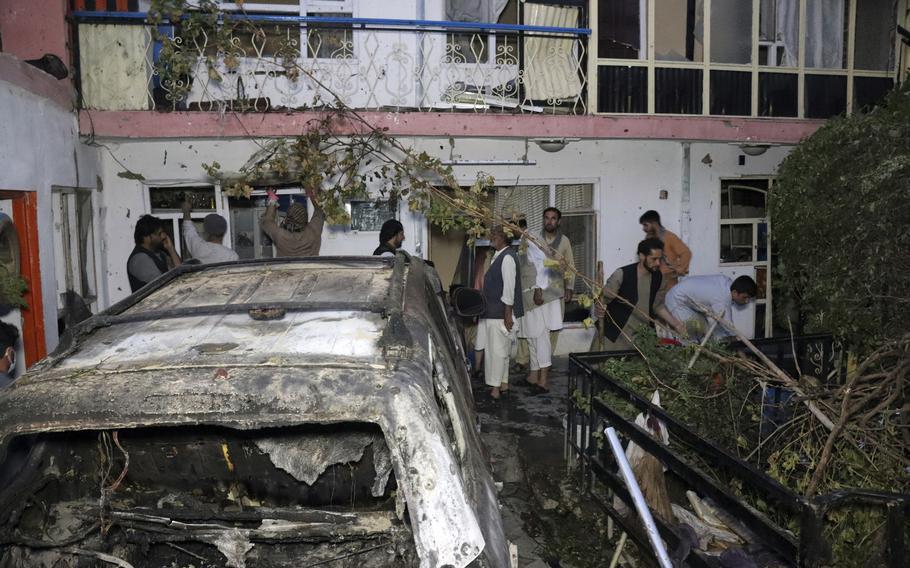 Said, the Air Force inspector general, said his review of the airstrike revealed no criminal wrongdoing, instead calling it “an honest mistake.” Operators believed they were targeting a car with Islamic State fighters and explosives when they launched the attack, but further investigation revealed it was a civilian vehicle with packages.

“I found given the information they had, the analysis that they did — I understand they reached the wrong conclusions — but … was it reasonable to conclude what they concluded based on what they had? It was not unreasonable,” Said said.

Said was ordered in September to review the drone strike investigation that revealed three men and seven children were killed in the attack that took place three days after 13 American troops died in an Islamic State attack at the Hamid Karzai International Airport in Kabul.

U.S. and coalition troops were there evacuating Americans and Afghans from the country in the final days of the U.S. military’s involvement in Afghanistan.

“The issue here is to figure out what we could have done better to make sure this never happens again,” Said said. “I never found an instance where somebody is I asked a question of ‘Why did you decide that?’ and I got crickets or I got an illogical answer.”

Said told reporters Wednesday at the Pentagon that his investigation discovered “execution errors combined with confirmation bias and communication breakdowns that regrettably led to civilian casualties.”

Confirmation bias happens when a person interprets a series of intelligence reports or other information in a way that supports one assumption without considering alternate theories, Said said.

“You can interpret the intelligence in a way that leads you to further believe that this is the vehicle of interest, but you can also interpret it as benign,” Said said.

To address the issues, the classified report made three recommendations to prevent similar mistakes in the future.

The report recommended implementing strike cell procedures to mitigate the risk of confirmation bias and sharing situational-awareness information more broadly across the strike cell and with supporting elements operating elsewhere.

“[It] will provide better insight and better cross-check of what exactly are we looking at? What are we seeing what else could it be? Are we interpreting the intelligence in an appropriate way or not?” Said said.

The general said the timing of the attack on U.S. forces caused airstrike operators to be on high alert for potential threats, contributing to a confirmation bias that led to the military accidentally targeting the civilians.

“With the attack that happened three days prior ... you can imagine the stress on the force is high and the risk to force is high, and not appreciating [the incident] through that lens, I think would be inappropriate,” Said said.

The report also recommended a review of how strike cells assess the presence of civilians in strike zones after the investigation found that a child was visible in video of the targeted Kabul compound two minutes before U.S. operators launched the airstrike, Said said.

Said and his investigators were able to see the child in the strike zone’s video feed two minutes before the strike was launched, but the child was “100% not obvious” and went unnoticed by strike operators.

“The physical evidence of a child was apparent about the two-minute point, but I'm just telling you ... you have to be like, no kidding looking for it,” Said said.

The target was a white Toyota Corolla about 1.5 miles from the airport that strike operators believed was filled with packages containing explosives. U.S. officials in the hours after the attack said secondary explosions after the airstrike indicated that intelligence was correct but Said said further technical analysis concluded they could have been propane tanks, not bombs.

Said said the report details other correlations the civilian car has with the ISIS Corolla that made it “reasonable to conclude that that should be a vehicle of interest,” but he could not provide further information because the report is classified. The actual Corolla associated with the terrorists was never found.

Said said he "didn't find violations of law or the law of war," but the report will be sent to the chain of command to decide whether anyone should be held accountable for the strike.