All the big deadlines facing Congress this holiday season 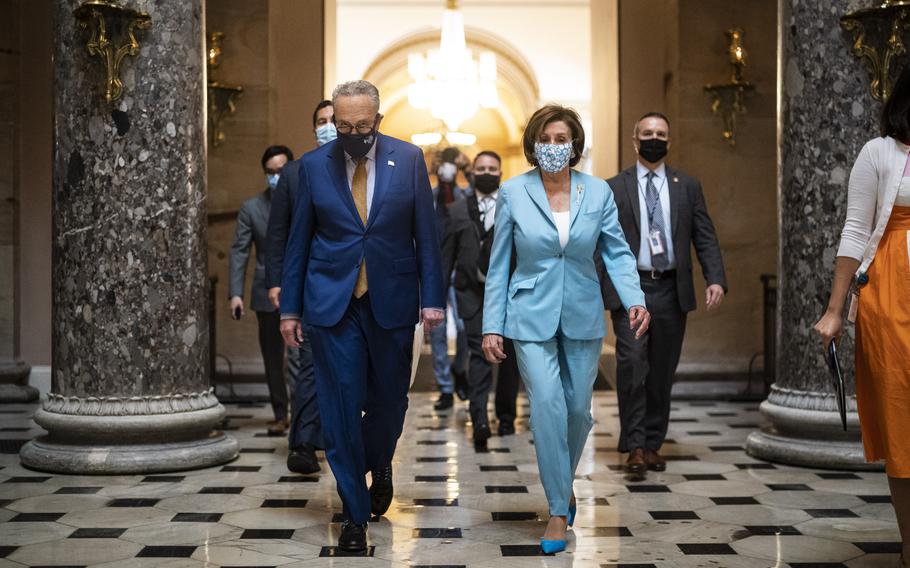 Congress is planning to be out of town all next week for Thanksgiving. Which means when it returns, it will have just a couple of days to solve some big fiscal problems. (Jabin Botsford/The Washington Post)

This week, President Joe Biden is celebrating a bipartisan investment in infrastructure spending. But as Democrats in Congress try to pass even more of his agenda, some very big problems could present themselves.

There's more left on Congress's to-do list than ticked off it, and if Democrats in Congress aren't careful, they could face a potential government shutdown, default on U.S. debt or both.

Congress is planning to be out of town all next week for Thanksgiving. Which means when it returns, it will have just a couple of days to solve some big fiscal problems. Such as:

By Dec. 3, the government runs out of money again for its operations.

A reminder of how we got here: Congress is supposed to fund the government each year by Oct. 1, which is when a new fiscal year starts. It didn't do that this fall. (Congress rarely makes this deadline these days.) Instead, it funded the government at last year's levels through Dec. 3, hoping lawmakers would have full funding bills done by then.

Well, it's almost Dec. 3, and it won't meet that deadline — which means it will probably have to pass another short-term spending bill (known as a "continuing resolution").

There's no reason to suspect this will lead to a shutdown, though. Congress rather easily avoided it this fall. But any one lawmaker in the Senate wanting to prove a point strongly enough can at least temporarily shut down the government; it's happened before.

— Raise the debt ceiling and avoid a default

Also sometime in December, the Treasury Department could run out of money to pay its debts if Congress doesn't pass a law suspending the debt ceiling. (There's a law that says that every time the Treasury Department runs up against the debt ceiling, it must come to Congress and ask to raise it.) If Congress can't get this done in time, the United States could default on its debts, causing economic catastrophe.

Raising the debt ceiling has become a huge partisan fight between Democrats and Republicans.

Senate Minority Leader Mitch McConnell, R-Ky., says he won't provide any Republican votes in the Senate to help Democrats lift the debt ceiling. He took the same hard line this fall and ended up providing a few Republican votes at the last minute.

But McConnell took a lot of heat from former president Donald Trump for that. So if he holds the line this time, it means Democrats' only path to do raise the debt ceiling is a complicated one using a budget process called reconciliation. It is more time-consuming, and it opens them up to other votes that could be politically problematic. ("Democrats vote to raise the debt by trillions of dollars!" is what Republican attack ads would no doubt say.)

There may be some wiggle room here on the date, since no one knows exactly when the Treasury Department will exhaust all its efforts to pay its bills — known as the "X" date.

The National Defense Authorization Act is part of a must-pass bill that Congress usually rushes to get done at the end of the year. It governs everything from pay raises for troops to how the military handles sexual assault allegations to — new this year — potentially requiring women to register for the draft.

This bill typically isn't controversial. (It's not politically smart to hold up a bill to give the military what it wants.) But it is time-consuming, and the bigger the legislation, the more chances for something to go wrong. Senate Majority Leader Charles E. Schumer, D-N.Y., has come under bipartisan criticism for taking so long to put this to a vote in the Senate.

Schumer said he is also planning to fold into the military policy legislation a bipartisan bill aimed at addressing supply chain issues and keeping the United States competitive with China.

— Pass the second half of Biden's agenda

This is technically not a need-to-do. But it is a must-do for Democrats, many of them believe, if they want to have a shot at keeping their majorities in Congress in next year's midterm elections.

We're talking about Democrats' massive, $1.75 trillion social spending bill, which aims to do so much that it's hard to sum up concisely: Democrats want to expand the social safety net by creating universal prekindergarten, expand aid for seniors using Medicare, and nearly everything in between. They also want to invest heavily in retrofitting U.S. buildings and public transportation to lower the nation's carbon emissions.

There's no deadline on this; Democrats would have loved this to be done months ago. Now, they would like it to pass both chambers and be on Biden's desk by the end of the year, before an election year begins and compromise becomes even more difficult. That may be optimistic, especially if these fiscal challenges get in the way.

— Do something — or not — on voting rights

A huge Democratic priority that hasn't gotten nearly as much attention — by Biden's own admission — is trying to pass a bill that protects voting rights before some in the party fear it's too late to save their Democratic majorities. The legislation would, among other things, mitigate Republican gerrymandering that could draw Democrats out of the majority in Congress for the better part of the decade.

Republicans in the Senate have blocked all voting rights bills, arguing that it's up to the states to decide how to run their elections. That means Democrats are stuck; they don't have the votes to get over a Republican filibuster. Unless they wanted to get rid of the filibuster.

Biden has said he's open to this. In a letter this week to fellow Senate Democrats, Schumer sounded like he was considering it, too: "Even if it means going at it alone, we will continue to fight for voting rights and work to find an alternative path forward to defend the most fundamental liberty we have as citizens."