WASHINGTON — President Joe Biden on Monday signed into law a sweeping $1.2 trillion infrastructure measure, notching an achievement that had long eluded his predecessor in the White House, Donald Trump.

Republicans and Democrats gathered at the White House on Monday as Biden signed the legislation, which is aimed at improving the country’s roads, bridges, pipes, ports and Internet connections.

Trump had repeatedly tried and failed to secure a bipartisan infrastructure deal.

“This is what can happen when Republicans and Democrats decide we’re going to work together to get something done,” Portman said.

Harris said the infrastructure push “will be a nationwide effort, the likes of which we have not seen in a generation.” She also urged lawmakers to pass the Build Back Better plan, a second package that aims to overhaul the country’s health-care, education, immigration, climate and tax laws. The House is expected to take up the measure this week.

Several Republicans, including Sens. Shelley Moore Capito of West Virginia, Bill Cassidy of Louisiana and Mitt Romney of Utah, and Rep. Tom Reed of New York were also in attendance.

The mood at the ceremony on the White House lawn was celebratory, with members of Congress expressing gratitude for the cooperation of those across the aisle — a rare occurrence.

Biden, who has often spoken longingly about the days of compromise and consensus, seemed in good spirits as he touted the benefits of the new law and the bipartisan manner in which it was achieved — with no mention of the vitriol that Trump and his supporters have lodged at the Republicans who voted for the infrastructure bill.

At one point, Biden praised Portman as a “hell of a good guy,” then quipped: “I’m not hurting you, Rob, because I know you’re not running again.”

Within moments of the signing, Republicans and Democrats issued news releases detailing the projects that will be built in their home states and districts. Collins, the Republican senator from Maine, said the bill would provide $225 million to her state for bridge construction, maintenance and repair.

The Senate first passed the infrastructure bill in August with a 69-30 vote, the rare type of partnership Biden committed to in the 2020 campaign. The measure languished in the House for months, though, as liberal lawmakers sought to use their leverage to advance Biden’s larger climate and social spending bill.

The bill finally passed the House earlier this month on a 228 to 206 vote, with 13 Republicans joining with most Democrats in voting yes.

Earlier Monday, White House press secretary Jen Psaki told reporters that Biden “invited everybody who supported it because he felt that was the right thing to do.”

“Whether people come or not, that’s their choice,” she said.

Some supporters of the measure, such as New York Gov. Kathy Hochul, D, traveled to Washington for the event.

Several House Republicans who backed the legislation have been threatened and harassed; last week, Rep. Fred Upton of Michigan released the audio of an expletive-filled phone call in which a man in South Carolina called him a “traitor” and said he hopes the congressman, his staff and his entire family die.

Other Republican lawmakers — most notably Trump loyalists Reps. Marjorie Taylor Greene of Georgia and Madison Cawthorn of North Carolina — have led criticism and attacks against their colleagues who backed the bill.

Greene, a House freshman who has previously accosted fellow members at the Capitol, said earlier this month that any House Republican who backed the measure would be “a traitor to our party, a traitor to their voters and a traitor to our donors.”

After the vote, Greene tweeted the names and phone numbers of 12 of the 13 Republicans who voted in favor of the bill, which she described as “Joe Biden’s Communist takeover of America.”

Senate Minority Leader Mitch McConnell, R-Ky., who voted for the bill and drew Trump’s wrath, has even tried to give more credit to his Senate caucus for helping pass the package.

McConnell, however, will not be attending Monday’s signing ceremony. He told a Kentucky radio station last week that he has “other things I’ve got to do.” 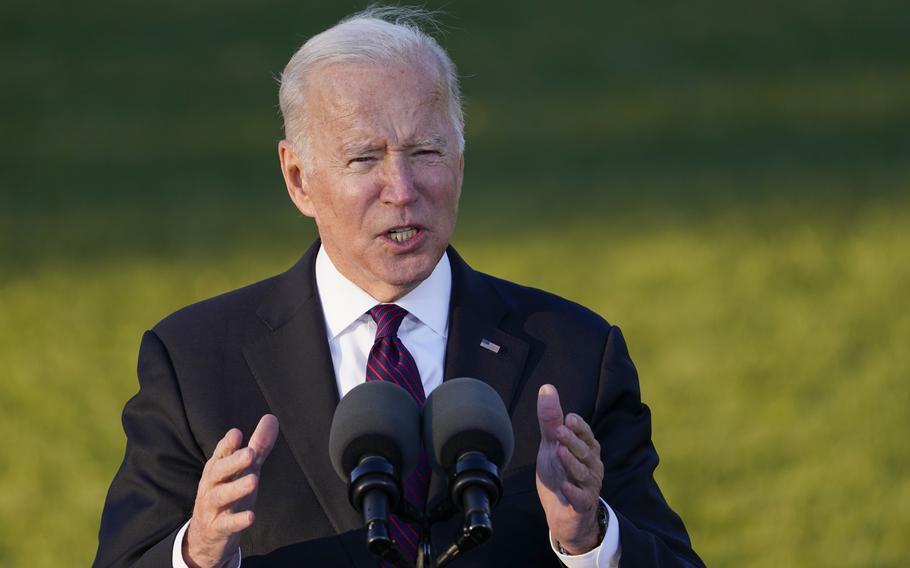 President Joe Biden speaks before signing the $1.2 trillion bipartisan infrastructure bill into law during a ceremony on the South Lawn of the White House in Washington, Monday, Nov. 15, 2021. (Susan Walsh/AP)