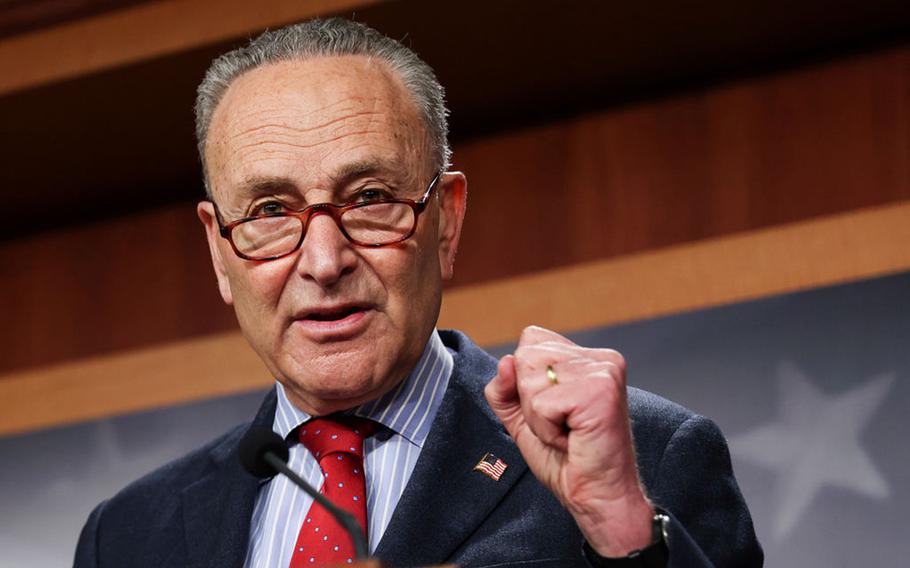 (Tribune News Service) — Senate Majority Leader Chuck Schumer is seeking to break a logjam on a $250 billion bill aimed at making the U.S. more competitive with China and easing a global shortage in microchips by attaching it to a must-pass Pentagon policy measure that could clear the chamber this week.

The China bill, which passed the Senate with bipartisan support in June but has languished in the House, would boost domestic semiconductor manufacturing with $52 billion in assistance and authorize another $190 billion for research and development at universities and other institutions and other priorities.

The semiconductor money, deemed emergency spending, has new urgency as a global shortage of chips has idled U.S. automotive plants and disrupted the production of consumer electronics.

“I have had a number of conversations with senators on both sides of the aisle and there seems to be fairly broad support for doing so,” Schumer wrote in a letter to all Senate Democrats on Sunday. The move, he added, could allow both bills to pass Congress “before the end of the year.”

The massive defense policy measure has been enacted annually for more than 60 years and typically receives strong support in both parties, making it an attractive vehicle for the China bill. A spokesman for House Speaker Nancy Pelosi didn’t immediately respond to a request for comment about Schumer’s likely plan to combine both bills.

Time is running out this year, with both chambers tied up in a drive to pass President Joe Biden’s nearly $2 trillion economic agenda and clear legislation that would fund government agencies through the end of this fiscal year.

Democrats hope to clear Biden’s plan in the House this week.

“We’re confident that this bill is going to come up in the House this week, that we’ll get a vote, it will pass and it will move on to the Senate,” Brian Deese, director of the White House National Economic Council, said Sunday on ABC’s “This Week.”

In the Senate, Schumer said work is continuing with the parliamentarian to determine whether any provisions of the massive tax and spending bill fall outside the constraints of the reconciliation process that allow it to move through the chamber without threat of a GOP filibuster.

Timing for Senate consideration is linked to completion of that process and also receipt of a score of the legislation’s costs by the nonpartisan Congressional Budget Office, Schumer said.

Schumer also said the Senate may need to act to raise the nation’s debt ceiling, although he noted the date the current limit runs out isn’t clear. He didn’t say when or how the Senate might act. The Senate is likely to agree on another stop-gap measure that would forestall a government shutdown past the current Dec. 3 deadline, a move to enable more time to complete agency funding legislation, Schumer said.

“I am disappointed that we have not yet been able to reach a ‘topline’ agreement on funding levels for FY2022 with our Republican colleagues,” Schumer wrote. “But I am hopeful that we can reach an agreement soon so that the Committees can finalize their bills and we can consider a FY2022 Omnibus bill later this year.”

The defense authorization bill, one of the few measures that Congress passes year after year, is considered must-pass because it authorizes pay increases for troops as well as hazard pay. It also includes policies to compete against strategic challengers such as China and Russia.

Schumer said in his letter that as part of the debate on the defense measure, the chamber will vote on an amendment that would repeal the 2002 authorization for the invasion of Iraq. The Senate Foreign Relations Committee in August approved legislation that would do so on a bipartisan 14-8 vote.

“I made a commitment to having a vote on this proposal in 2021 and the NDAA is a logical place to have that vote,” Schumer wrote.

The Senate Armed Services Committee approved the defense policy measure in July. The full House passed its version of the bill in September. Both bills defy President Joe Biden’s $715 billion request for the Pentagon, and boost spending authorization by $25 billion to $740 billion.